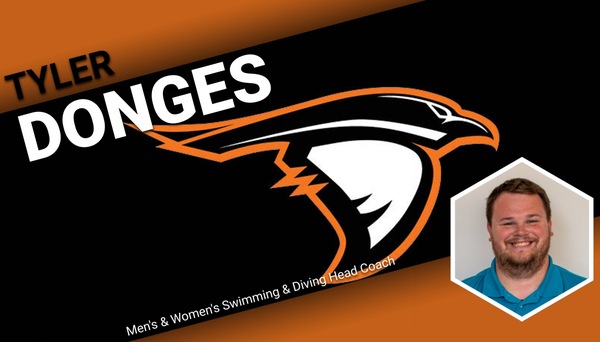 Donges preciously served as the coach and aquatics director at The Bridgewater Club. Current photo via Anderson Athletics

“Coach Tyler Donges has extensive experience coaching both swimming and diving and he possesses the mindset and commitment to build upon the solid foundation already present in the AU swim and dive program,” said Anderson Athletic Director Marcie Taylor. “Coach Donges’s prior experience as an academic advisor and instructor at the college level provides valuable insight for mentoring student-athletes academically and an attentiveness to their mental health and well-being in these challenging times.”

Donges currently serves as the coach and aquatics director at The Bridgewater Club. He oversees all maintenance of the aquatic centers and is in charge of hiring and training the aquatic center staff. In 2019, Donges filled the role of head coach at the EXOS/Bryan Glazer Jewish Community Center. He developed the swimming fitness program for the team and was in charge of recruiting for the club.

Donges owned and operated a diving club based out of Yorktown High School that is a member of USA Diving from 2011-2017. The team primarily consisted of athletes out of the East Central region of Indiana. Donges also served as an assistant coach at Yorktown High School and Yorktown Middle School from 2011-2019. During his time as assistant coach, the Tigers combined for four state champions, six medalists and 37 state qualifiers.

“I absolutely want to thank Anderson University for the chance to coach swimming and diving for such a great school,” Donges said. “I’m excited to meet the team, work to continue to build upon the legacy of the previous coaches and give glory to God along the way! Go Ravens!”

In the area of academics, Donges served two years as an academic advisor at Ball State University. During that time, Donges oversaw 450 undergraduate Psychological Science students. He instructed in the Psychology department for two years at Ivy Tech Community College and spent six months as a Math teacher at Southside Middle School in Muncie.

Donges graduated from Ball State University with a Bachelor of Science in Psychology. He then earned a Master of Arts degree at Ball State in Physical Education.

Anderson University is on a mission to educate students for lives of faith and service, offering more than 60 undergraduate majors, 30 three-year degrees, 20 NCAA Division III intercollegiate sports, alongside adult and graduate programs. The private, liberal arts institution is fully accredited and recognized among top colleges for its business, computer science, cybersecurity, dance, engineering, nursing, and teacher education programs. Anderson University was established in 1917 in Anderson, Indiana, by the Church of God.