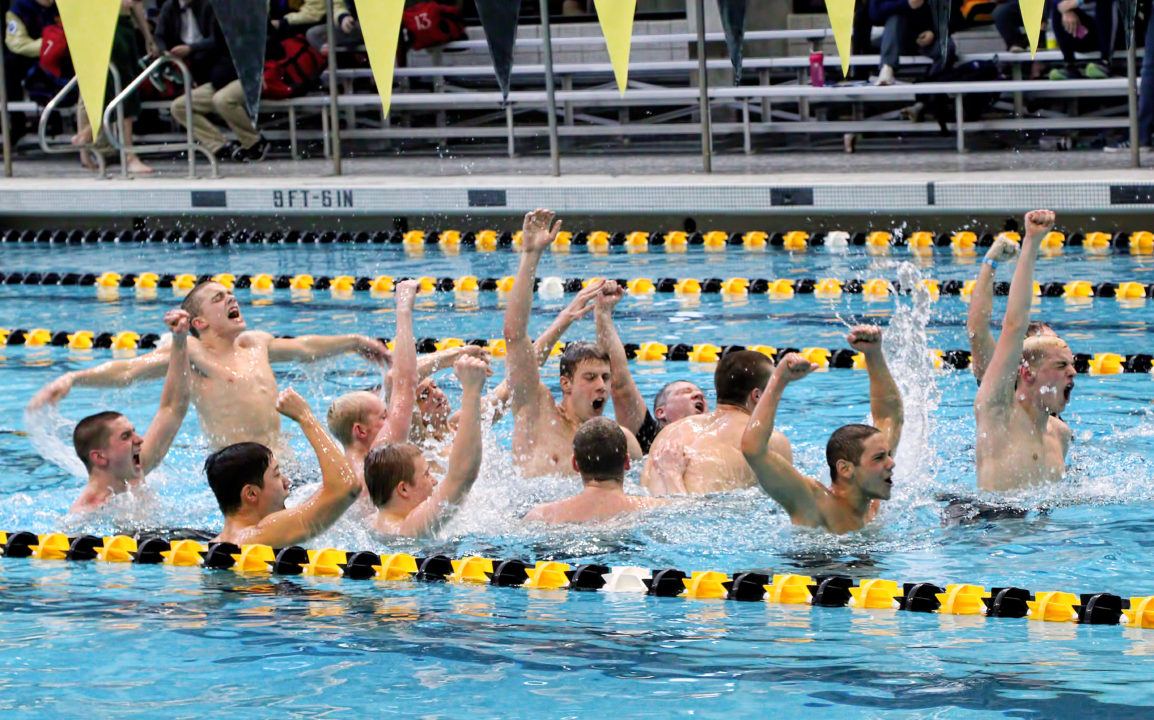 In one of the tightest state championship meets in the 82-year history of high school swimming in Iowa, the Ames High School boys came away with the title on Saturday by 1 point over West Des Moines Valley High School. That was the closest state meet since 1957, when Clinton beat Des Moines – Roosevelt by 1 point as well.

The win made for Ames’ first state title since 1982 and 2nd-ever state title. It also made Ames just the 3rd school to pull off the boys and girls double – the girls’ team won the state title in the fall.

The head coach of that 1982 was Mike Wittmer. Tying the two titles together: his grandson Ethan Johnson is a member of Ames’ 2018 state title winning team, swimming on their winning medley relay and finishing 8th in the 100 backstroke.

Down to the final relay, West Des Moines Valley were heavy favorites coming into the meet, and backed that up with a 3:06.87 – a 4-second margin of victory over the field. However, the question became whether or not Ames could finish 2nd. After taking a lead to the halfway mark of the race (they front-loaded, West Des Moines back-loaded, including a 45.58 anchor from junior Jacob Keller) – the field began chasing them down. Ames’ experience paid off, though – senior Dalton Lillibridge split 47.92 on Ames’ final leg, which was just enough to hold off Ankeny senior high by .19 seconds for 2nd place and secure a state title.

Outside of the team battle, the big story of the meet was Iowa City High’s Forrest Frazier. As just a sophomore, Frazier pulled off an unusual double. First, he won the 100 fly in 49.10 – the only All-American consideration time in the field. He then came back later in the meet with a 54.16 to win the 100 breaststroke. That swim crushed the old State Record of 55.69 set by Sean Osborne in 2003 by a second-and-a-half.

Showing off his versatility, Frazier swam 4 events and 4 different strokes: he had the fastest backstroke leadoff in the medley relay splitting 23.20, and anchored Iowa City’s 400 free relay in a 46.18 split.

The day’s other state record came at the hands of another sophomore – Cedar Falls’ Dylan Moffatt. He swam a 4:27.77 i the 500 free to win by almost 5 seconds. He broke the old record of 4:29.96 done by Cameron Kelley (currently a freshman at Minnesota) in 2016.

Also, a big name to note is Andrew Fierke. This kid is going to be extremely fast if he continues to swim through college. He was a 6:15.77 as a freshman and is now a 1:40.7 in the 200 Free. Mike Peterson has done a fantastic job with ACAC program and rebuilding the Fort Dodge site.

Timed finals?!?! I thought Illinois was a goofy. Maybe next year we can host Illinois high school champs in Iowa City.

Nope! University of Iowa doesn’t meet the Illinois hosting requirements – it’s not even close. Only has seating on 1 side of the pool, not the requisite 3.

Braden is not bashing Iowa’s pool, he is making fun of Illinois’ ridiculous requisites to host a state meet; they still have host at a 6 lane high school pool because of them. All the while having UIC or NU a stones throw away. He is well aware of Iowa’s Nat being a fantastic pool to host big meets.

My “hilarious” was in reference to the rule; not towards Braden. I’m aware of the rule and usually compare the current pools used for IHSA meet to UIC/Stevenson/NU…but to think that a truly world class pool like the one in Iowa City wouldn’t meet IHSA standards is hilarious.

I’m just glad to see they moved State from the YMCA, and to a much faster pool in Iowa City. Next thing they need to do is change the Stone Age timed finals format.

Wisconsin also has a timed finals format. Sectionals often tends to be the better meet because you have to swim fast for the hope to make it in. Time standards posted are really “last time in” times.