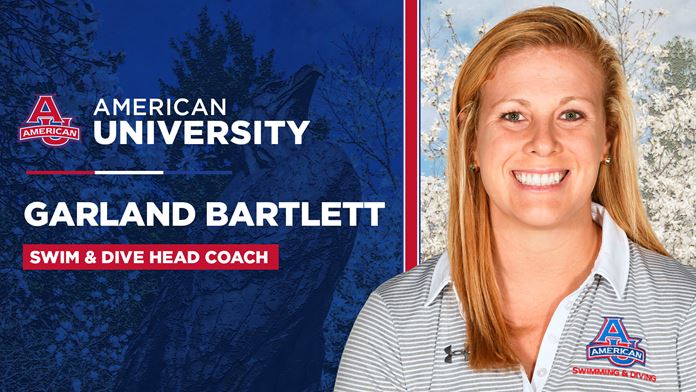 American University in Washington, D.C., has announced the promotion of Garland Bartlett to be the program’s new head coach. She has served as the school’s interim head coach for two months since the school announced in May that long-time head coach Mark Davin would not be returning to his post.

Bartlett has been an assistant with American University since 2016. While she has worked with different groups as part of a small staff for the combined-gender program, her specialty has been in leading recruiting efforts and training the distance freestyle events.

At the 2020 Patriot League Championship meet, the last full Patriot League championship event before the COVID-19 pandemic set in, the American U men and women each finished 8th out of 10 teams. The team didn’t have many individual scorers at that meet, but among them was Ellie Kight, who finished 16th in the 500 free, out of Bartlett’s distance squad.

The graduation of Liam Riebling and other top seniors will create a tougher battle for Bartlett – none of the team’s seniors opted to take advantage of the NCAA’s waiver allowing athletes an extra year of competition after COVID. With no athletic scholarships and tuition around $50,000 annually, the extra year was a tough sell. But the Eagles do have some good young pieces to build around. On the women’s side, that includes butterflier Mimi Watts, who improved her best time in the 200 fly during the season from 2:06.7 to 1:59.7. That made her one of the top performers in the conference.

American was once one of the top teams in the Patriot League, consistently competing for team titles, though they’ve slipped in the rankings since Navy and Army joined the conference in the 2003-2004 season. The team’s only top 5 finish since that expansion came in 2011, when the women placed 4th in a then-8 team conference.

Bartlett came to American from Middlebury College, where the team finished the season with four qualifiers to the NCAA Division III national championships. Prior to that, she spent two seasons as an assistant coach and recruiting coordinator at Trinity College and one season as an assistant at The College of New Jersey.

She was an accomplished distance freestyler herself as a student-athlete at Division III Franklin & Marshall College in Lancaster, Pa. She earned four silver medals, two bronze medals and a number of top-8 finishes at the Centennial Conference Championships. She still ranks among Franklin & Marshall’s all-time top-10 in the 1,650 freestyle.

Congrats Garland! Have heard nothing but rave reviews from American swimmers and coaches – sounds like a position well-earned.