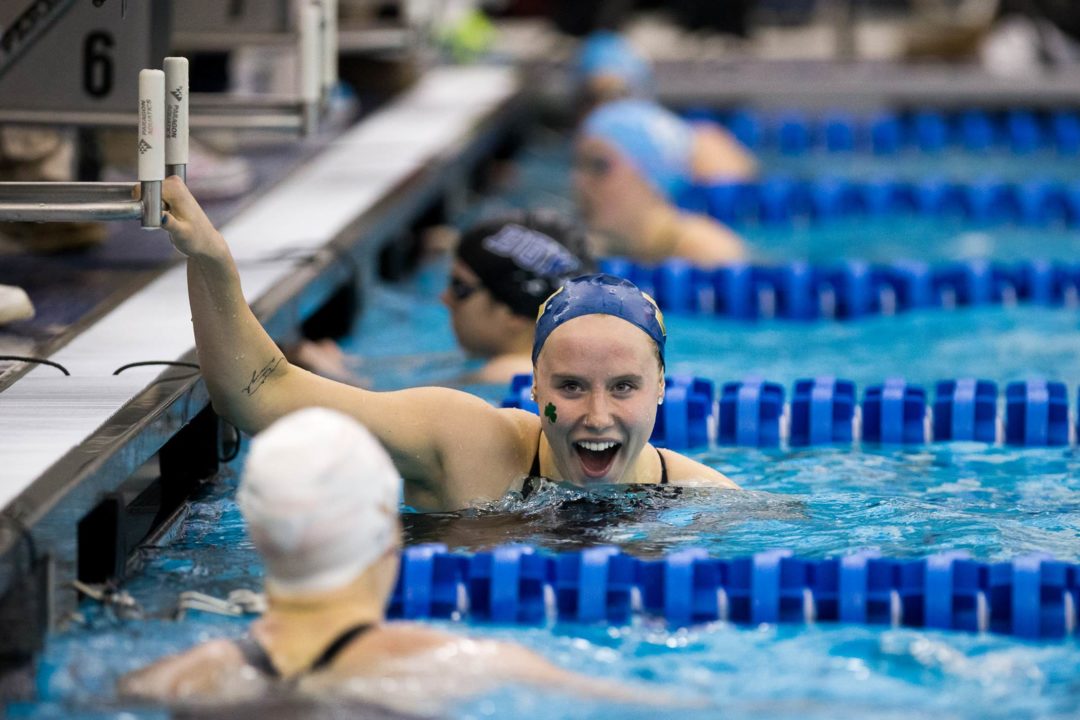 Jensen alleges that the school discriminated against her and wrongfully fired her for reporting discriminatory treatment by head coach Mike Litzinger.

The newest American, NCAA, and U.S. Open Record holder Emma Reaney has plans to spend the summer training with SwimMAC Carolina in the coming months as she heads into her senior season at the University of Notre Dame.

The Lawrence, Kansas native swam a 2:04.34 on the final day of the 2014 ACC Championships last Saturday (Notre Dame’s first championships as a member of the conference), which shocked the world and broke Breeja Larson’s old American, NCAA, and U.S. Open Record of 2:04.48.

Though that swim came across as a big surprise to a swimming community that was perhaps distracted by Larson’s own simultaneous pursuit of the record at the higher-profile SECs, both Reaney and her coach Brian Barnes said the swim was anything but a surprise to them.

“No, it wasn’t a surprise to me,” Barnes said. “That’s what’s really fun about this – when I see words like ‘stunning’ and jaw-dropping’… Emma had a hell of a summer. The conversation we had going in was all about doing something special.”

“It was maybe a little bit of a surprise,” said Reaney. “I’ve known for awhile that I was capable of a 2:04, I just didn’t know when it would happen.”

It was actually a mid-meet shift in race strategy that led to Reaney’s explosion. After a prelims swim that both Reaney and Barnes weren’t happy with, the duo decided the Notre Dame junior needed to go out faster to unlock the kind of race she was waiting for.

“That’s the great thing about Emma: Emma’s willing to take risks,” Barnes said. “I told her I thought she needed to be out under a minute, and she was immediately on board to go for it.”

The risk paid off, as Reaney’s faster front half (she got way under a minute at 59.25) led to the fastest time in American history. Not that Reaney and Barnes were fully aware of that – at least not at first.

“I had no idea what [the record] was,” Reaney said with a laugh. “And I had no idea what Breeja had gone earlier that night. I walked over to the coaches after and our assistant coach was like ‘High-five! American record!’ I really didn’t know until then.”

Though the American record was a step onto a new level for Reaney, she’s been quietly swimming at a high level for quite awhile now, including last summer’s U.S. Open where she went lifetime-bests long course of 1:07.97 and 2:25.82 to jump onto her first national team. Those times ranked her 6th and 5th among all Americans at all meets in 2013, putting Reaney on the verge of qualifying for international teams in the next couple of years (the 2015 Pan Ams team, at a minimum, seems like a good bet).

It was that great 2013 summer performance that first spurred her move to SwimMAC for the summer of 2014. Coach Barnes said he told Emma back in August that changing things up for a summer might be helpful to her as her career continued to blossom on the national level.

“I owe it to my athletes to put them where they need to be,” said Barnes. “She’s in position to graduate easily on time, and I do believe getting off campus for a summer, changing things up, will be a very helpful thing for her to do.”

Barnes was effusive in his praise for Reaney in every aspect of her swimming career, calling her an “all-star” in the weight room, an amazing teammate, and a student-athlete with a “no-limits” mentality. He credited her big improvement curve through three seasons at Notre Dame to her willingness to maximize all the resources at the school, from the coaching staff to the sports psychologist to the sports nutritionist. And he said he believes a summer training in a new high-level environment will be another opportunity for Reaney to keep improving.

Of the high-level programs in the country, SwimMAC stuck out to Barnes immediately. He coached under SwimMAC’s David Marsh for two seasons at Auburn, and the two have remained very close, both in contact and in coaching philosophy.

“When I talked to David after Emma’s record, I thanked him for teaching me so much,” Barnes said. “I told him, ‘there’s a little bit of David in that swim’.”

Barnes said he utilizes much of what he learned from Marsh with the Notre Dame Fighting Irish program, so the transition for Reaney should be relatively smooth.

“I really share the same values as David, and I know he’s dedicated to developing Emma as a person and not just a swimmer, just like we’ve always been at Notre Dame,” said Barnes.

Another big factor was Marsh’s work with 2012 U.S. Olympian Micah Lawrence, who swam collegiately at Auburn and still competes for SwimMAC. Lawrence is among the best in the world in the 200 breast thanks to her work with Marsh, and ranks as an ideal training partner for Reaney.

Reaney expressed her excitement to swim with an athlete of Lawrence’s calibur, and also noted the successes of Katie Meili, another SwimMAC breaststroker, as a sign of good things to come.

SwimMAC has become a hotspot for college swimmers to train at over the summer. Among those we’ve seen do it lately include Ohio State All-American Tim Phillips, 2012 U.S. Olympian Cammile Adams from Texas A&M, and of course Lawrence, whom Marsh put on the 2012 Olympic team in the 200 breast.

Reaney is also an All-American type 200 IM’er at the college level, though in long course her breaststrokes have been her go-to races so far; she’s been 2:14.01 in the 200 IM, which is 14th among Americans.

Both Reaney and Barnes said they haven’t discussed at all where Reaney plans to train after her graduation in 2015 – “I’m not going to coach two plays ahead,” Barnes said – but SwimMAC certainly has to be among the contenders, especially if this summer continues Reaney’s meteoric rise. For Barnes’s part, he’s confident that will be the case.

“When she returns to Notre Dame, she’ll be even better,” he said. “That I know.”

Emma Reaney is not a name I admit to having really heard before, but this sounds like a great move for her, she and Micah Lawrence could really push each other. After Soni’s retirement, this is good news for USA women’s breaststroking, and with Breeja Larson going well in the 100 as well, they just have to take it to LCM.

I really hope for great things from Micah Lawrence this year, that breakthrough in Barcelona must have given her so much confidence. She has such a beautiful stroke too, always a joy to watch.

Yes. Very good choice for Miss Reaney.
Training with Micah Lawrence will be a very good thing for her.

ds/er: Have an absolutely fun time learning from such great coaches this summer. Congrats on this opportunity you have worked so diligently for. love, grdi