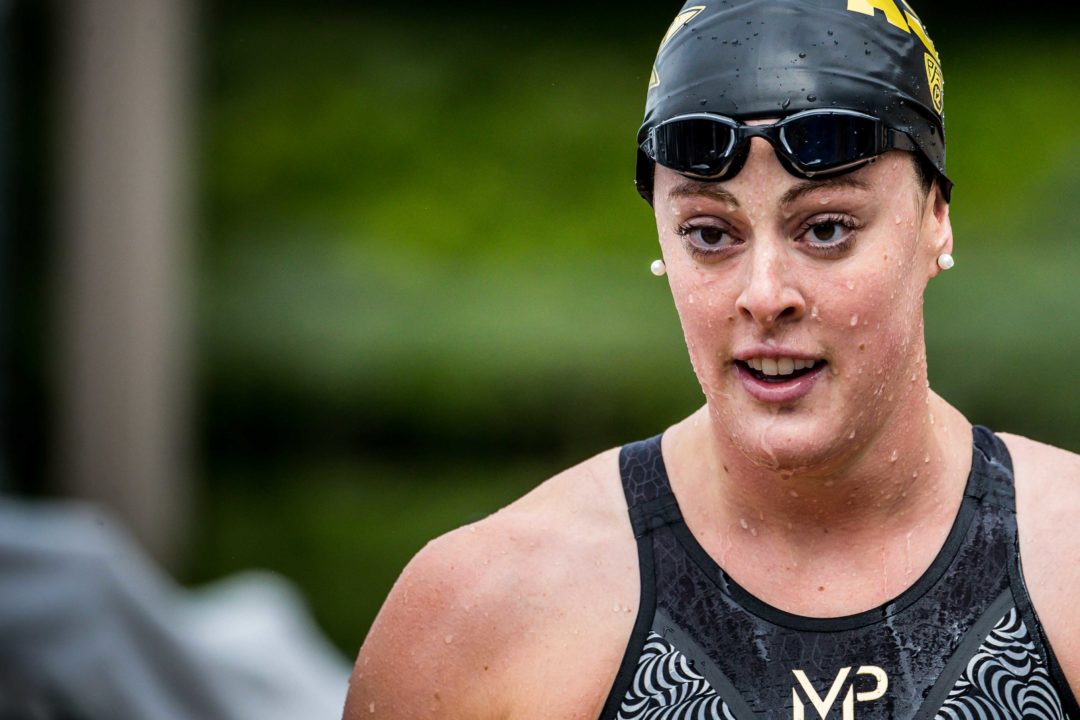 US Olympian Allison Schmitt has been awarded a $12,000 “Work the Dream” grant by the Fran Crippen Elevation Foundation (FCEF). She is the 11th athlete to have been awarded a grant by the foundation, which was created by the family of US open water swimmer Fran Crippen to honor his memory after he died during a race in 2010 in the UAE. He was 26-years old at the time of his death.

“As the years pass since Fran’s death, we are resolved to keep his memory alive – his passion, his mission and his resolve to be an advocate for the sport he loved,” said Fran’s mom Pat Crippen. “Having read Allison’s essay it was clear to us on the grant selection committee that Allison would be great ambassador for FCEF. Her essay reminded us so much of Fran – she dreams big and works hard, she is willing to make sacrifices to pursue her goals, and she recognizes the need to advocate for what is right.  She is ‘working the dream’.”

The 29-year old Schmitt, a native of Canton, Michigan, lives and trains in Tempe Arizona under Olympic coach Bob Bowman. In her career, she has won 8 Olympic medals, 4 of which were gold. That includes the 2012 Olympic title in the individual 200 free. Her career has had ups-and-downs too: she missed 3-straight World Championship teams after making the 2011 team, but persevered to qualify as a relay participant at the 2019 World Championships. She has already put up a fast time in the 100 free this weekend at the Pro Swim Series meet in Greensboro as she continues a late-career resurgence.

Schmitt has become a vocal advocate for mental health in athletes as well.

“We are thrilled to have Allison as our grant winner and really feel her passion for this sport,” FCEF spokesperson Teresa Crippen said of the choice. “Allison is a unique individual that has high goals for the pool, but also balances her life outside the pool. The work that she has done to bring awareness to mental health in sports is to be commended and is an extremely important legacy that Allison will leave on this sport. She has worked hard to command the respect of athletes around her by her actions. She touches many people’s lives without even knowing it. Her positive, honest attitude toward swimming and life’s events make her a role model for all and the FCEF is happy to support Allison on her journey in the sport of swimming and beyond.”

The purpose of the grant is to support Fran’s idea that a “person’s passion should not be hindered due to financial reasons.” The FCEF grants fulfill a wish made by Fran in a letter to the family of Andrew Godbe who supported him while he was training with coach Bill Rose at Mission Viejo. In that letter, he hoped that one day he would be able to pay their generosity forward, and via this program, his family is bringing that to fruition.

Past Recipients of FCEF Work the Dream Grants:

Humble amount of change, not bad not bad

We have a swimmer who won two individual gold medals in London Olympics, who won three gold medals in Olympic relays. She set remarkable world record that stood for 7 years. And despite her international swimming career was only three years short nobody feels uncomfortable to call her great. Now we have a swimmer who was a member of all these aforementioned relays, won gold and silver individual Olympic medals showing outstanding performance, set the record that is still 7 years later is out of challenge of the most decorated swimmers like Ledecky, Sjostrom, Pellegrini The swimmer who was in competition not for three years only but has medals from 3(!!!) Olympics already and very possible will be Olympian one… Read more »

how can you call allison schmitt great and still constantly belittle katinka hosszu’s achievements? hosszu is far more successful than schmitt ever was and had much better consistancy. schmitt is deserving of all the recognition she gets but again, I see some hypocrisy here yozhik

that boggles me too a bit here …

Hosszu has 3 Olympic medals. Schmitt 8. How is that far more success? Seems like a lot less to me.

Allison is a 29 year old with a degree . Its adultescence to be dependent on pithy grants .

Kinda hard to make a ton of money swimming rn

Plus, you wouldn’t enjoy an extra 12k?

What for? I could get that on a Troll Farm interfering in some election or referendum .& have a whole lotta fun .

Then why are you wasting your time here? Go get your money and fun. Everybody will win.

I am contracted to my good friend Joe.. I was a bit worried when he started talking to a wall but I got on social media quickly & blamed the camera guys .