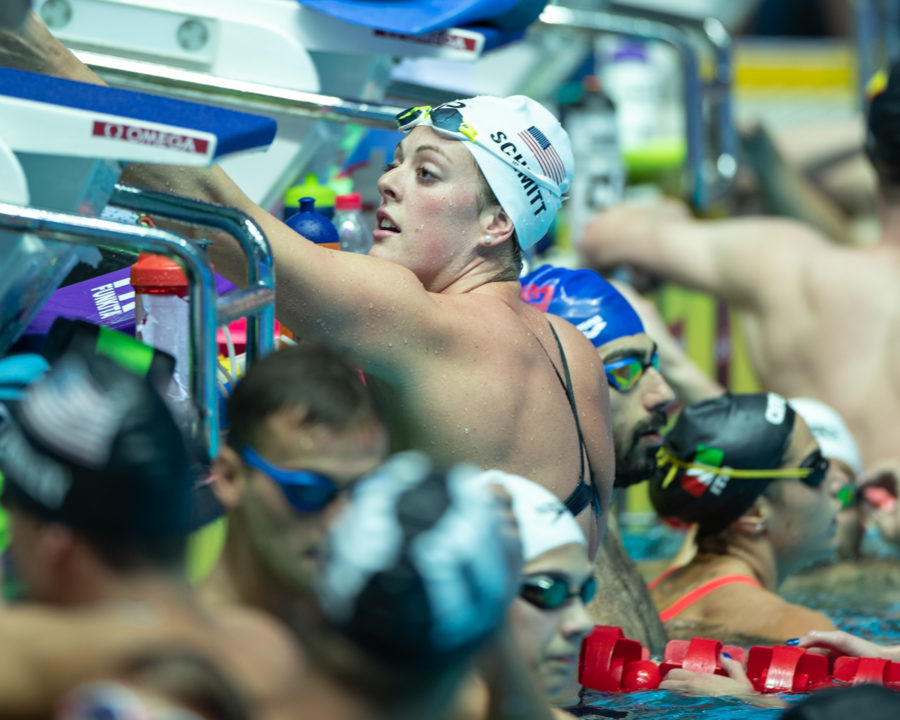 Allison Schmitt clocks 54.41 in the 100 LCM freestyle, faster than the lead-off leg at the 2019 World Championships in Gwangju, Korea earlier this summer. Archive photo via “Rafael/Domeyko Photography”

In Thursday’s finals session at the Pro Swim Series stop in Greensboro, American swimmer Allison Schmitt clocked a 54.41 in the 100 free. This swim was faster than that of her lead-off leg in the 400 LCM free relay at the 2019 World Championships this summer, marking a successful season debut for the 29-year old 4-time Olympic champion.

At Worlds, Schmitt split 55.04 on a flat-start relay leadoff leg, and was a little faster a few weeks later at US Nationals with a 54.81 in the individual race. Her time on Thursday marked her best flat-start time in the 100 free since the summer of 2018, where she was 54.24 at US Nationals (the time that earned her a relay spot for Worlds) and a 54.24 a few weeks before at a Pro Swim Series stop.

On Thursday, Schmitt finished 2nd in that race behind fellow Rio Olympian Simone Manuel, who won in a time of 53.44 – a good early-season marker for her as well. That swim was on par with her first swim of the 2018-2019 season, which was a 53.38 at Winter Nationals (now known as the U.S. Open).

Schmitt returned to competition in 2018 after a 20 month break due to her battle with depression in order to take care of her mental health and well-being. In 2019, which was her first World Championship team since 2011, Schmitt helped lead Team USA qualify for the final heats in the 4×100 and 4×200 free relays with her prelims swims as well as earned herself a 14th place finish in the individual 200 LCM free. She continues to train with her long-time coach Bob Bowman, now based out of Arizona State University.

Looking good for her chances in 2020! Hope she stays dropping time throughout the season and performs well at trials.

Good job Allison: $2000 in one session being second twice behind super swimmers who cover at highest level all Freestyle events. Her sprint result was actually close to her personal best. Unfortunately it can’t be said about her 400. I hope that she still has a lot of stamina for 200 race.
It will be fair to call her 1:53.61 not only American record but a world record as well. No way Pellegrini was ever able to swim that fast without assistance of high-tech suit.

You don’t know that, Yozhik. It is not Federica’s fault if those suits were legal at the time of her peak. But she is no Paul Biedermann …

Yes, it is my supposition. But you have to agree with me that if she didn’t have any advantage swimming in such a suit she wouldn’t use it. Her suit record is only 0.63 sec faster than Schmitt’s textile one. Do you think that high-tech suit gave her so little advantage? That is less than 0.6%. I can’t give you reference to particular research but from different discussions I got an impression that the effect was more significant than that. Of course it is in average and in each individual case the improvement of performance was different. But still I don’t think it was that little.

I don’t know what you mean by “best”. Sometimes best and fast isn’t the same.

I remember reading an estimate of 0.7s per 100m as the advantage based on an article from 2011.

Yozhik, you misread me. I do not deny that the supersuit helped, why should I? It is a solid fact. All I am saying is, we do not know how much it helped (it did not help everyone the same way) and Federica never got a chance to prove herself without the suit in those 2009 WC; so, we do not know whether she would have swam in 1:53 or 1:54-something. I believe that 2009 was a peak year for her (regardless of suit) based on: age; time difference from next competitor (almost 2 secs); stamina (at the time she swam the 200, the 400 and the relay’s 100 free); her being reigning Olympic champ, a feat she never repeated.… Read more »

Ok, accept your arguments and let’s stop this discussion peacefully at this point. Both 1:52.98 and 1:53.61 are greatest achievements in the history of this event and there is no much sense in comparing them. Let’s consider them incomparable for the sake of respect to swimmers who did it.

Also, same as me you don’t know that 2009 season was her peak. What is the basis for such statement. Her peak, no matter how strange it may sound, was this season at age of 31. And that is outstanding achievement. Only Schmitt, Ledecky and Sjostrom were faster and only once.