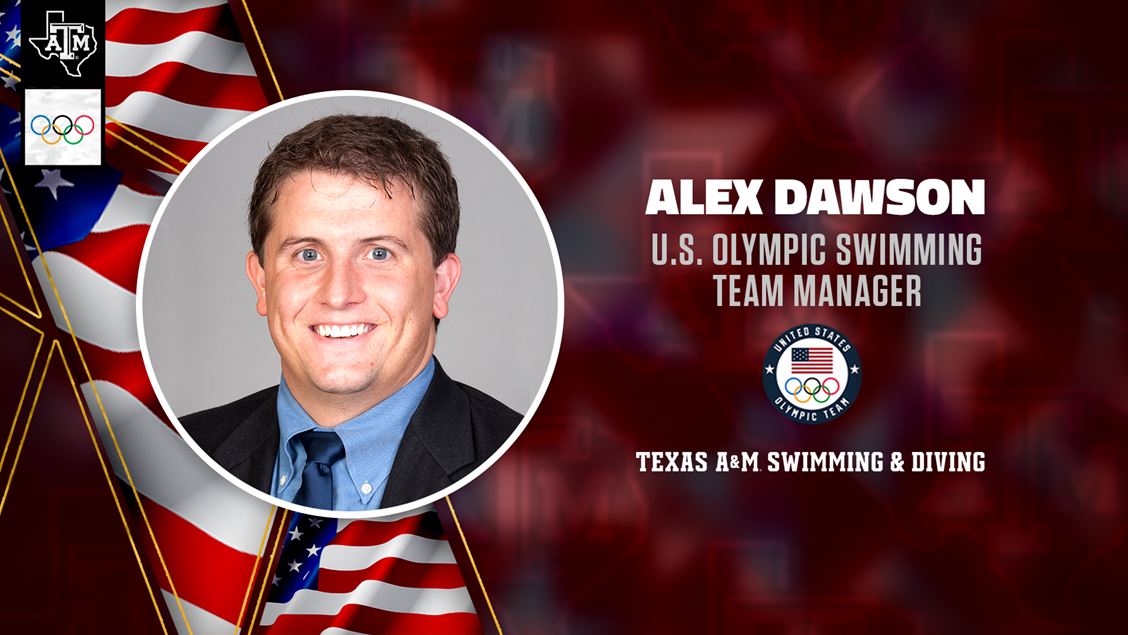 Alex Dawson, who was the head manager of the U.S. team at the 2019 World Championships, will serve in that role in Tokyo this summer as well. Current photo via Texas A&M Athletics

Texas A&M Swimming & Diving Director of Operations Alex Dawson was selected to serve as the team manager for the U.S. Olympic Swimming Team at the upcoming Tokyo 2020 Olympic Games.

His role with the Olympic Team will be similar to his role with Texas A&M, including coordinating athlete movements, meals, practice times, and other logistics so that the coaches can focus on their more technical duties.

Dawson worked in the same role at the 2019 FINA World Aquatics Championships and was the assistant manager at Worlds in 2017.

He also served as a high performance consultant for the USA Swimming National Team at the 2008 and 2012 Olympic Team Trials, the 2009, 2013 and 2014 USA World Championship Trials and the 2013 World University Games.

A four-year letterwinner at A&M, Dawson has held his position of director of operations for both the men’s and women’s swimming & diving teams since graduating in 2007.

In both 2012 and 2016, University of Miami head swimming coach Andy Kershaw was the team manager.

“Having a strong team behind the team is vital in the success of our athletes at international events.” USA Swimming National Team Managing Director Lindsay Mintenko said. “The carefully developed trust and confidence in our support team, built in the years leading up to the Olympic Games, allows our coaches and athletes to focus on the task at hand and succeeding at the highest level. I am confident they will all help prepare our athletes to reach their potential in Tokyo.”

USA Swimming has named their entire 7-member Support Staff for the Games. That’s one fewer than they’ve had in previous years, where an assistant manager was also sent. This is part of an overall effort to reduce the number of bodies at the Olympic Games as part of the Tokyo 2020 COVID safety measures.

Dr. Jim Lynch and Dr. Tad Kremen have been selected as the team physicians. This will be the second consecutive Games in this role for Dr. Lynch, who also served in a similar role for Team USA at a variety of major competitions, including the 2015 and 2019 FINA World Championships and the 2018 Pan Pacific Championships. Dr. Kremen, who currently serves as a team physician for the UCLA Bruins NCAA Division I athletics team and as the Assistant Orthopedic Physician for the NBA’s Los Angeles Lakers, will be making his first Olympic Games appearance. He also recently served in the role at the 2019 FINA World Championships, as well as both the 2016 and 2018 Short Course World Championships. Former National Team swimmer Dr. Matt Lowe will be the team chiropractor.

Sooo he’ll get the water bottles for the swimmers? Cool. I’m sure his parents are proud 🙄

At 2019 FINA World Aquatics Championships Ledecky got stomach flue and lost 400 and 4×200 to Australians. I’m superstitious and am not sure about those battles. 😀

What an ignorant statement. For a coach, I’m surprised you don’t have at least some type of perspective on how difficult the logistics of this type of a trip (including camp) would be to manage. Huge undertaking and with the highest stakes (relative to sport). You need good people doing different things and all of them are important.

First of all, that’s not what he does. Second, I’d be fired up to get water for our Olympic swimmers!

If they need someone to kick water bottles I know a guy.

Not just any tap water we talkin bout. Cmon now

Congrats Alex. Proud of you.

Congratulation, Alex. Also very happy for Matt Lowe. Our son learned how to swim Eddie Style first from Matt about 10 years ago. A great guy. Hopefully, the circuit will close when they meet again at Paris 2024, our son swimming there (not for USA, dont get too jumpy y’all).