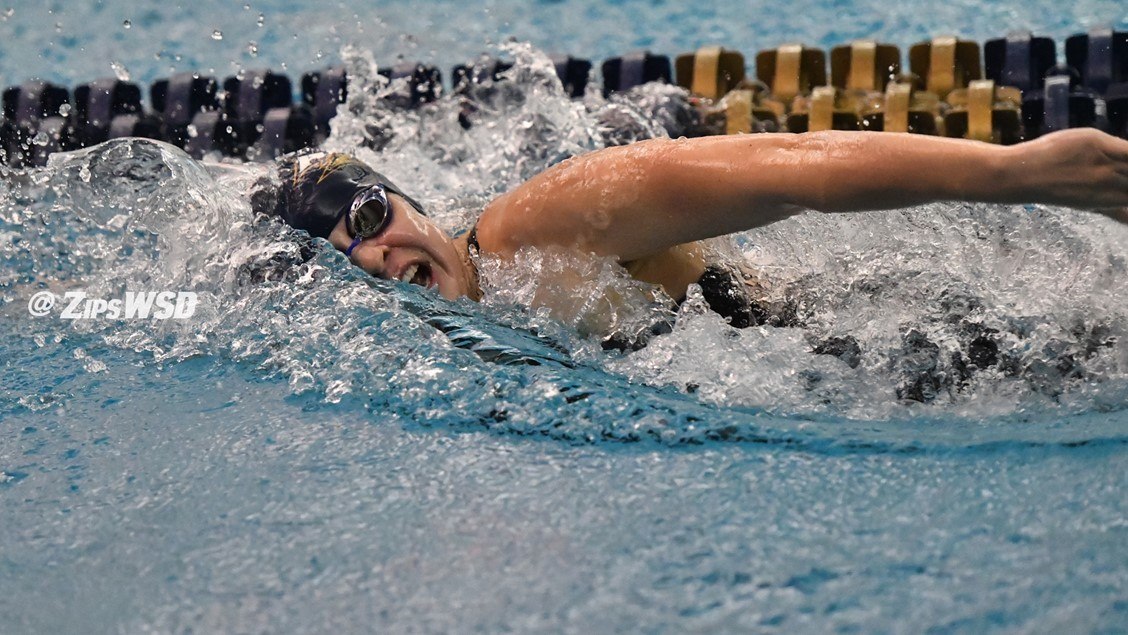 Duquesne and Akron squared off in a dual meet on Saturday which featured a unique format with 17 "mystery" events being picked just moments prior to the beginning of each respective race. The Zips won 247-154. Current photo via Akron Athletics

Paddy Johnston will arrive at Cleveland State with time that, when converted, would have won the 100/200 fly handily at 2021 Horizon League Championships.

PITTSBURGH, Pa. – The University of Akron swimming and diving team showed its versatility as it topped Duquesne, 247-154, Saturday afternoon at Towers Pool in a unique mystery dual.

“Hats off to Duquesne and their staff. With this unique format there were many moving parts,” said head coach Brian Peresie. “They pulled it off without a hitch.”

In the non-traditional format, each team had preset line-ups. When the pre-selected swimmers were behind the blocks, the scorers’ table drew the event from a hat and announce it. The moment it was announced was the first time the swimmers knew what event they would be swimming.

Diving and relays were the only known events for the day, while all individual swimming events were the ‘mystery events.’

“The mystery format was very exciting and engaging throughout the entire meet,” Peresie said. “It gave the swimmers a chance to not have the normal stresses they might experience while getting ready for their normal races. Instead, it was a different kind of stress that they got the opportunity to experience in competition.”

A team comprised of all freshmen in Avery Movold (Prince George, British Columbia), Andrea Fischer (St. Paul, Minn.), Sarah Watson (Winnipeg, Manitoba) and Sofia Henell (Linkoping, Sweden) placed first in the initial swimming event of the dual, the 200 medley relay, with a time of 1:45.21. Another Akron team came in second, while a Duquesne team rounded out the top three.

Junior Mackenzie Vargas (Roseville, Calif.) was behind the blocks as one of her signature events, the 200 butterfly, was luckily drawn. The junior came in first with a time of 2:05.50, while junior Morgan Waggoner (Fremont, Ohio) touched second at 2:08.14.

Up next was the 400 individual medley. Akron took the top two places in the event with freshman Olivia Gardner (Bromsgrove, England) coming in first at 4:28.44. Senior Emma King (Centerville, Ohio) earned second place with a time of 4:32.06.

In the 100 freestyle, Movold swam to a first-place victory in a time of 52.08, while sophomore Brooke Lamoureux (Belleville, Ontario) took third (54.69)

Taking a break from the mystery events, the 200 freestyle relay was raced. The team of freshman Lauren Cooper (Dublin, Ohio), junior Ellie Nebraska (Delaware, Ohio), Waggoner and Fazekas took first, clocking in at 1:37.22, while a Duquesne team took second.

Watson and Nogaj both won their second individual events of the day in the 200 and 100 backstroke, respectively, while Gardner won her third event, the 200 individual medley, with a time of 2:07.69.

Back-to-back individual medley races were drawn, as the 17th event of the day was the 100 IM. Henell turned in a first place finish, touching at 1:00.24, while three Duquesne rounded out the top four.

No stranger to the 50 backstroke, Fazekas took first in the event with a time of 26.13. Movold earned her second win of the day as she turned in a time of 23.99 in the 50 freestyle.

The Dukes won the final three events of the dual, including the 1,000 freestyle, 50 butterfly and 400 medley relay.

Overall, the Zips proved to be versatile and well-rounded throughout the dual as they won 19 of the 22 events.

“All in all, I think it was a huge success and I look forward to doing it again,” Peresie said.

Up next, the Zips will compete at the Shamrock Invite, Jan. 25-26, in Notre Dame, Ind., hosted by Notre Dame.

PITTSBURGH – Duquesne and Akron squared off in a dual meet on Saturday which featured a unique format with 17 “mystery” events being picked just moments prior to the beginning of each respective race. The Zips, winners of the last five Mid-American Conference titles, came away with a 247-154 victory over the Dukes in a battle of reigning conference champions.

Both teams had a lineup in place prior to each event. When swimmers approached the blocks, the scorers’ table picked events out of a hat before announcing which particular event would be raced for 17 of the 20 swimming events on the day.

The Duquesne divers battled the Zips at Carnegie Mellon University prior to the swim portion of the meet. Adrienne White (Gibsonia, Pa./Hampton) led the Dukes with a fourth-place finish in the 3-meter (234.75) while Sawyer Weitzel (Celina, Ohio/Celina) led Duquesne in the 1-meter (214.88) with a fifth-place showing.

Head coach David Sheets: “The format Brian (Peresie) and I put together for this meet created a unique event for both teams. It was nice to see the kids get up and race in events they normally don’t compete in. From a team perspective, the ladies did very well, competed and gave their best in every race. We are in the home stretch now and will start working on fine tuning every aspect of our swimming.”

Head diving coach Charlie Hauser: “The divers are getting back in to competition mode. We had some really good corrections on things we have been working on, and Ashley (Dias) had a personal best. We need to tighten up some little things but this weekend was a good stepping stone to the point we want to get to.”

NEXT UP
Duquesne concludes its home stand hosting a tri-meet against Ohio and Xavier next Saturday, Jan. 19 at Towers Pool.

Love the concept. What other schools do this type of meet?