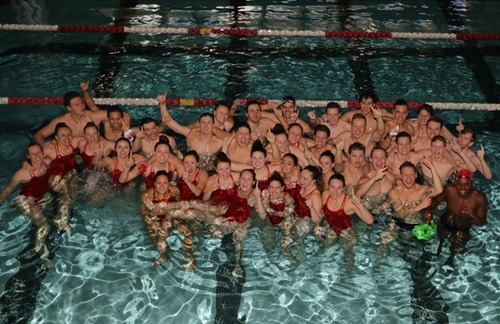 For the last 21 years, the Dalhousie University men’s team has dominated the Atlantic University Sport (AUS) Championships, winning every team title dating back to 1998-99. However, this year, that streak looks like it could very well be coming to an end.

This season, Acadia has proven that they’re the team to beat. The Axemen have faced off with the Tigers (Dal) four times — once in October, twice in November and once in January — and they’ve come out on top four times.

The closest matchup between the two did come at the only real “rested” meet so far this season, the Kemp-Fry Invitational, but Acadia still topped Dalhousie by 122.5 points. (That competition also included McGill, who competes in the Quebec conference, placing first which would’ve impacted how the two Atlantic teams would score relative to one another compared to if they were the top two teams competing.)

The men expected to lead the way for Acadia include fourth-year Brett Liem and first-years Dean Sangster and Gordon Shortt.

All three are qualified for the U SPORTS Championships which will run Feb.20-22 in Victoria, BC.

In addition to some top-end talent, another thing on Acadia’s side in the upcoming meet is numbers. Dal began the season with 17 men and are now down to 14, while Acadia has a full 18-man roster.

In total, the Tiger men have won 25 of the last 32 AUS titles, with the University of New Brunswick winning the seven others all between 1990 and 1998. Acadia has won three titles in AUS history, dating back to the first meet in 1954, with the last one coming 39 years ago in 1981.

On the women’s side, Dal has had a similar run of recent success, winning 18 consecutive titles dating back to 2002. They are expected to win once again based on this year’s rankings.