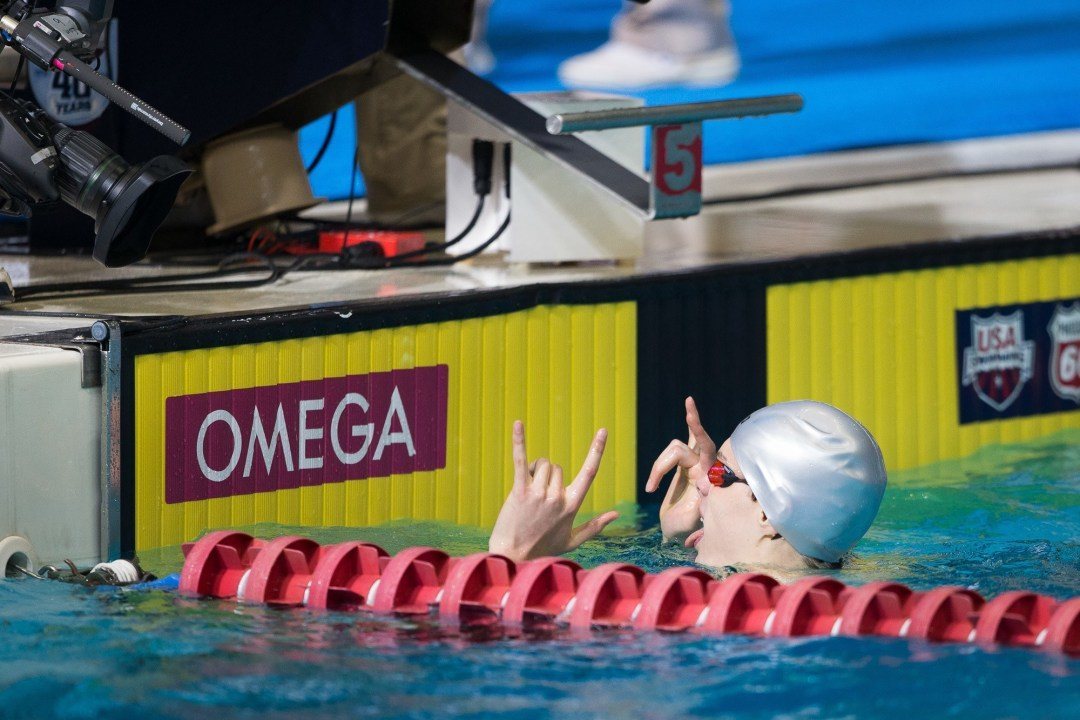 Ryan Harty was almost hooking his horns already in this photo from the 2013 World Championship Trials. Below, he completed the motion with a commitment to the University of Texas. Archive photo via Tim Binning/TheSwimPictures.com

Harty, who qualified for the Junior National Team in the 100 meter back, is actually fairly versatile beyond just that stroke. His best event in yards is the 200 back, but he has Winter Juniors cuts or better in 8 different yards events and 9 different meters events.

He’s also been 52.2 and 1:54.9 in the 100 and 200 yard butterfly races, and given that those were done at simple mid-year meets, he’s probably capable of more impressive numbers there as well to round out his lineup.

Harty should be an NCAA scorer immediately for the Longhorns as a freshman, and could slide right into the role that will be vacated after this season with the completion of eligibility of senior Kip Darmody (6th at NCAA’s last year in the 200 back, 3rd in the 100 back, and also a big contributor to the Longhorns’ free relays). Except that Harty, with an outstanding breaststroke, is an even better IM’er than is Darmody, adding another wrinkle to his lineup.

Harty has some ties to the Lone Star State: his mom is originally from Houston, though she didn’t go to Texas.

Ryan seemed to be such a nice young man….met him on a flight to Atlanta…was so hoping he would choose Georgia or Auburn but best of luck at Texas. Our loss is their gain,

AWW u r going to miss being Gator. But still wishing u the best stay well love to u & all ur loved ones Barbara & Santo

I’ve noticed a lot of the top male recruits who are rising U.S. national team potentials in the recent year have been very versatile a rise strokes and distances. That is great to see as the big fear for U.S. swimming has been the sprint free focus of NCAA scoring