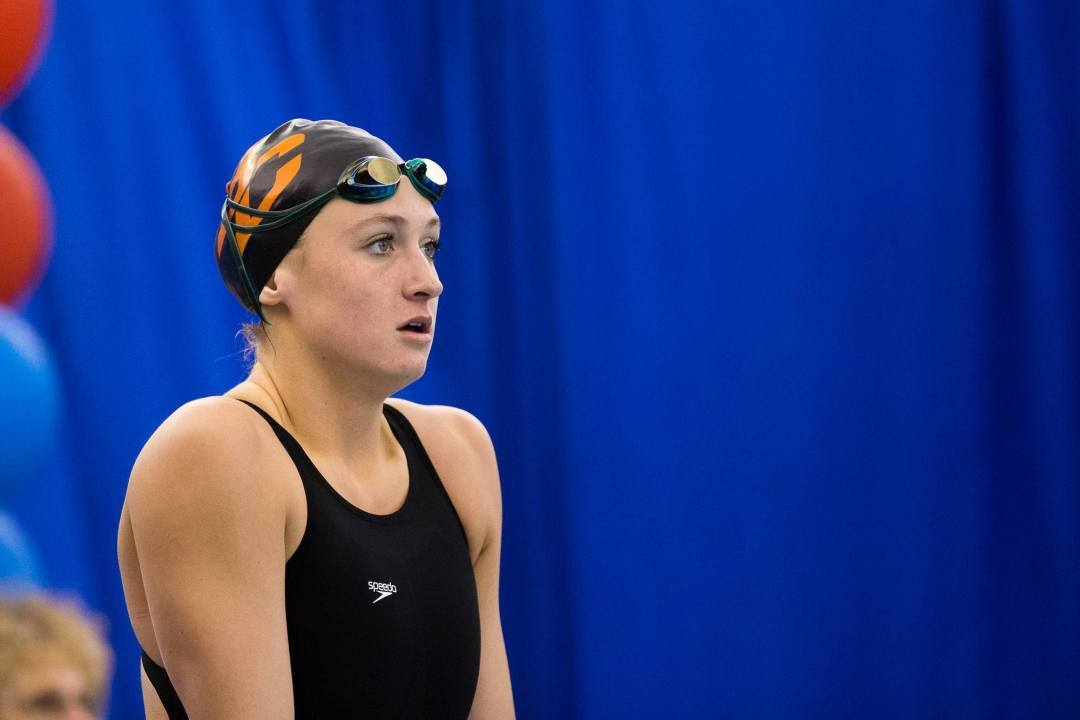 Taylor Garcia has made a fall-themed commitment to the University of Arizona. Courtesy: Shawnda Garcia

Taylor Garcia, the number 8 recruit in the women’s class of 2015, has verbally committed to the Arizona Wildcats.

Garcia is member of the USA Swimming Junior National Team and one of the top backstrokers in the class. In addition to the backstroke events, she has the potential to contribute in the 100 fly and in the sprint freestyles, and will likely see a 100 fly/100 back double on day 2 of NCAA’s as a freshman.

Garcia is the second-best all-around backstroker in the class behind only Cal commit Kathleen Baker.

That makes an even 10 verbal commitments for Arizona still standing, including another top-20 recruit Daniela Georges on Saturday. The strongest leg of Arizona’s medley relays in the 2014-2015 season should be backstroker Bonnie Brandon, who has been as fast as 51.87 in the 100 (she was only 52.5 last year).

For that reason, in the one year of overlap between the two, Garcia may be used on the butterfly leg for Arizona, where they will be significantly more wanting. Garcia has also been 23.46/51.21 in the 50 and 100 yard frees.

Garcia first rose to prominence while training with Michigan Lakeshore Aquatics, but followed coach Don Kimble to nearby Byron Center in the summer of 2013.

Rick DeMont and staff’s other verbals include #13 Katrina Konopka, making three out of the top 17 recruits in the country as ranked by SwimSwam.

The remaining uncommitted swimmers in the class are:

Wow. If they pick up Bilquist (likely) that is going to be an outstanding class. Especially it Ledecky delays until 2016 that will make a major impact an NC’s

Why is it likely Bilquist will go there?

Amazing class Arizona is poised to sign this year…good for them! Seems like they will now be returning to the power program they’ve been in the past. Will make things that much more interesting in the larger landscape of D1 W Swimming…

Dgroup, I agree with Swimmer418’s question…why do you think Bilquist will sign with Arizona? She does have ties to the Wildcats program…but do you think there is enough scholarship money still on the table? And, is she a tandem pickup with Toris? Meaning, DeMont will need to have $ for two more athletes…after already getting 10 so far this go-around? Would be amazing if he can do that!

Not much longer before the unspoken for recruits decide.… Read more »

SO SO SO proud of you, Tay. Cannot wait to see what the future has in store for you down in Tucson. Go Green and Bear Down! Love you, Shelb

So excited for you Tay! All of us involved in Holland Swimming, HPS, and the community of Holland are so proud of you! You have worked so hard to get to this place. You can now enjoy the rest of your Senior year (even tho I know the work won’t stop) And you are going to a WARM place!! Blessings to you on all of your future endeavors. We are here for you always! xo

What about mccullagh…where is she looking?

Arizona is very lucky to be getting our Taylor, look forward to visiting there and cheering you on one day Tay x