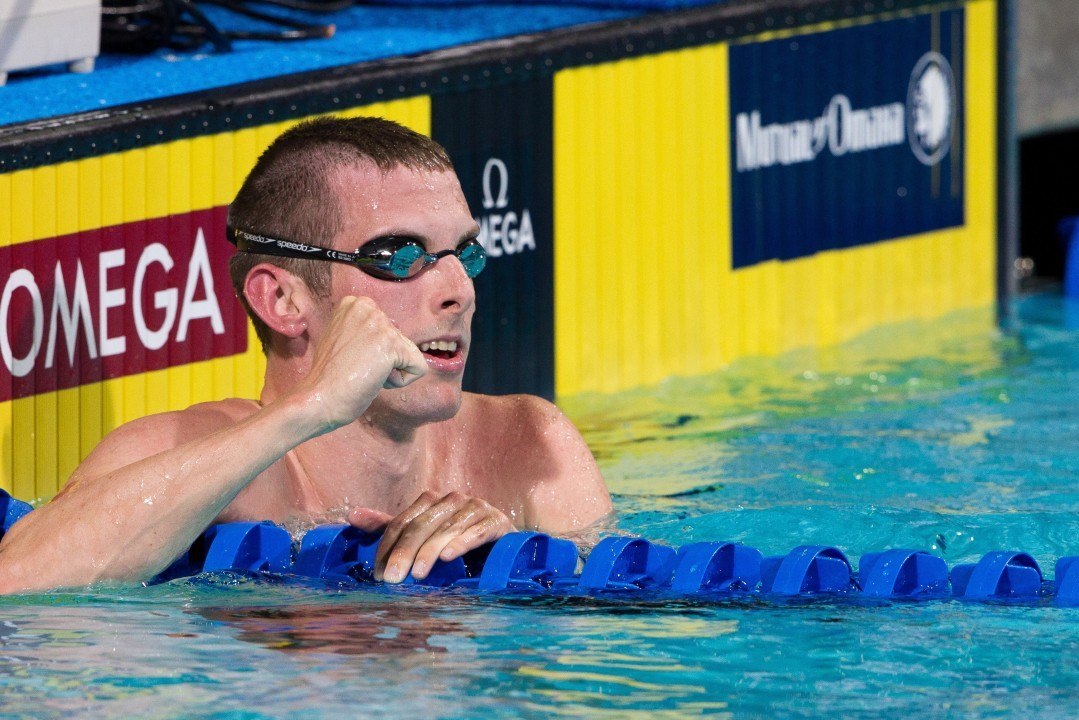 Ryan Cochrane was one of the standout performers of the Games in Glasgow, swimming the fastest 400m freestyle this year. Here are 7 things we learned during the 2014 Commonwealth Games. Stock photo via Tim Binning/TheSwimPictures.com

Another episode of the Empire Games, err, Commonwealth Games are over, and with it the 71 represented countries pack it up and leave Glasgow. There was some fast swimming at the Tollcross International Swim Centre, with 20+ Games records being broken, a world record in the 4x100m free relay and a near miss in the 50m breaststroke.

Here are 7 things we learned over the week in Glasgow:

The Aussies were extra dominant. Not much of a surprise to anyone, the Australians dominated the meet, winning 57 medals in the pool. One of the world’s swimming superpowers, the Australians not only dominated, but did so better than ever, surpassing their ow record medal haul of 56 medals that they won at the 2006 Melbourne Games.

The 4x100m medley men victory for England made some history. The team of Adam Peaty, Adam Barrett, Adam Brown and Chris Walker-Hebborn swam a 3:31.51 on the final night of competition at Tollcross to not only hold off James Magnussen and the Australians, but to also beat them for the first time in 64 years.

Wallace Finds Redemption (and Some Freedom). Scotland’s Dan Wallace’s year got off to a rather auspicious start. There was that wee little incident (see what I did there?) in Florida, which resulted in an indefinite suspension from the team. He won the 400m IM in Glasgow, and by celebrating he mounted the lane rope and bellowed, “For freedom!” evoking Scottish hero William Wallace. His silver medal in the 200m IM would be the medal to tip Scotland past their previous total medal haul record, all of which has helped his Tinder profile blow up over the past week.

The women represented. The swimming was faster on the women’s side, if we are looking strictly in terms of records. The ladies would break a combined 13 Commonwealth Games records, as well as the 4x100m freestyle relay world record done by the Australian quartet of Bronte Campbell, Melanie Schlanger, Emma McKeon, and Cate Campbell (3:30.98). On the other side of things, the men would break a combined 8 Commonwealth Games records.

Roland Schoeman told he’s too old to continue swimming. Promptly wins silver in 50m butterfly. Schoeman, who is no stranger to the Games – this was his 5th appearance – was sent a text before the 50m butterfly “suggesting he was too old to continue.” If ever there was a way to motivate a swimmer, this is definitely one of the best (Phelps famously used Thorpe’s criticism of him in 2004 as fuel), and Schoeman is no exception, using it to power his way to a 23.13. The time was 1/100th of a second faster than his own Games record set in 2006.

Ben Proud Beats Best Time, British and Games Records. Twice. Proud, who dipped under the 22 second mark for the first time in his career, swam a blistering 21.76 in the semi-finals of the 50m freestyle to beat Brent Hayden’s Games record of 22.01 from 2010. The 19 year old’s semi-final lightning bolt was done under the watchful eyes of Prince Harry, as well as the Duke and Duchess of Cambridge. His gold medal performance (he’d post a 21.93 in the final), would come after also winning the 50m fly earlier in the meet, where he similarly broke the Games and British marks.

Ryan Cochrane’s Speed Matures. With Cochrane taking less of a load of training this year to finish school at the University of Victoria, the focus had been on developing speed with coach Randy Bennett. Glasgow would support this decision, with Cochrane swimming a 3:43.46 in the 400m freestyle to win the first of his two golds. Not only was it a best time, but he dropped 1.4 seconds off of a PB going as far back as the 2008 Beijing Games. Cochrane’s time is the fastest in the world so far this year, a nice feather to put in the cap after he failed to make the final in the event in London, and placed 4th last year at Worlds.

The English men were impressive beyond words. They are now beginning to show the world they will be a force in certain events.