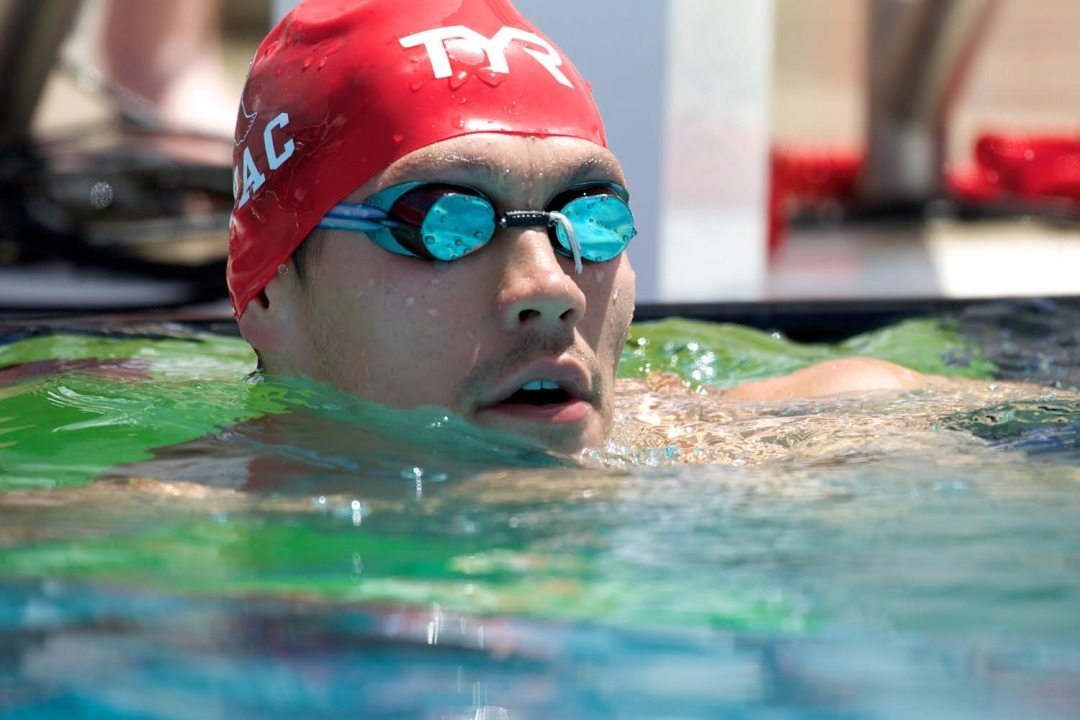 Arkady Vyatchanin took second in series points last year while sweeping the final 8 backstroke races of the tour. He'll try to come back from a foot injury with his 2015 debut in Orlando. Archive photo via rafael domeyko, rafaeldomeyko.com

Each individual Olympic event awards prize money to the top 3 finishers along with series points.

The top male and female finishers in overall series points at the end of the series will earn a 1-year lease of a BMW* automobile and a $10,000 bonus.

*The BMW prize is reserved for US citizens only, while the cash bonus can go to an athlete of any nationality

Athletes not competing in Orlando are marked with an asterisk.

1. Beisel back from injury: Current series points leader Elizabeth Beisel will use Orlando as her comeback meet from an injury, albeit a minor one, from what we’ve been told. Beisel pulled out of the BHP Billiton Aquatic Super Series in Australia last month. USA Swimming downplayed her absence, calling it a “precautionary” scratch from the team due to a minor groin strain that she suffered at the last Pro Swim Series event in Austin. With second-place point-earner Katie Ledecky skipping this meet to do typical high-schooler things like smashing American records, Beisel isn’t in much danger of losing her perch, but how her body responds to a tough event lineup will be very important to Team USA’s prospects at Worlds this coming summer.

2. Men’s 200 free: The first men’s race of the weekend might be the race of the entire meet. The psych sheets are loaded, with nearly the entire top 16 seeds coming in under 1:50. That field includes Olympic gold medalists Conor Dwyer, Ryan Lochte and Matt McLean, all of whom were on the US 800 free relay in the London Games. Joining them are recent NCAA standouts Michael Wynalda (famed for his 1:30.6 split on the US Open record-setting Michigan relay last year), Connor Jaeger (also on that relay), Joao de Lucca (the 200 free champ at the past two NCAA Championships) and former Wisconsin star Michael Weiss. Throw in Club Wolverine’s Michael Klueh, Dutch Olympian Dion Dreesens and Australian stud Bobby Hurley among several others and you’ve got a dynamite field to kick things off Thursday.

3. Breeja vs Alia: The breaststroke races set up an extremely interesting showdown between short course American record-holder Breeja Larson and Jamaican Olympian Alia Atkinson. Both Texas A&M alumni, Larson and Atkinson combine to hold the 9 fastest short course 100-yard breaststrokes in all of history. Larson is in her first season as a pro, and won the event in Austin, while Atkinson is red-hot, coming off of a world record and gold medal at the Short Course World Championships. Atkinson also won the 100 in Orlando last year, as well as sweeping the breaststrokes in Mesa.

4. Men’s 100 fly: Last year’s ACC Swimmer of the Year Pavel Sankovich is set to make his Pro Swim Series debut as a post-grad. Sankovich competed at the European Championships after wrapping up his decorated career at Florida State, but according to USA Swimming, didn’t compete for almost half a year before showing up in one short course meet a few weeks ago. Sankovich will get to take on Arizona pro Giles Smith plus Venezuela’s Olympic star Albert Subirats in what should be a great race.

5. Women’s IMs: Making an appearance all the way from Scotland is Hannah Miley, a British national record-holder and one of the world’s top IMers. Most exciting about her entries is a looming showdown in the 400 IM with Elizabeth Beisel. Provided Beisel is fully recovered from that groin injury, that race should pit two elite 400 IMers against one another in a mid-season swim that will put a premium on toughness and finishing through major pain. Beisel won the 400 IM over Caitlin Leverenz and Katinka Hosszu in Austin, but will have at least an equally tough test getting by Miley in Orlando. The 200 IM should be just as exciting, with Leverenz and Melanie Margalis holding the top two seeds above Miley and Beisel.

6. Men’s 400 Free: This is another loaded event, but one with multiple new faces compared to the 200. Most notable will be the battle between Connor Jaeger and Michael McBroom, both young professionals having outstanding seasons in the distance freestyles. Matt McLean and Conor Dwyer should also be factors in the final individual event of day 2. Jaeger won the race in Austin, and really needs a win in Orlando to pass up Nathan Adrian and potentially even Tyler Clary in the series points standings.

7. Points for Lochte? One of the world’s best-known swimmers, Ryan Lochte had a bit of a rough go of things in Austin, coming home with just a single Pro Swim Series point. That came courtesy of a 3rd-place finish in the 400 IM, an event Lochte implied was a training swim more than anything. If the 11-time Olympic medalist wants to get into the points hunt on the Pro Swim Series, he’ll have to make his move in Orlando, where he’s entered in the 200 free, 400 IM, 100 back, 200 back and 200 IM.

As usual, we’ve got a couple bonus storylines for you, and this time around all three involve notable swimmers making under-the-radar appearances in Orlando:

1. Kosuke Kitajima: Once the world’s most unbeatable breaststroker, Kitajima has seen age catch up with him over the past few years. But at 32, Kitajima continues to compete, and will swim the 100 and 200 breaststrokes plus the 200 IM.

2. Mie Nielsen: Based in Denmark, Nielsen doesn’t make many appearances in the United States. But she’ll be showing off her world-class backstroke in Orlando, coming in as the top seed in the 100 back.

3. Arkady Vyatchanin: Vyatchanin went on a tear through the men’s backstrokes on last year’s circuit, going 8-for-8 in the 100 and 200 back over the final four meets of the tour. But the Russian ex-pat injured his foot last fall and missed the Minneapolis stop of the Pro Swim Series (then called the “Grand Prix” series). Other than two swims at a Serbia Grand Prix in November, Vyatchanin hasn’t raced since last July, but he’ll look to rekindle the fire of last season’s tour with his debut in Orlando.

excited to see Kitajima – one of my favorite swimmers

There are a few big names, but all in all, this meet seems likely to be the least compelling of the long course Pro Series meets. Although, like the article says, the 200 free should be interesting. You’ve got the virtual locks for the USA men’s 4×200 team (Lochte, Dwyer, McLean), then that postgrad group of Weiss, Wynalda, and Kleuh, all of whom are likely to be in the mix come next summer. With a lot of those guys in their mid-to-late 20s, this could very well be their last Olympic cycle.

I just realized that these “Pro Am” meets are the Grand Prix.

Floppy,
You are right, that “Grand Prix” sounded like a racing event – and that is one of the reasons USA Swimming and Arena changed the name. However the new name is just “Arena Pro Swim Series”, not “Pro Am”, so I personally don’t think it sounds like a golf tournament.
USA Swimmings Matt Farrell wrote a really good article on the whys and hows of the branding/logo change for this event and others you might find interesting as I did. His title is great – showing they realize they can’t please everyone!
“I Love/Hate That Logo: A Look at the USA Swimming Event Logo Process” http://sportsmarketinglab.com/2015/01/08/i-lovehate-that-logo-a-look-at-the-usa-swimming-event-logo-process/