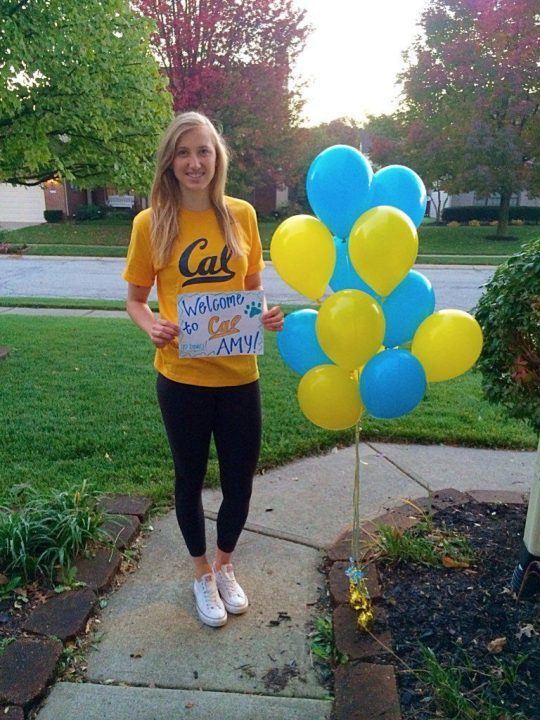 Amy Bilquist has committed to swim for Teri McKeever at Cal, giving the Golden Bears that lockdown sprinter they've needed for years.

Carmel, Indiana sprinter Amy Bilquist, the 5th-ranked recruit in the class of 2015, has made her college decision, and will be a California Golden Bear.

Bilquist is a prototypical sprinter, at around 6’2″ or 6’3″ tall, and won a trio of individual USA Swimming Junior National Championships this summer.

This gives Cal their 3rd top-5 recruit in this women’s class, which probably pulls them slightly ahead of their bay-area rivals Stanford in terms of overall class rankings to this point. #4 Katie McLaughlin and #3 Kathleen Baker previously pledged to Cal.

Cal has been searching for a lock-down freestyle sprinter to end their relays ever since Liv Jensen graduated. Sophomore Farida Osman has shown some potential to fill that roll early this reason for Cal, and with Bilquist’s addition, the Golden Bear free relays start to look as impressive as their medleys.

While best known for her sprint freestyles, Bilquist is also a top-tier backstroker. She’ll overlap with Liz Pelton and Rachel Bootsma for a year, but after that could contribute for Cal on the medley relays there as well. The 100 back is the event that earned Bilquist a spot on Team USA’s Short Course World Championships team in December.

As an individual, Bilquist is already fast enough to score at NCAA’s as a freshman in the 50 free, and has two years to improve that standing. She’s also already on the cusp of individual scoring-worthy times at NCAA’s in the 100 free and 100 backstroke as well.

Bilquist swims at Carmel High School and with the Carmel Swim Club. She won the 2014 Indiana State Championships in both the 50 and 100 freestyles shortly after moving there from Arizona, where she spent her freshman and sophomore years of high school.

She chose Cal over Arizona, USC and Georgia.

I love how you all assume that you know everything about the coaches, the programs, the ins and outs–as if “time” is the only measurement of a programs or swimmers success.
Does anyone here ever look PAST the swimmer and what else they have done or are doing? Or the struggles of… Well, Life?? One off year doesn’t equate to failure just like one win doesn’t equate to success. It’s the WHOLE package. Let’s remember college swimmers aren’t just athletes, they are STUDENT athletes.

But keep up the rants, and making assumptions it’s all very amusing.
🙂

(1) Happy for my Bears, but I agree with a few other posts that it would be great for more schools to also have success in enrolling top echelon swimmers (Top 50 or so).

(2) Depending on where the last few Top 20 are planning to matriculate, Cal had to recruit hard or Stanford women would most likely rule the top spot for 5 years.

(3) There are good signs out there: I am impressed with Minnesota’s program and you can say the same for a couple of other MId-west squads. Duke is finally giving scholarships which could affect Cal and Stanford down the road, Toy is obviously not throwing in the towel at Florida and getting some very… Read more »

Wonder if there has been a bit of a Missy factor going on here? Just like Natalie has been said to be one of the many factors influencing Missy & Bootsma to choose Cal.

Based on the responses, there is a fine line between “Devil’s Advocate” and “Troll”. 😀

Once more, for the record: Cal has a fantastic program. It’s a great school (my parents went there). Teri McKeever is an awesome coach who knows how to develop talent. The past year doesn’t indicate overall, undeniable success. (btw, EVERY backstroker was slow in the outdoor pools this summer, not just Cal’s. Most NCAA backstrokers get to focus 100% on SCY, without training for a completely different LCM race). I’m sure Amy will do just fine there, whatever her goals are.

BUT (of course there’s a but):
As some others hinted at: Getting all the best swimmers training together doesn’t guarantee the best results.… Read more »

We know that Cal has a problem of breaststrokers.
But does Cal has decent divers for the next 5 years?
I don’t know much about diving but I know that Stanford has recruited Gracia Leydon Mahoney who is among the best juniors in the world.
Diving can make the difference in a very close battle between both teams.

Diving continues to be a chronic problem at Cal. Current diving facility is third world. Cal divers train at Stanford (the horror!?!) once a week. Kahley Rowell was a two-tine All-American and Durden finally spent money to sign a diver in his last recruiting class. Cal Aquatics has planned a new training facility with modern diving facilities, but they’ve upped the ante to build a full blown arena. If the Golden Bears finally get upgraded facilities and some divers, Teri and Dave might finally be able to get into NCAA title contention.

Does kinda crack me up to see some of the venom about Cal swimming here. There are tons of genuine friendships between Cal and Stanford swimmers and Stanford… Read more »

Finally get into title contention? You realize the Cal men are the reigning NCAA champions and the women are already contenders…. Unless you’re referring to divers specifically?

The comment about Ebola was a good laugh though

Great get for Cal! They are loading up with so much talent in yet another class- cant wait to see them all compete under the same cap.

Does anyone with a little more knowledge of the Cal coaching have an understanding of how the “training groups” work at Cal? It is my understanding that Terri and Kristen are the only two coaches on the women side, correct? How do they balance all of the different training groups (distance-cierra runge, mid-missy, caroline, cammile, sprint- kaylin bootsma, IM- leverenz, li, pelton etc etc etc) with just two coaches on staff? Does the team usually train as a singular unit and not really emphasize different training groups besides on a set or… Read more »

‘Baby bears’ is UCLA’s mascot. Just fyi, the headline is like saying..”commits to Rick DeMont and Arizona, looks forward to becoming a Sun Devil next year.” Huh?

Watch out for Duke the next couple of years. They are offering scholarships now to the women and have been attracting top recruits the last two years. Now the women will have a choice of top-notch academic schools .