50 Days Out From Rio: A Look At The History of the Men’s Olympic 50 Free 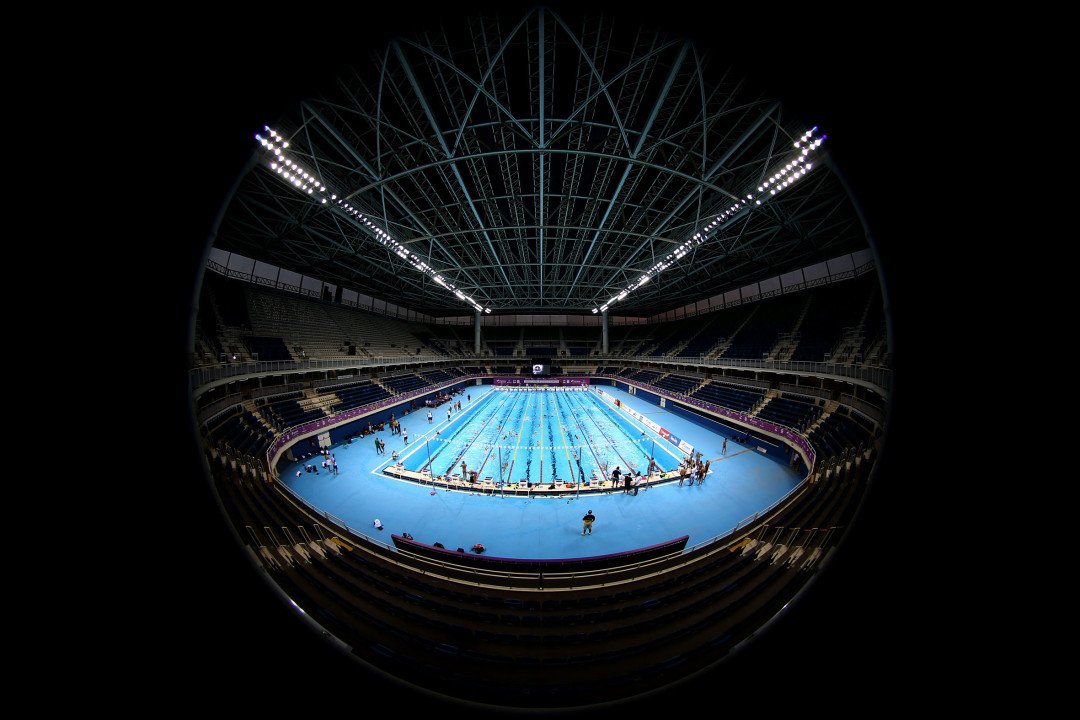 Today marks 50 days from the start of the 2016 Olympic Games in Rio de Janeiro. So to commemorate, we’re looking back at every men’s medalist in the 50 freestyle throughout Olympic history. Archive photo via Satiro Sodré/ SSPress

Today marks 50 days from the start of the 2016 Olympic Games in Rio de Janeiro. So to commemorate, we’re looking back at every men’s medalist in the 50 freestyle throughout Olympic history.

Metric system enthusiasts beware! For as much heat as the United States high school and college systems take for competing mainly in short course yards, the first Olympic 50 free in modern history actually took place in a yards format.

The 1904 Games were the first to feature the 50 free, which saw the U.S. stack the 6-person final with 5 Americans, only for Hungary’s Zoltan Halmay to pick up the win in 28.0 seconds. Scott Leary and Charles Daniels claimed the other two medals for the home nation.

The sprintiest of events then went absent for more than 80 years, not resurfacing until the distant future: 1988, when technology had advanced enough to puff up human hair-dos to their extreme limits, and Marty McFly was already testing out means of time travel.

The first time the event was taken back out of cold storage was at the 1988 Games in Seoul, South Korea. Avenging their nation’s loss from 84 years ago, Americans Matt Biondi and Tom Jager crushed the field for a gold/silver sweep.

The two had been trading the world record back and forth since 1985, but just four months before the Olympics, South Africa’s Peter Williams stole the record from both at a meet in Indianapolis. But in Seoul, Biondi broke the world record with a 22.14 and Jager was 22.36.

By 1992, the Soviet Union had broken up, but that didn’t stop Alexander Popov from putting together one of the most impressive sprinting dynasties in Olympic history. At age 21, Popov won Olympic gold at the Barcelona Olympics in 1992.

Then in 1996, Popov was back this time beating American youngster Gary Hall Jr. and Brazil’s Fernando Scherer with a 22.13.

Popov would also win the 100 free in both 1992 and 1996, becoming the first man to sweep two events over two Olympics since Johnny Weissmuller in the 1920s.

In 2000, Popov finally broke the world record (which had stood a full decade under Jager) with a 21.64 at Russian Olympic Trials. But a poor race at the Sydney Olympics allowed for the rise of three hugely memorable Olympic figures.

Americans Hall Jr. and Anthony Ervin tied for gold in 21.98. Hall, of course, is known as one of swimming’s most colorful personalities, and Ervin took almost a decade off after his Olympic gold only to return to the U.S. Olympic team in 2012 in an inspiring comeback at age 31. He’s still competing for another Olympic berth in just a few weeks.

Bronze went to Pieter van den Hoogenband of the Netherlands in 22.03. Van den Hoogenband – known as The Flying Dutchman – is still one of the most successful swimmers in Dutch history, and won the 100 and 200 frees at those 2000 Games.

The 2008 Beijing Olympics are still remembered as the media height of the super-suit era, with buoyant, rubberized full-body swimsuits pushing times to absurd extremes – particularly in the sprint freestyles.

The world record – which had stood 8 years after Popov – suddenly fell four times within two months. Australia’s Eamon Sullivan and France’s Alain Bernard were the two culprits, slowly inching the record down to 21.28.

At the Olympics, though, it was Brazilian star Cesar Cielo who took the gold in 21.30. Cielo would ultimately take the world record down to 20.91 a year later. That mark is still untouched today.

That brings us to the last Olympic cycle, in which France avenged its loss to Cielo with Olympic gold. It was Florent Manaudou (still perhaps the favorite to win again in Rio) who beat Cielo, going 21.34. American Cullen Jones was 21.54 for silver, and Cielo snuck out the bronze in 21.59.

Further back in the field were ghosts of sprinting past: Ervin in 5th, Schoeman in 6th and Sullivan in 8th.

In just 50 days, the Olympics will return, and shortly after that, we’ll see just the 9th Olympic 50 free title handed out on the men’s side.

Manaudou is the favorite after blowing out the field at World Champs last summer. But the next big things from most of the major historic sprint free powerhouses will have their own say: American Nathan Adrian, Brazil’s Bruno Fratus and Australia’s Cam McEvoy.

The current season’s world rankings are below. With just 50 days to go, the next chapter in the men’s 50 free story is on the cusp of being written:

On the Men’s events at Rio, would Manaudou be the most heavily favoured to win an individual event? Probably second behind Peaty in the 100 Breast.

Fratus is the only one I could see dethroning him.

6
-1
Reply
SwimmerFoxJet
Reply to  On the top

I think that would be Katie Ledecky in the 400 and 800 free. If you are talking about men, maybe.

7
-4
Reply
Irish Ringer
Reply to  On the top

I don’t think so and that’s no slight to Florent, but in that short of a race any mistake can cost you the race. I agree the closest thing to a sure win is Ledecky. She’s several seconds ahead of her competitors.

0
0
Reply
CBswims
Reply to  On the top

I see Manaudou going 21.1 or 21.0. I don’t think anyone can match that so he will be the big favorite

Nathan Adrian goes 21.2 at trials I think. And gets silver at Rio at least. I could see Adrian beating him though.

I think Dressel will get there first.
Adrian may beat Manaoudou for silver, though.

i see Manaudou third actually with a Big upset

Possibly, I would be surprised. But nothing impossible.

Dressel? I think Manaoudou beats him, he may even beat Adrian.