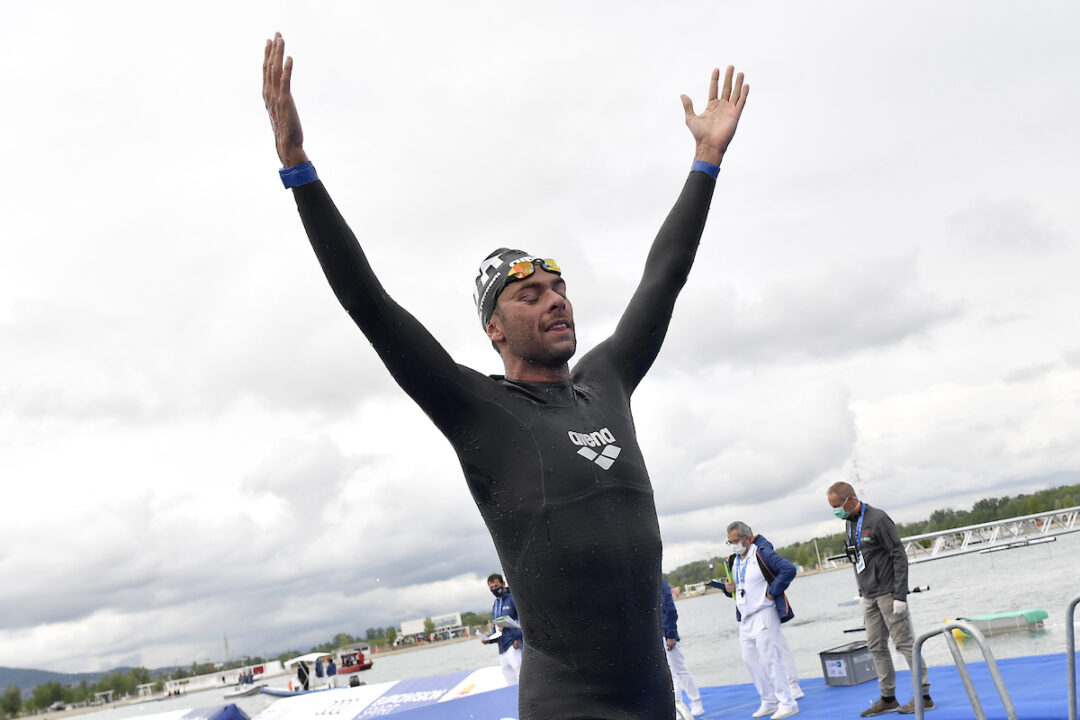 Few things are as brave as leaving a certain path for an uncertain one, and the idea of taking two parallel streets to achieve a single dream doesn't always double the chances of success, but perhaps cuts them in half. Current photo via Andrea staccioli Deep Blue Media

Imagine, if you can, that you are nearly 22 years old and have just won an Olympic gold medal. To have won it with a memorable performance, with a great race, one of those classic distance wins that was built lap-after-lap with the final result that can’t be taken for granted, because a blackout is just around the corner.

Imagine, if you can, to have won it after a long period of work and sweat in the water, and add the weight of the expectations of an entire nation, that places all the pressure on your shoulders, considering that medal almost a duty, something that is only waiting to be collected.

Finally, and this is perhaps the most complex part, imagine what you would do next, after reaching your dream, after feeling the deep relief of being able to avoid what many would have considered a failure. What would you do after winning an Olympic gold medal?

The truth is that knowing what clicks in an athlete’s head after winning an Olympic gold medal is a privilege reserved for a few. And even if you want to ask those few, the answer is that everyone achieves success through their own, very personal journey. A unique story. A story that stands by the athlete on the podium. Some, as we have seen, get lost, while others shine for a long time thanks to the reflected light of that precious metal.

Gregorio Paltrinieri, Olympic champion of 1500 meters freestyle at the Rio 2016 Games, after winning the highest competition of his sport, has decided to raise the bar.

In 2012 the Tunisian Oussama Mellouli managed to win two Olympic medals in what, technically, are two different sports, by FINA’s definition (though different events of the same sport according to the IOC): swimming and open water. The African champion, who had won gold in the 1500 free in Beijing 2008,  4 years later, at the Aquatic Center in London won the bronze, and the title went to China’s Sun Yang (also crowned by a still-surviving World Record). Then, a few days later, Oussama became the first, and to date the only, athlete to have won the 10km in open water with an Olympic medal already hanging from his neck.

Sometimes, in order to dream big, it’s necessary that other Great Ones show us the way. And perhaps it was precisely thinking about the Tunisian’s path that Gregorio Paltrinieri, after putting the Rio gold in the drawer at his parents’ home, decided to dive into a new adventure, carrying on the sport that gave him glory and meanwhile learning a new sport from scratch, which he did not know at all, except for a few sporadic youth competitions.

A jump into the dark, that darkness that sometimes comes suddenly in the sea, when the holes created by nature remind you that on this Earth we are just small guests.

Gregorio Paltrinieri‘s journey to Tokyo 2020 is a wide tour, which makes a stop in Australia, where he trained for a few months to break the monotony, to learn, to know and grow.

But it’s also an inner journey, made during the lockdown, when he decided to change coaches a few months before the Olympics. He chose an open water coach, but has repeatedly affirmed that he has not lost focus on pool competitions and signing the new European record on his return after the 2020 lockdown.

From the gold of Rio, to the flight to Tokyo, Gregorio was still there, always among the best of the best in the world. Certainly with some ups and downs, adding the training in the pool to the saltier ones in the sea, but always without ever hide his intentions, his goal.

About 10 years after Mellouli’s achievement, the scenario of both races is very different from that of London 2012. Athletes have increasingly specialized in a single event and we must consider the addition of the 800 freestyle in the Olympic program: the idea of being able to excel in two very different events is ambitious and perhaps even a little risky.

Few things are as brave as leaving a certain path for an uncertain one, and the idea of taking two parallel streets to achieve a single dream doesn’t always double the chances of success, but perhaps cuts them in half. But anyone who knows Greg knows that this is the only way he likes to live: with his head held high, with a sly smile, and with the next, bold, goal in mind.

Maybe not all of you know that Aglaia Pezzato is a former Olympian finalist in Rio and a World Championships medalist with the Italian Relay, other than the journalist who’s providing us with this content. Thank you!

I really enjoyed this series. Thanks, Aglaia!