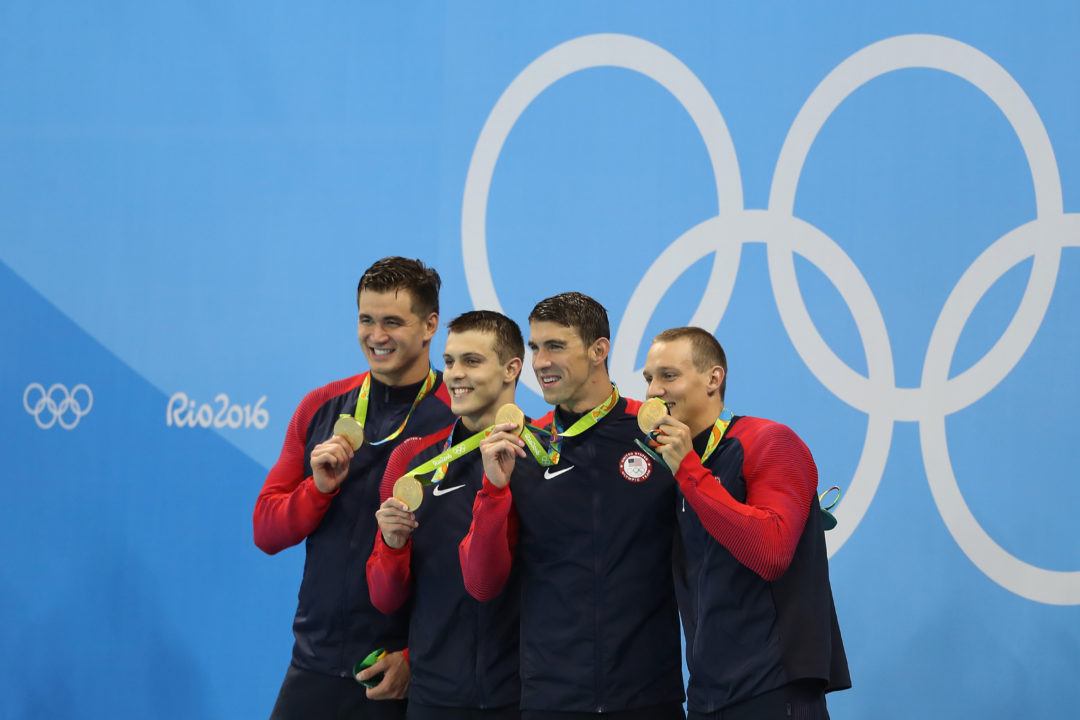 Reminisce with Charles Hartley on the top 5 most unforgettable swimming moments of the 2016 Rio Olympics. Current photo via Simone Castrovillari

“I Can’t Believe That Just Happened.”

Neither could we. She trailed Housszu, who had already won two Gold Medals over Dirado earlier in the meet, chased her down in the last 25 meters and got her hand on the wall first.

The unforgettable part of Dirado’s performance was two-fold: the comeback victory that showed her grit; and her genuine surprise at winning the race. We believed her when she said “I can’t believe that just happened.”

She didn’t expect to win. Neither did Rowdy Gaines. Housszu had been just too much for Dirado in the 200 and 400 meter individualmedleys earlier in the week in which also Dirado won medals but not Golds.

There may not be anything more exhilarating in sports than not expecting to win, giving your maximum effort, and shocking yourself and the world by coming in first.

Note: Lezak-ing and Lezak-ed have become verbs in swimming circles. Lezak is the last name of Jason Lezak, who in the 2008 Olympics chased down Alain Bernard of France in the 4 by 100 meter freestyle relay to give the Americans the upset victory despite being two body lengths behind half way through the race. Lezak’s comeback ranks as, arguably, the most stunning and memorable in the history of Olympic swimming.

After taking Gold in the 100 meter breaststroke, the long-haired and relatively short guy – rare among swimmers — was pumped up like no other American swimmer who won a medal. It was impossible not to notice that this guy was more excited to win a third place Bronze Medal than the vast majority of Olympic athletes.

“I’m so happy,” he told NBC’s Tafoya. “I’ve been thinking about this since I was a little kid. You never know it can happen until it happens. I have a lot of people to thank.”

So joyous. So real. So pumped. So grateful.

In a moment about his triumph, we will never forget his class and utter joy.

Entering this race, it was made clear the Americans were going to be mightily tested to re-take this Gold Medal it prides itself so much on winning in this particular race. Russia, Australia and France had, arguably, a better chance. There is something about this race that gets everybody involved in Olympic swimming pumped up. Caleb Dressel – what a talent! – got the team rolling with a great first split.

Then the moment – one of the most dazzling of this year’s Olympic swimming – unfolded deep underwater. Michael Phelps finished his first lap with the race close and then did a turn and underwater streamline that will be talked about for many years. No one can do a streamline as fast, as far, and as physically and psychologically intimidating to opponents as the Greatest Swimmer of All Time.

Emerging from the water substantially ahead of the second place team, Phelps made it clear who was going to win the race. He ended it right there.

A rarity he is and always will be.

Like Maya Dirado, Simone Manuel “Lezak-ed” her opponents in the 100 meter freestyle. At the end, like Lezak, after not leading the race she got her fingers on the wall before everybody else. She became the first African American to win an individual Gold Medal in Olympic Swimming. What made this even more momentous was how humble she was in post-race interviews. It also gave optimism and hope that more minorities will participate in the sport and hopefully win more Gold Medals.

Standing on the Gold Medal stand, we saw several swimmers with tear drops streaming from their eyes down their cheeks. But nothing compared with the uncontrollable crying that Ryan Held let out on the Gold medal stand. Contributing a key split for the men’s 4 by 100 meter freestyle relay team that won this all-important Olympic race, he was overwhelmed by the moment. He bowed his head and his facial expression was one of so much joy and emotional intensity that we may never see anything like it ever again on a Gold Medal stand.

We will never forget you, Ryan.

This article is courtesy of Charles Hartley.

Phelps was 2nd on the relay, Held was 3rd. And you’re overusing the Lezak references. Two people in the 2back final outsplit DiRado by 2 seconds on the final 50, and Oleksiak actually had a stronger finish than Manuel. Great finishes, all around. But not Lezak finishes.

Lezaking, in terms of Maya’s unexpectedly catching and passing Katinka at the wall, seems fitting – to me, anyway. I didn’t get the sense that he was intending to convey that Maya outsplit the entire field. I’m probably with you on any reference to Manuel Lezaking anyone – other than being a BIT of a surprise.

That’s fair. But lezaks finish, down by an equal margin in a shorter race, as an older athlete, racing the world record holder, with the over arching significance of Phelps run for 8, and delivering the fastest performance ever by a huge margin, as someone who was never really that close to a wr individually, makes it the greatest finish in the history of the sport. I don’t think there’s really an argument for any other being more stunning or impressive. Dirados finish, while amazing, was not all of that. I don’t think lezaks finish should really ever be compared to anything, really. It stands alone.

I didn’t say that Maya’s performance surpassed Lezak’s performance, nor that I found it to be “more stunning or impressive” than Lezak’s – and I didn’t read the article to conclude that, either. However, from the standpoint of being tremendously surprising and unexpected, I stand by my opinion that Maya’s was “Lezak-ish.” Because we live in a great country, you are free to disagree.

Completely agree on the Lezak thing. Can we at least save it for relay performances?

I rounded. Sue me

Actually I went back and looked and you were right, I was looking at hosszus split. Still a full second over dirado though, a pretty large margin for a 50. Thanks for hawking that out for me, I owe ya one.

Most underrated moment: Haas dropping a 1:44.1 split, granting the US the gold in the 4×200 and no one even mentioning his name. Who is that goofy red head next to Phelps there anyway?

Or Ryan Murphy breaking WR in 100m Back during 400 Medley Relay. How many have tried, came close to it but never quite get to even under 52s! For Ryan to swim so commandingly and broke this WR after wining two individual golds, that is spectacular!

Ryan’s 3 golds is something special – among all other incredible swims we have seen and enjoyed . He is absolutely a beast and such a cool guy . He deserves to be at least in the list with Haas and Held