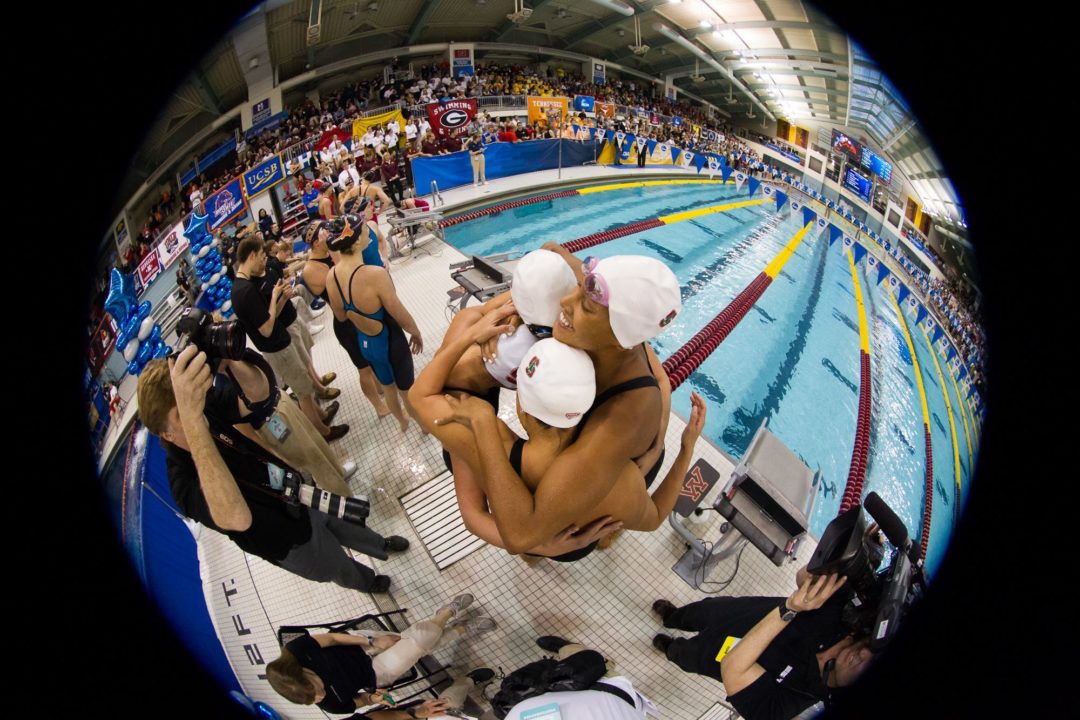 Stanford broke an American relay record, but also missed another by .03 seconds while leaving almost a full second on the blocks through safe exchanges. Are the extra tenths worth the risk of DQ? Current photo via Tim Binning/TheSwimPictures.com

While the men’s NCAA Championships were characterized by a flood of false-start relay disqualifications (something we’ll be discussing more in the near future), the women’s NCAA meet had an equally-interesting relay trend that went the opposite direction.

Despite the intense atmosphere and relays coming down to tenths of a second, there were a huge (perhaps “maddening” is an even better word) number of relay exchanges that were, well, slow.

Most of the discussion surrounding this phenomenon was sparked by anecdotal evidence. On night 1, Stanford swept the relays, breaking the American record in the 400 medley and coming within .03 of the mark in the 200 free relay. But the six exchanges between those two relays were as follows: .33, .30, .31, .46, .35, and .11.

Consider that a typical range suggested by coaches as “ideal” is between .10 and .25. Though there’s some variation coach-to-coach, the target start usually falls somewhere within that spread – fast enough to maximize speed but safe enough to minimize the risk of a false start.

Of the 6 relay starts on those two NCAA Championship relays, only 1 fell into the recommended categoy, and a couple weren’t even close. For a relay team that missed an American record by just three one-hundredths (the 200 free), leaving a combined .94 on the blocks seems pretty costly.

But anecdotal evidence often doesn’t tell the true story. In order to get a fuller glimpse into the relative speed of relay starts, we aggregated some numbers. Since there’s added incentive to be safe at prelims (especially for the top-level teams), we took the relay exchanges from finals for the top 8 relays in all five relay events and averaged, combined and sorted them out in various ways to get to the bottom of the issue: were relay exchanges at the women’s NCAA Championships really that slow (relatively speaking, of course)?

The short answer is yes. The average relay start across the championship heats of all 5 relays was a modest .30. Not outrageous, but remember that the A final of the NCAA Championships is where one might expect swimmers to push their exchanges the most. It’s the absolute last swim of the year in the event, and in one of the fastest and deepest meets in all of swimming, placings are determined by the narrowest of margins. But even in that environment, the average start was a solid .05 slower than the slowest start in the “ideal” range.

Here’s a quick table of the average relay reactions for each of the 5 relays. Note that even in the 200-yard relays, the average exchange was never within that .1-.25 window:

Note: We should discuss a couple sources of error, the chief one being equipment malfunction. In reviewing the numbers, we threw out two relay exchanges that were obvious equipement errors: Virginia’s 800 free relay was listed at a “-0.73” for one exchange but was not DQ’d, and USC’s 400 free relay featured a “-0.70” that also didn’t axe their relay. It seems unlikely that officials would miss a false start that blatant, so we threw those two numbers out. Removing 2 out of 120 exchanges shouldn’t throw off the numbers too drastically. It’s entirely possible there were errors on other exchanges, but with no way of knowing for sure, we’re forced to take the results at face value.

Those numbers aren’t pretty, but they’re not exactly eye-poppingly bad. But looking at the exchanges another way gives a pretty good sense of how safe the vast majority of relay exchanges were.

The bars show that a vast majority of relay exchanges in the championship finals fell into that “Slow” or safe category. In fact, with all relays combined, 71% of the exchanges at the meet were .25 or slower, with just over 25% in the “ideal” range. On top of that, just 2.5% of exchanges fell in that “risky” zone below .1.

So now that we’ve established a clear trend, what do these numbers mean, especially in contrast with the DQ-happy men’s meet? Is this a difference in equipment reliability between Minneapolis, Minnesota and Austin, Texas? Or is this just evidence of the old “why-young-men-pay-more-for-car-insurance” rationale – that college-age men naturally take more risks than their female counterparts?

One certainly has to wonder if this is somewhat driven by coaching. It’s quite possible that college coaches, noting the devastating points loss a relay DQ can cause, are encouraging swimmers to play things a bit safer. Anybody following the meet saw that first-hand when Cal’s 200 medley relay jumped to open day 2 prelims, a knockout blow the Golden Bears never fully recovered from.

Relay starts are essentially a trade-off: you’re balancing the risk of a DQ with the potential to pick up a few tenths of a second. It would seem there is more risk than reward in that equation, though maybe the members of that almost-American record Stanford 200 free relay would disagree in hindsight.

Another explanation could be the spotlight. There aren’t many meets with the intensity of the NCAA Championships. Swimming in front of a standing-room only crowd (not to mention an intimidating crowd of on-deck officials ringing the pool) can easily cause a swimmer to play things safe with something as risky as an exchange.

Then, of course, there was the hoopla over the kick-plates on the NCAA starting blocks. The NCAA announced it wouldn’t allow swimmers to remove the wedges for relays, then changed its mind to allow removal, but only before the race, meaning if the leadoff swimmer used the wedge, it would remain on the block for the rest of the team’s exchanges. Could the presence of those kick-plates thrown off swimmers’ exchanges this significantly?

It doesn’t seem like the kick-plates would make that significant a difference. Despite some pre-meet concern, it seemed most swimmers found plenty of room on the blocks with the wedge pushed all the way to the back, and there weren’t any swimmer or coach comments suggesting it had any effect on relays.

The biggest question seems to be if these safer relay exchanges were the result of a conscious, strategic decision or an unconscious reaction to the environment. Either way, there’s no doubt college coaches have already noticed the trend in their own analyses of the meet, and so it’s worth keeping an eye on how coaches decide to approach the relay exchange risk/reward dichotomy moving forward.

I think we had a quote from one men’s coach: We have to go fast (on relays too) in the morning, but at night we have to be careful not to lose the guaranteed large number of points.

This would indicate at least at the men’s meet, where all teams may have been closer? that prelims is where you would see the fast starts, and slower ones at night.

Ellese Zalewski was the single worst offender with relay starts of .51, .56, .59, .62, and .69. When you are more than double what I would consider a safe start it is pretty atrocious.

Wow, a fast flat start would be .6 something…