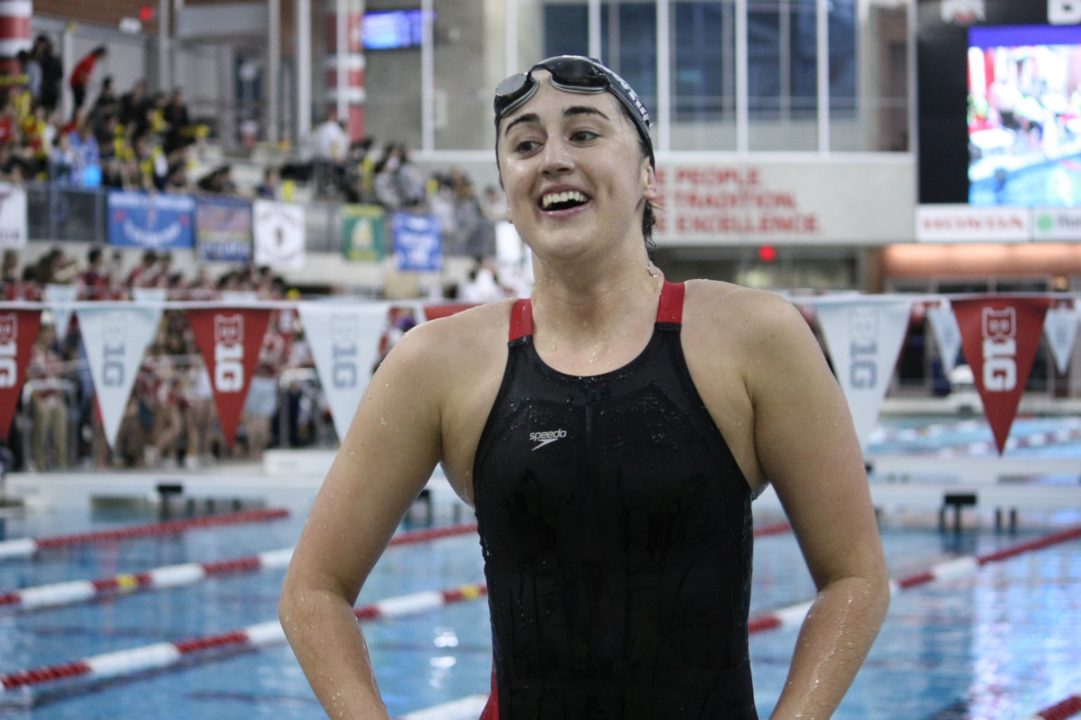 Like it or not, we rely on emotions and nerves to swim fast and Ashley had none of it when the long whistle blew. Current photo via Sean Dorsey

If you haven’t heard much about Ashley Neidigh in a while, there’s a good reason for that.  The distance star who rose quickly through the ranks in 2017 and 2018 has been working on an important project- herself.

Considered a contender for the second spot in the 800 and 1500 at 2018 U.S. Nationals behind Katie Ledecky, it was surprising to anyone who followed her rise when she came in 15th and 10th, swimming well off her best times.  The cause was far more complicated than overtraining versus undertraining, quality versus quantity.  Ashley suffers from depression and although she thought it was under control in the months leading up to Nationals, it was simply buried; in hindsight, it was bubbling up until it boiled over at the worst possible time. After Nationals she was no longer sure of her place in the community that defined her for so long. This article looks at Ashley’s ongoing battle with depression, her uncertainty over the future of her swimming, and her attempts to piece together how she fits into the puzzle that is our beautiful, merciless sport.

If you have never struggled with mental health of any kind, consider yourself lucky and part of a much smaller majority than you might think (roughly 20% experience mental health issues).  At times depression can feel like you are being ripped apart from the inside out.  Your body playing a tug-of-war with itself- half of you wants to be content and the other half wants to retreat to a dark room for completely unknown reasons.  Sometimes the only comfort you find is in letting your mind become a blank slate with no ambition for filling it.  At times you feel nothing, literally nothing.  The big race you’re standing behind the blocks waiting for, that you’ve worked relentlessly for, inspires no emotion of any kind.  Not nervousness.  Not sadness.  Certainly not happiness.  Just complete and utter indifference.

Sadly, we’re conditioned to toughen up- people generally but especially athletes.  As Ashley said, “I used to think being “tough” was choking back the thoughts and feelings and grinding through the day-to-day of practice, school, life.  I look back at the years I spent internalizing this and desperately wish I had been talking to someone.  I remember Allison Schmitt (who has fought her own battles with depression) asking me how I was doing with it and replying ‘Oh!  I’m doing great, it’s all behind me.’  That was all a lie, but I thought if I said it enough and tried to believe it enough, it might actually become truth.”

Ashley first realized something was off “around my junior year of high school.  That’s when it really started to impact me, but not always negatively.  I sometimes used it as motivation to swim faster because I didn’t want anyone to think anything was wrong.  During my junior and senior years at Auburn, though, I felt like it was somewhat under control, because that was the first time I started meeting with a psychologist on a routine basis.  And that lead me to start seeing some big results in swimming.  I think when I first moved to Indiana, I got distracted by the newness of everything and didn’t realize the importance of keeping up with going to my appointments and keeping an eye on this.  Plus, in the fall of 2017 I was extremely happy- I was training great, racing well, and thought all of this was behind me.”

And then gradually in the weeks leading up to the 2018 U.S. Nationals, Ashley found herself in a hole.  Her body was in the best shape of its life and ready to race, but her mind was gone.  On race day she didn’t even want to get out of bed.  Like it or not, we rely on emotions and nerves to swim fast and Ashley had none of it when the long whistle blew.

“Are you still swimming?” is Ashley’s least favorite question and one she gets asked a lot.  She’s still a (graduate) student and she’s still in the prime of her swimming life, so why not keep going?  “I still love swimming and I swim a lot on my own.  In smaller doses it has a healing power right now, but I’m not sure yet that going back to the grind is good for my mental health.  I’ve been swimming with the club team at IU hoping to use it as either validation that stepping away was the right choice or as a way back to professional swimming.  At the National College Club Swimming Championships a couple of weeks ago Ashley had a blast, enjoying the camaraderie of a college team again and swimming off-events just for the fun of it.  It all reminded her of why she fell in love with the sport in the first place.

“Part of my recovery today includes routinely going to therapy, but also being extremely open with the people in my life.  Some of the huge strides I’ve made in the last couple of months have been largely due to the fact that I always wanted to be able to report back to my family, my friends, and the coaching staff here at IU that I was taking care of myself, going to my appointments, and making progress.  Still being welcomed and considered part of the IU swimming family has had a huge, positive impact on me.”

The Olympic dreams still stir in Ashley’s mind, but regardless of whether she makes a comeback or not, one of her major goals will be to show that “you can live with depression and not let it define you and you can win the battles with depression as they come.  I know I will never be ‘out of the woods’ or be rid of this, and that’s okay.  Depression is just this thing I have, it’s not something I consider a part of my identity and I don’t feel bad for myself anymore.  I am still bubbly, energetic, caring, and view myself as a positive person.  I accept that this condition is not my fault and sometimes how I feel may not be under my control, but how I move forward with it and what I do with my life is entirely my responsibility and under my control.  I don’t’ really know what all of this means moving forward.  I don’t have a timeline or a plan, but I do know who I am, I do know what I can do, and I know I have the strength, love, and support to move forward.  I hope my story helps others seek help.  It just takes a conversation to get the ball rolling towards recovery.”

So proud of you Ashley! Keep giving and sharing, it really does help others!!

Dear Ashley
Do not give up, depression is something that you can conquer, specially when you realize the fact that you have it, that is the main step. You will learn to live with it, and have a happy life, but if you need medicine, take it, see your doctor.If you were diabetic ? Would you stop the insulin? Of course not , and the same with any sickness.Do not hide it, talk ,ask, share it with friends and family, ask for help, because doing that not only you are helping yourself but others, and will never hurt you if you turn to God and ask Him to help you, to give you the strength you need to keep… Read more »

Mental health is what ultimately ended my swimming career. I love that the swimming community is opening up and supporting everyone who shares their story.

I admire you courage Ashley! Thank you for your willingness to share this part of your life’s journey. Know, those you positively influence and encourage will be great.

You are amazing Ashley!!!! Thank you for sharing your story, it is inspiring. I am so proud to call you a friend!

Love this article! As someone who’s struggled with depression all of my adult life, I know first hand how painful it is to have the joy sucked out of everything you love. So happy that these conversations are coming to the forefront now.

Thank you Ashley for your courage sharing your story. I think it is important that USA swimming addresses mental health issues with on going training for all of their coaches.

Proud of you Ashley!!! Thank you for opening up and sharing your story 💓