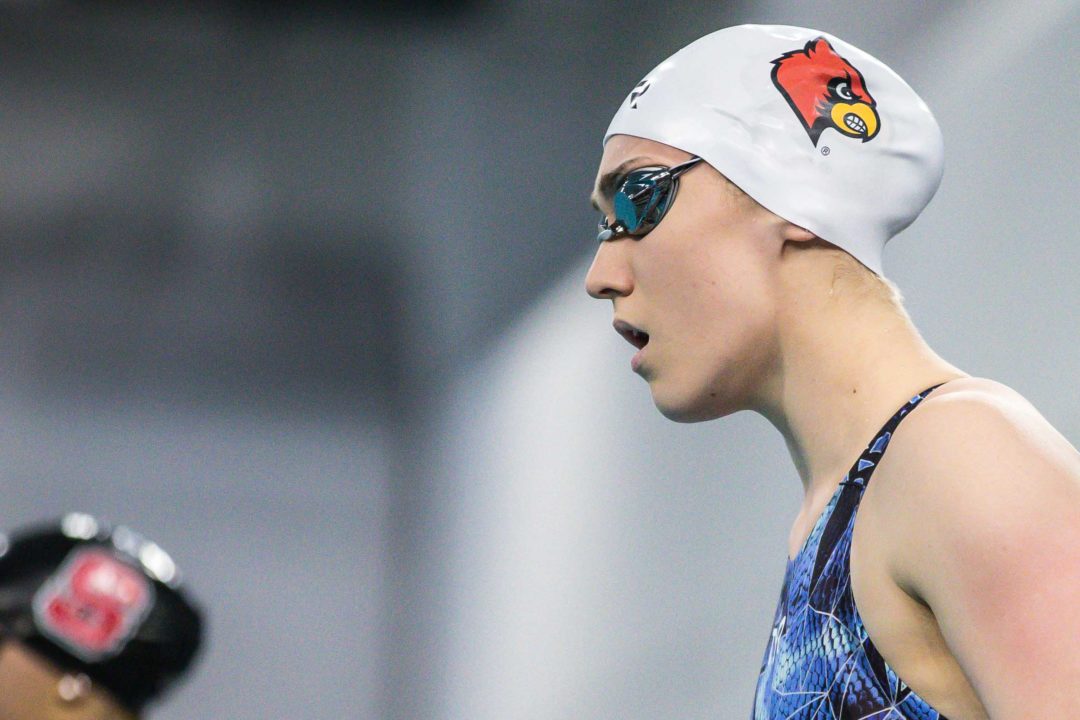 One of the most dominant wins of the day came from Louisville fly star Grace Oglesby, who swam a 1:55.09 to win the 200 fly. Stock photo via Jack Spitser/Spitser Photography

Auburn went into the 2nd and final day of the SMU Classic holding a 4 point lead over Louisville in the team battle. Louisville ended up narrowly edging out Auburn on day 2, winning the team title by 2 points. Northwestern again kept it close with the top two teams through day 2, finishing the meet in 3rd, just 18 points out of 1st (16 out of 2nd).

Northwestern’s Calypso Sheridan built upon her speedy day 1 swims with wins in the 200 back, 200 IM, and 200 medley relay, and going on to win Swimmer of the Meet for her efforts.

SMU| Calypso Sheridan HAD A WEEKEND and earned meet MVP 👏👏👏

Sheridan roared to a new personal best in the 200 back, touching the wall in 1:52.86. She was behind Auburn’s Sonnele Oeztuerk (1:53.25) at the 150 mark, but turned it on for the last 50, splitting 27.97 to get her hand on the wall first. Sheridan’s time also broke her own Northwestern school record. Additionally, her time is now the fastest in the NCAA so far this season (Oeztuerk is currently 2nd).

Sheridan also won the 200 IM later in the session, finishing in 1:56.57. She split 25.11/29.36/33.95/28.15 respectively during the race, all of which were the fastest splits in the field for each stroke. Her time currently stands as the 2nd fastest in the NCAA this season, behind only UVA freshman Kate Douglass‘ incredible 1:55.15 from last weekend.

Northwestern started out the day with a win in the 200 medley relay, thanks to an excellent front half. Sheridan led off the relay spectacularly, spliting a 23.98. Hannah Brunzell then clocked a 27.49 on the breast leg to put the Wildcats at 51.47 at the 100 mark. Miriam Guevara then held things steady for Northwestern on the fly leg, splitting 23.77. Maddie Smith anchored the Wildcats in 22.69, managing to hold off Louisville’s Lainey Visscher (22.09). Other standout splits included Auburn’s Claire Fisch anchoring in 21.63 and Grace Oglesby’s (Louisville) 23.15 fly split.

The Wildcats also got an event win out of freshman breaststroker Hannah Brunzell, who took the 200 breast in 2:10.22. Brunzell got out to a very quick start, turning at the 100 mark in 1:02.27. Her time currently stands as the 2nd fastest performance in the NCAA this season, behind USC’s Isabelle Odgers (2:09.46).

Another dominant win came when Auburn’s Emily Hetzer blasted a 4:39.71 to win the 500 free by over 9 seconds. The time was nearly a personal best for Hetzer, who has been as fast as 4:39.18, which she swam at the Goergia Tech Fall Inviational last year. Her time was also 2nd in the NCAA this season, coming in behind UVA’s Paige Madden (4:38.67). Auburn also picked up a win in the 100 free, when Claire Fisch uncorked a 48.41 to clear the field by well over a second. It was Auburn’s Julie Meynan, however, that posted the fastest time in the field, winning the ‘B’ final with a 48.20. At the SMU classic, teams are allowed 2 swimmers per event, with coaches choosing one to swim in the ‘A’ final, and one for the ‘B’. Meynan’s 48.20 is now the fastest time in the NCAA this year, with Fisch’s time coming in 3rd.

Iowa picked up a win in the 3 meter diving, with Samantha Tamborski racking up 302.00 points. She was the only diver in the field to break 300 points today.

Without suits all swimmers and divers woulda been DQed