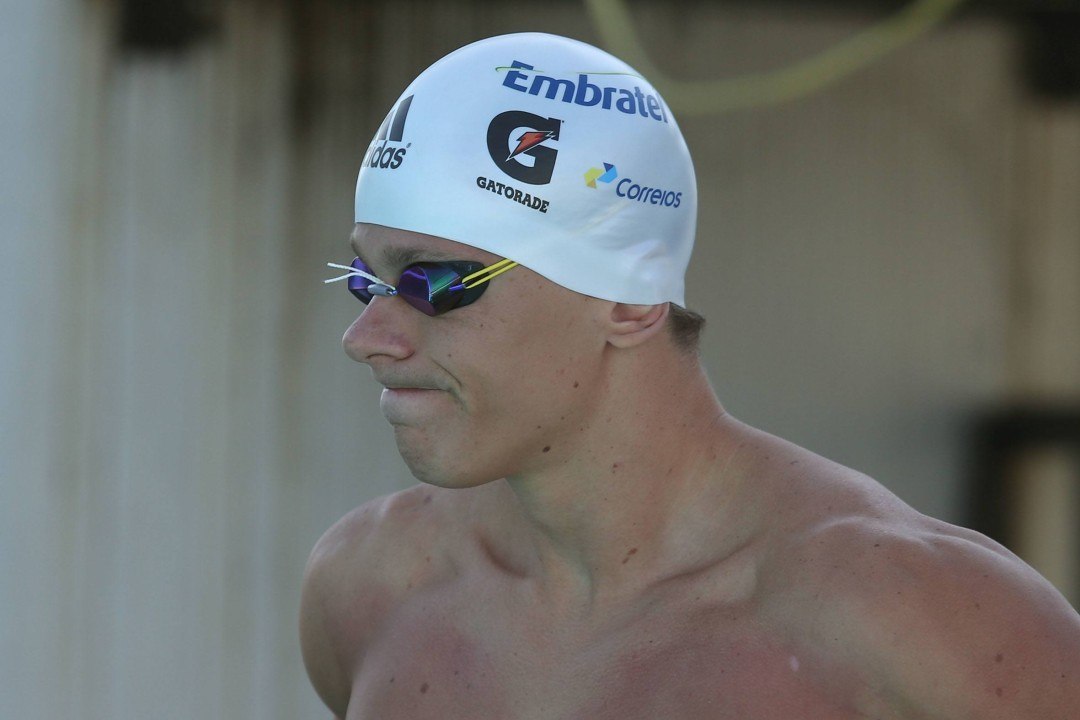 Cesar Cielo is the only member of the Brazilian World Championships team who won't also race at the Pan Am Games. Archive photo via Satiro Sodre/SS Press

The Brazilian Aquatics Federation (CBDA) has announced its roster for the 2015 Pan American Games, and the big news is that they will send most of their top swimmers for double duty upon the Pan Am Games in Toronto, Canada and the World Championships in Kazan, Russia.

This year, however, the conflict is direct and significant. So significant, in fact, that FINA moved their championship back a week to avoid an actual overlap with the two meets. Now, swimmers will have around a week to travel the 5,000 miles from Toronto to Kazan, with any stop back home in Brazil unlikely.

Among the swimmers who will focus specifically on this meet is veteran Kaio Almeida. The former World Record holder in the 50 and 200 fly in short course meters failed to make the time for Worlds, but will seek to add to his 8-medal strong Pan Ams resume.

Two swimmers, Gabrielle Roncatto and Brandonn Almeida, will also swim both the Pan Am Games and the Junior World Championships that run from August 25th-30th in Singapore.

Slightly off topic, but this just reminded me that Feigen, McLean, and Weiss are swimming individual evened at PanAms, but relays at Worlds. Normally, this wouldn’t be a huge deal, as the US would have the depth to deal with it. But this year, they probably need Feigen and McLean, and possibly Weiss, to peak at Worlds to help the relays, especially since they’ll be lacking Phelps. It’ll be interesting to see how they manage their taper.

I think Cielo is the only man in the world who could potentially take out Manadou. Im glad he isn’t swimming pan ams. One of those two titans will hit 21.2 this year.

WADA may take them down too. Seems to be happening a lot lately

Almeida is no longer the WR holder in the SCM 200 fly. Unless it’s just taken FINA a long time to ratify Le Clos’ record.