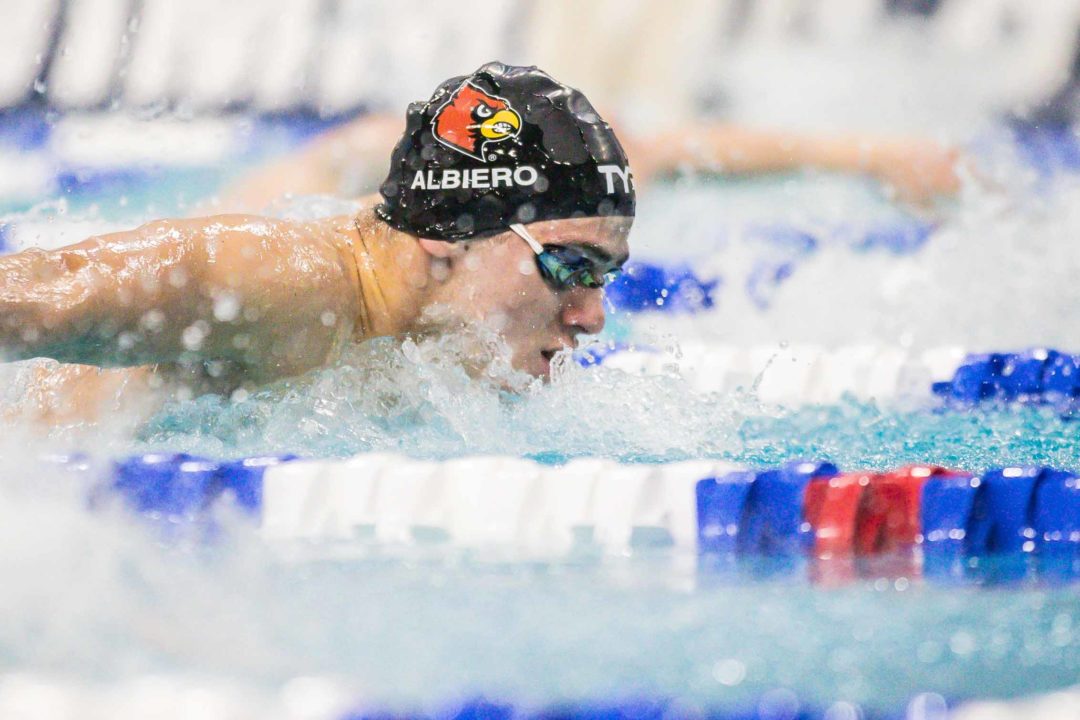 Louisville's Nicolas Albiero is among an elite group of 5th year swimmers in the 200 butterfly who will race in Atlanta later this week. Current photo via Jack Spitser/Spitser Photography

The men’s 200 butterfly is one of the prime races for 5th year swimmers at this year’s NCAA Championships. Though only four 5th years are actually listed on the psych sheet, each one of them has a high likelihood of making the championship final. In fact, 5th year athletes occupy the 1st, 3rd, 9th, and 26th seeds in the men’s 200 fly

Louisville 5th year Nicolas Albiero is the reigning NCAA Champion in the 200 butterfly and now the 2nd-fastest performer all-time after registering a 1:37.92 at the 2022 ACC Championships. Last year, Albiero barely held off Cal’s Trenton Julian, winning the race 1:38.64 to 1:38.85. This season, Albiero leads the NCAA by a full 1.08 seconds. The first time a swimmer ever broke 1:39 in the 200 butterfly occurred at the 2016 NCAA Championships when Texas fly duo Joe Schooling and Jack Conger blasted times of 1:37.97 and 1:38.06. If Albiero matches his best time, he will crack Schooling’s 2016 pool record. If he is able to drop another 0.58 he can crack Conger’s NCAA, U.S. Open, and American Records from 2017.

Speaking of Cal’s Trenton Julian, not only is he the 2021 runner-up in this event, he’s also the 4th-fastest performer all-time behind Conger, Albiero, and Schooling. Julian is ranked 3rd in the NCAA this season with a 1:39.66. Julian, who is a 5th year senior like Albiero, was 1:39.95 at the Pac-12 Championships, nearly being chased down by Arizona state junior Alex Colson who posted a new lifetime best of 1:40.28. Colson has dropped over two seconds this season in the 200 fly, whereas Julian is a little over a second off of where he was at this point in the season last year. Colson, however, does not have the NCAA experience that Julian does, which between the two gives Julian the edge.

The University of Georgia brings a powerhouse duo to the 200 fly with Luca Urlando and Matt Sates. Urlando and Sates embedded themselves in the top-25 all-time rankings with their performances at the SEC Championships, ranking 9th and 17th all-time in the yards version of the race. Sates could have a slightly more grueling schedule than Urlando, though both should be expected to earn a trip to the championship final in the 200 fly.

Speaking of tough event lineups, Indiana’s Brendan Burns successfully took on the 200 back/200 fly double at the Big Ten Championships, winning gold in each race. At NCAAs, Burns has opted for a slightly less grueling double with the 100 fly/100 back on Friday, allowing him to focus solely on the 200 fly on Saturday, as well as probably the 4 x 100 freestyle relay. Burns’ ability to pull off a win and a sub-1:40 swim in the 200 fly after winning the 200 backstroke at Big Tens makes him one of the most intriguing athletes to watch in this event.

Circling back to our 5th year seniors, Georgia Tech’s Christian Ferraro will have home pool advantage and the luxury of not having to travel across time zones. Ferraro put up a 1:40.33 at the mid-season Georgia Tech Fall Invite in November, though was not particularly close to that at ACCs, swimming a 1:42.37 in prelims. Ferraro DFS’d this race in 2021 but placed 12th in 2019, and given that he’s one of the 10 swimmers with an NCAA ‘A’ cut who is entered in the race this season, his shot at the top-8 seems as good as anyone else’s.

Virginia Tech senior Antani Ivanov placed 3rd at the 2021 NCAA Championship and is one of just 6 men entered in the event to have already been under 1:40 in the race this season. Ivanov and teammate Youssef Ramadan will be a force in the 100 fly, though Ivanov is VT’s only entry in the 200 fly. Ivanov’s schedule flows nicely in that he only has 1 individual event per day, which could help to lessen the toll the meet takes on him and boost his performance come Saturday and the 200 fly–the final individual event.

NC State freshman Aiden Hayes broke the 17-18 NAG Record in the 200 yard butterfly with a 1:40.39 at the ACC Championship, which is both an NCAA ‘A’ cut and good enough for the 10th seed in the race. NAGs may not mean much in the NCAA, but when you consider the other names Hayes had to push past on that list, including Georgia’s Urlando, it’s obvious Hayes belongs in this level of competition. If he can cut off another 0.40 and slip under 1:40 he’s probably into the championship final. NC State’s last great 200 butterflyer was Andreas Vazaios, the 2018 and 2019 NCAA Champion. Hayes has big shoes to fill, but looks to be off to a good start.

Mizzou’s Danny Kovac is again on the bubble of a potential berth in the ‘A’ final of the 200 fly. At NCAAs in 2021, Kovac placed 10th in prelims, a place that he would hold onto in finals. Kovac also had a big summer, earning a spot in the finals of the 100 butterfly at U.S. Olympic Trials, qualifying 4th out of the semifinals to ultimately finish 8th. This season, Kovac has shaved 0.36 from his 200 fly, something he’ll probably need to do again to make the ‘A’ final at NCAAs this year.

Our final 5th year swimmer is Corey Gambardella from Indiana. Gambardella was impressive last summer, placing 6th in the 200 fly at U.S. Olympic Trials with a 1:56.79. The only current NCAA swimmers who beat him in the long course version of the race were Urlando, Albiero, and Julian. While long course and short course comparisons are far from perfect, it does serve as an indication that Gambardella could be ready to make a championship final, despite his low seed (26th).

Dark Horse: Federico Burdisso, Northwestern. Burdisso may be the only swimmer in the field with an Olympic medal, having taken bronze in the 200 butterfly at the Tokyo 2020 Olympic Games, but the Italian national has yet to fully acclimate to yards competition. With a lifetime and season best of 1:41.82, Burdisso enters the meet seeded 24th. However, if he can bring his yards time in line with his converted long course time–his 1:54.45 converts to a 1:40.58–then he could make an appearance in the ‘A’ final.

Teej will pick up his well deserved title in this one. 🐻

In Luca we trust

Sheesh. Remember when breaking 1:40 was a thing nobody did?

Sates won’t be behind Burns or Julian.