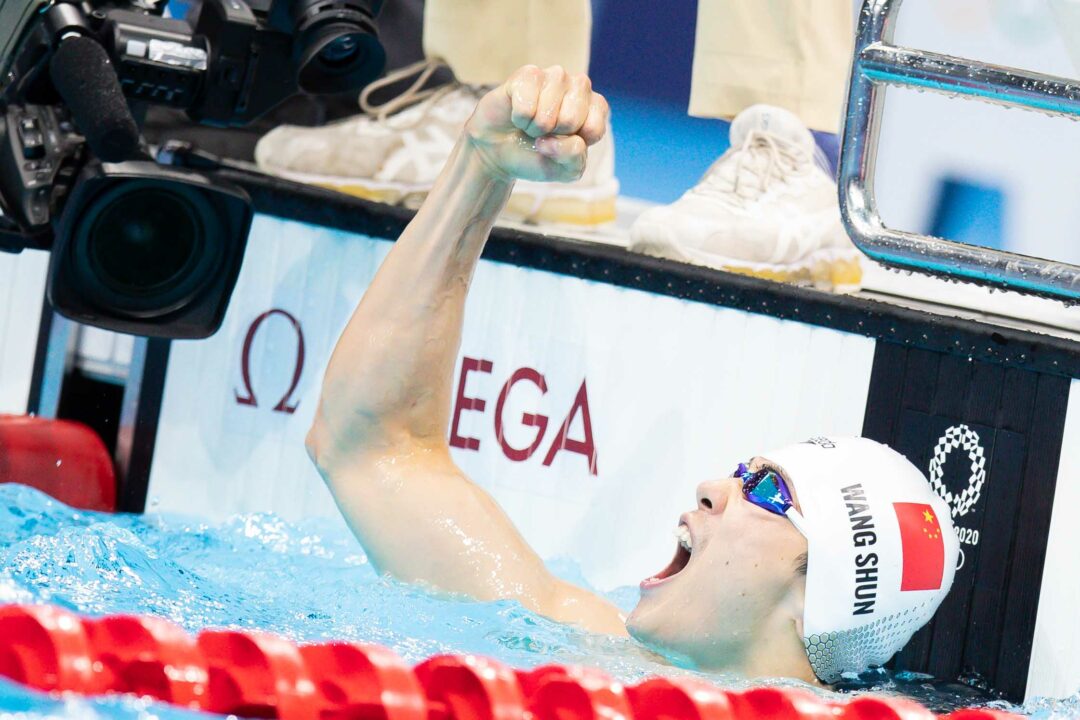 Wang Shun raced his way to Olympic gold this year with a 1:55.00 Asian record in the 200 IM, becoming the 3rd fastest man in history. Archive photo via Jack Spitser/Spitser Photography

Wang Shun came into 2021 as one of China’s leading men over the past few years, having won Olympic bronze in the 200 IM in 2016, along with a bronze in that same event in 2017. He has also picked up a number of medals in a variety of events over the past decade at the long course World Championships, short course World Championships, the Asian Games, and the Military World Games.

Shun’s first big swim of the year was at Chinese Olympic Trials in May when he soared to victory in the men’s 200 IM. He swam a 1:56.78 to win the event by nearly three seconds, getting under the FINA A standard of 1:59.67. That swam was just over his 2017 national record of 1:56.16 and was enough to get him a spot at the Tokyo Olympic Games.

In the first round of racing at the Tokyo Games, Shun got down to a 1:57.42, which was the 7th fastest in the field. In the second round, however, Shun accelerated to a 1:56.22 to get within 0.06 seconds of his PB and Chinese record.

With a loaded field in his company, Shun ultimately got the job done in the final and blasted a 1:55.00 Asian record to take Olympic gold. He finished just 0.28 seconds ahead of silver medalist Duncan Scott and collected his first-ever Olympic gold medal. The swim took out Kosuke Hagino’s former Asian record of 1:55.07 from back in 2016 and made Shun the 3rd fastest man in history behind Ryan Lochte (1:54.00) and Michael Phelps (1:54.16).

Wang Shun walked away from the Olympics as the only Asian man to top an individual podium in the pool. Shun also raced the 400 IM at the Games and swam a 4:10.63 in the prelims to finish 10th overall.

While many of the world’s greatest swimmers took a break from long course racing, Shun took to the pool at the 2021 China National Games in September 2021. Just a few weeks after winning his Olympic gold medal Shun swam a 1:56.33 to win gold (a swim that would have been the 5th fastest time in the Olympic final).

Want Shun won this year but Hwang Sunwoo looks like the top star of the future.

I’m a bit biased but I think seto deserves it more than wang. Yes wang won the gold at the 200 IM at the games, but that’s about it, placed lower than seto in the 400 and seto dominated the ISL the WC circuits in his respective events + 200 breast. I’m not by any means invalidating wang’s accomplishments but compared to seto who bounced back from the games and was dominating the world up until worlds, doesn’t really compare IMO

I know that Seto is everyone’s boy, but he BOMBED at the Olympics. Like he was terrible. IMO, while the Olympics aren’t everything, if someone’s going to recover to win this award after such a terrible Olympics, it’s going to require a minimum of a World Record.

I don’t really know about that IMO. Wang won the gold which is great, but only in one event. I know long course is seen as more important, but I just feel like even if it’s short course SETI’s performances is much more impressive than wang’s

No way any SCM performances can beat an individual olympic gold medal.

If Seto won at least one minor medal at the Olympics, then there was still room to argue. However he didn’t even make the final in his best event. All the short course performances can’t make up for that.

Lmao didn’t think this would get so much hate lol, but all of your opinions are valid.

He is very humble and has a good personality.
It’s very good to say that he became an Olympic champion and his efforts were rewarded.

Shun’s first big swim of the year was at Chinese Olympic Trials in May when he soared to victory in the men’s 200 IM. He swam a 1:56.78 to win the event by nearly two seconds, getting under the FINA A standard of 1:59.67.

Honestly feel like Hwang and Seto were more impressive across the year.. Seto dominated ISL and WC in multiple events and then got 2 golds at SC worlds…

Yeah, Wang got Olympic gold with a really good time, but basically that was it for the year…

Ask Seto would he rather have one Olympic gold or some decent short course results in meets where a good chunk of the world’s best swimmers didn’t even show.

Not to mention 1:55.00 is the fastest anyone not called Phelps or Lochte has ever been.

the 1:55 is the part that really seals the deal for me, if it were a “slow” gold medal then I could see it being argued the other way (but I would still give it to Wang) but the fastest time in history behind the two IM greats is just too much