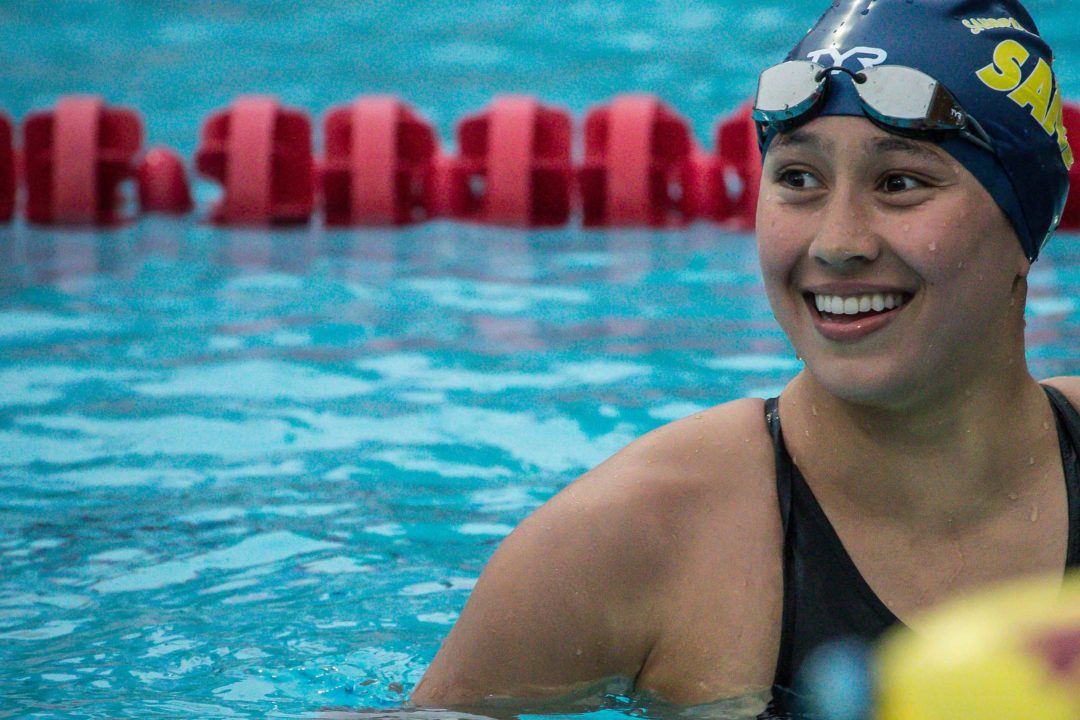 In tonight's race, Sullivan led the field in 8:29.75, just under 4 seconds shy of her lifetime best from the FINA World Cup in August. Archive photo via Jack Spitser/Spitser Photography

Last month, Sullivan became the 2nd fastest performer ever in the 1650 yard free. She’s a major threat to make the Olympic team this summer in the distance races. In tonight’s race, she led the field in 8:29.75, just under 4 seconds shy of her lifetime best from the FINA World Cup in August. That was also nearly 10 seconds faster than Sullivan swam in this event at the 2019 Pro Swim in Knoxville a year ago.

Kaersten Meitz, a 2019 WUGs champion, pulled ahead of junior standout Mariah Denigan on the back half in the battle for 2nd. Meitz touched the wall in 8:31.85, just a few tenths shy of her lifetime best from last summer. Denigan wound up 3rd in 8:35.07.

Marcelo Acosta, a postgrad All-American at Louisville, and Jeremy Bagshaw, a postgrad All-American at Cal, were within hundredths of each other at the finish. Bagshaw was out slightly quicker, with Acosta half a second behind. Acosta took over a slight lead going into the final 100, but Bagshaw made one final push to get his hand on the wall first in 8:06.17 to Bagshaw’s 8:06.25.

Perhaps I’m just an aging boomer but I prefer USA swimming’s use of a single camera at the 50 yard line as opposed to FINA and ISL’s use of a half dozen different angles. Significantly easier to see a race develop.

Vote Up40-1Vote Down Reply
That guy

Agreed with the boomer. They’ve had moments in the isl where they bounce shots around after the start, breakout and even before the 15. Super annoying. Especially in something like the 50

Congrats to Erica! Only 10 more events left for her to swim 😉

How are is the 800 shaping up for trials on the women’s side? Is Leah still focusing on it? Who’s in it?

If Leah is planning to swim it, she should have the 2nd spot comfortably. If for some reason she doesn’t, it could be a very close battle between Sullivan, Schmidt, McHugh, and Twichell. Maybe a dark horse like McMahon or Weyant? Lots of women in the 8:26-8:29 range last summer