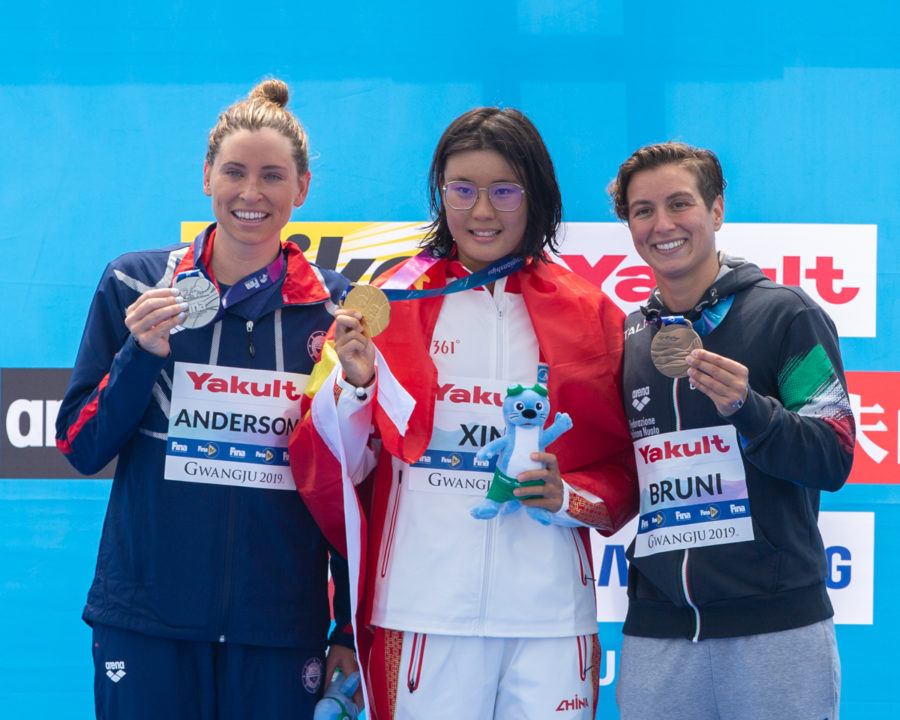 Xin Xin led 10 qualifiers, including Americans Haley Anderson and Ashley Twichell, as the first to book their tickets to Tokyo 2020. Current photo via “Rafael/Domeyko Photography”

The first qualifying spots in aquatic sports for the 2020 Olympic Games have been awarded to 10 women representing 8 countries and 5 continents with the recent nail-biting finish of the women’s 10 km open water race at the 2019 FINA World Championships in Gwangju, South Korea.

The 2019 World Championships serve as one of two Olympic Qualifiers for open water swimmers. The other event will take place in Fukuoka, Japan, though the date of the competition has not yet been determined.

This year’s final comes as a complete overhaul for the podium; in 2017, France’s Aurelie Muller won gold by more than 2 seconds over Ecuador’s Samantha Arevalo. Italy’s Arianna Bridi and Brazil’s Ana Marcela Cunha then tied for bronze. Bridi was 13th and Arevalo was 18th in this year’s race.

Sharon van Rouwendaal, the 2016 Olympic Champion from the Netherlands, will get the opportunity to defend her gold medal next year in Japan with a 10th-place finish today in Korea.

Two-time 10km World Champion Aurelie Muller of France finished 11th, which means she misses the Olympics by a tenth of a second – as her countrymate Lara Grangeon (a European Champion in the pool) finished 4th via a successful transition to open water.

Note that swimmers who have qualified via this meet have blocked out their countrymates from qualifying. Countries cannot add a 2nd qualifier via the Olympic Qualifying Race that will be held in 2020 in Fukuoka, Japan.

Countries that have completed qualifying for the Olympics in the women’s open water 10km swim:

Why can some countries not have more than one swimmer qualify for Tokyo?

OW has an elaborate criteria for their selection. Swimswam ran an article with the criteria yesterday

Once you’ve had a swimmer or 2 qualify via the top 10 at the World Championships, that country cannot qualify more athletes via the Olympic qualifying race.

So if you wanted 2 at the Olympics from your country, this was your chance- get 2 in the Top Ten TODAY.
That’s pretty clear…and cut-throat, as qualifying often is.

The last 5 athletes listed here have no quotas yet. “Continental Representation (5 athletes): (…) the next highest ranked athlete from the same continent, not yet qualified, in the ranking of the FINA Olympic Marathon Swim Qualifier 2020 event will qualify (…)” So the 5 continental places will be awarded based on the results of the 2020 Fukuoka (JPN) FINA Olympic Marathon Swim Qualifier event.

If you had time please come to https://forum.index.hu/Article/showArticle?t=9127257.

Yay for Haley and Ashley!

So is Aurelie Muller out of the Olympics?

99 percent. But it’s not so simple.
https://swimswam.com/krapivina-anna-olasz-ow-race-per-ioc-decision-russia/