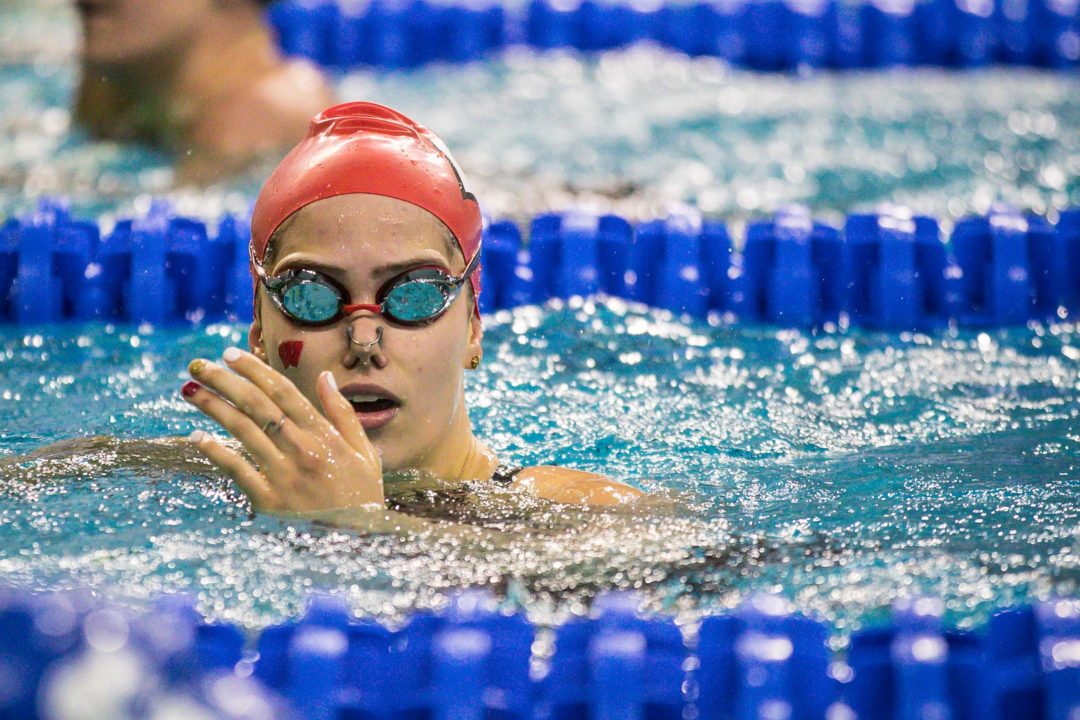 Beata Nelson's American Record was broken by age group phenom Regan Smith earlier this month by just a hundredth. She's got a chance to take that record back in finals. Current photo via Jack Spitser/Spitser Photography

Day 3 finals of the 2019 Women’s NCAA Championships in Austin, Texas will see swimmers compete for titles in 5 individual events: the 400 IM, 100 fly, 200 free, 100 breast, and 100 back. Divers will then compete in the 3-meter finals before swimmers step up to close the session with the 200 medley relay.

Read on for a preview of a few of the races and swimmers to look out for. For a full recap of this morning’s prelims, click here.

BEATA NELSON WANTS HER RECORD BACK:

In December at the Texas Invite, Wisconsin’s Beata Nelson took down the American Record with a 49.67 in the 100 back. Earlier this month, however, age group phenom Regan Smith broke that record by a hundredth in 49.66. Nelson still owns the NCAA Record, as Smith is in high school, but tonight she has a chance to take the American Record back.

Nelson has looked great at this meet so far. Last night, she pulled off the upset in the 200 IM with the 2nd fastest swim in history, missing the American Record by just a tenth. She was under American Record pace at the 50 this morning, but appeared to shut it down into the finish to save her best for tonight.

In the women’s 400 IM, defending champion Ella Eastin of Stanford will look for redemption after being upset in the 200 IM last night. Eastin is far ahead of the field in terms of best times, but teammate Brooke Forde has been on fire. Eastin (#1), Forde (#9), and Texas A&M’s Sydney Pickrem (#8) have all broken 4:00 and are all on the all-time top 10 performers list. All 3 women looked smooth in prelims, saving their best efforts for tonight.

Forde made a huge drop in the 500 free to take the title last night. If she brings that same fire to the 400 IM final, she’s got a shot to win her 2nd title in as many days. In the 200 IM, Eastin was about a second shy of her best, while Pickrem was right on her best time at SECs. Since Pickrem didn’t swim the 400 IM at SECs, it’s hard to predict what she has in the tank. If Eastin is close to her best, however, she’ll be very tough to beat.

The 400 IM isn’t the only event in which the reigning champion returns. We’ve got NCAA Record holders Lilly King (Indiana) and Louise Hansson (USC) competing tonight, as well as Louisville’ Mallory Comerford. King set the NCAA Record a month ago at Big Tens, where she became the first woman to break 56 with a 55.88. Hansson won the Pac-12 Championship title in 49.34, breaking the NCAA Record formerly held by Kelsi Dahlia.

Comerford is looking for her 3rd-straight title in the 200 free. Last season, she became just the 2nd woman ever to break 1:40, but the fastest ever is still Missy Franklin. Comerford comes into the meet with a best of 1:39.80. She’ll need to drop 7 tenths to take down Franklin’s 1:39.10.

King has won 3-straight 100 breast titles and is the heavy favorite to make it a perfect 4-for-4. Hansson will be going after a 2nd-straight title, but will have a challenge on her hands in Michigan’s Maggie MacNeil and Tennessee’s Erika Brown, who have each been sub-50 this season.