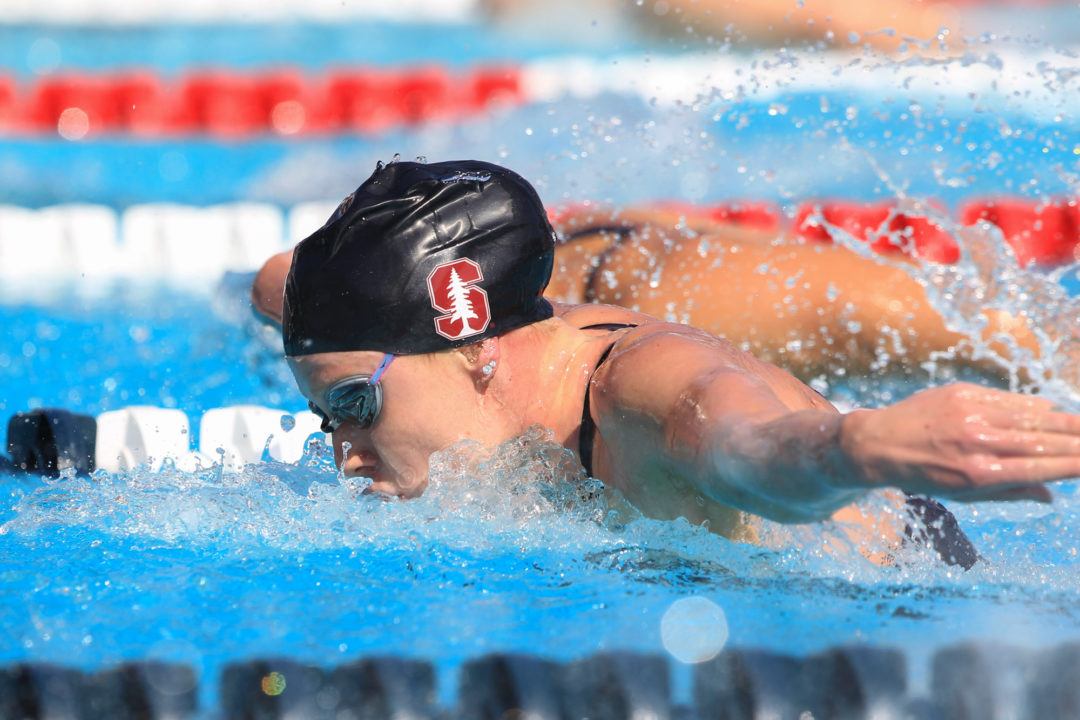 Hansson's got the raw speed, but Eastin has the upper hand on the back half. Archive photo via Tim Binning/TheSwimPictures.com

Check out all of SwimSwam’s 2019 Women’s NCAA previews here.

Stanford’s Ella Eastin is back to defend her NCAA title as the only woman in this field to have broken 1:50. Eastin, who broke the NCAA Record and American Record in this event at the 2018 Pac-12 Championships, opted out of the race at the 2019 Pac-12 meet, but will go for her record here. Fellow Cardinal Katie Drabot, who took 2nd to Eastin in 2018, also returns after putting up a best time of 1:51.42 at Pac-12s. They;ll look for another 1-2 Stanford finish, but the current Pac-12 champion is a serious threat to that.

That champion is USC’s Louise Hansson, who was on fire at the Pac-12 Championships last month as she broke the NCAA Record in the 100 fly and popped a lifetime best 1:50.68 in the 200 fly. Hansson’s certainly got the speed, but Eastin typically has the edge on the endurance side of this race, so Hansson will have to work her back half for a shot at the title. Trojan teammate Maddie Wright went her lifetime best 1:52.48 at midseason and is coming off a 6th place finish in 2018.

Cal’s Katie McLaughlin hasn’t swum her best in this race since 2017, but looks due for a drop after a strong performance at her conference meet. In this race, however, she was disqualified in prelims of 2019 Pac-12s, so we never got a chance to see what she could do in finals. She did swim a best time in her 100 fly there on the back end of a 200 free/100 fly double, so that bodes well for her 200 fly. McLaughlin was 4th in this race last season, and will enter the meet with a 1:54.63 from midseason.

Also looking to return to the final are Louisville’s Grace Oglesby (1:52.64) and Michigan’s Vanessa Krause (1:53.31). Texas A&M’s Taylor Pike (1:54.05) enters the meet 10th after scoring in the B final in 2018. Teammate Jing Quah (1:53.05) was disqualified in this race last season but has a good shot at a top 8 finish with her best time. Texas’ Remedy Rule missed out on the final last season, but did qualify for the championship heat at 2017 NCAAs before being ultimately disqualified for a 15-meter violation in the final. This could be her year, though, as she’s already been a lifetime best 1:53.65 this season. Similarly, teammate Lauren Case (1:53.44) missed out on the finals heats in 2018, but was a finalist as a freshman, placing 6th in 2017.

Maddie Wright is a near lock to make A final imo. Not sold on Rule or Carter or McLaughlin (who has become more of a sprinter).

Lots of down votes. I can try and clarify – not knocking the three girls, they are solid, but Maddie has been A finalist the past two years and went a pr this year. Odds are she will be back and will knock one of those three out.

I think Courtney Harnish has the potential to A-Final here. Although she’s focused more on distance free in college she was a very good 200 butterflier in high school.