2019 W. NCAA Previews: A Loaded 100 Free Where Anything Could Happen 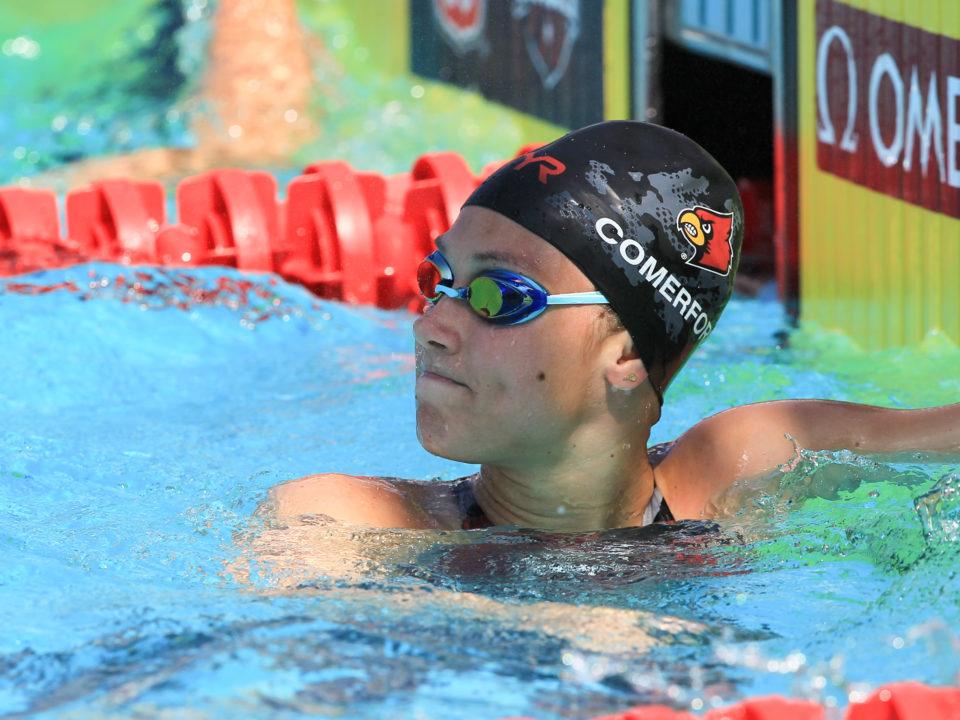 This year's field of 100 freestylers includes 4 of the top 10 fastest performers of all time, and 6 of the top 20 performers all-time. Stock photo via Tim Binning/TheSwimPictures.com

The 100 free at this year’s NCAAs has perhaps the tightest, deepest field of swimmers of any event this year. Much like in the 50, we’ve had a few years of Simone Manuel dominating the 100 at NCAAs, but those days are over now, and a battlefield has been left in their wake. This year’s field of 100 freestylers includes 4 of the top 10 fastest performers of all time, and 6 of the top 20 performers all-time. Stanford freshman Taylor Ruck is also a top 10 all-time performer, but opted to swim the 200 back instead of the 100 free on the final day of the meet.

Here are the top 8 seeds on the psych sheet:

Of the top 8, Weitzeil, Brown, Haughey, Bilquist, Burchill, and Adams have all been faster this year than they were last year. Only Mallory Comerford, the fastest returning swimmer from last year, and Abbey Weitzeil have not yet hit a lifetime best in the 100 free this season. Anna Hopkin is in her first year of NCAA competition, and being from the UK, this is her first season swimming Short Course Yards. That being said, it means that Comerford Weitzeil are the only swimmers of the top 8 seeds to not have swum a lifetime best in the 100 free this season.

Comerford’s 100 free from last year’s NCAAs was 46.20, which is also her lifetime best. That time would seed her first this year, makes her the 2nd fastest performer ever, and very well could be fast enough to win the event this year. Comerford being one of two swimmers not to have swum a best time in the 100 this season only adds to the uncertainty of how this event will shake out in the end. One thing Comerford has going for her over the rest of the field in this event is that she, pretty much indisputably has the most experience and success racing in elite-level meets. In that regard, she has a good track record of stepping up when the time comes for her to do so. None of that is to say that other swimmers in the field won’t end up taking the title in this event, rather it just simply means that Comerford has the most veteran-status of the field.

Abbey Weitzeil and Erika Brown have each had fantastic seasons, albeit in different ways for the both of them. Weitzeil has *finally* gotten back to her unbelievable times she posted in her senior year of high school (2016). Most notably, this season she has dropped well over a second from her 200 free best time, and is now just .04 seconds off her 50 free best time, and .06 seconds off her 100 best so far this season. All 3 of those best times were swum in 2016. Weitzeil has seemed like an unstoppable force throughout this season, and it will not take much more than she has already done for her to keep on rolling right to an NCAA title. Her lifetime best 46.29 makes her the 3rd fastest performer of all-time.

Brown, on the other hand, has capitalized on a breakout season last year, and has just kept on dropping time, including establishing a new NCAA record in the 50 free last month. Brown has already blown away her best time in the 100 free so far this season, and there’s every chance she drops another best time at NCAAs. The only question is will it be enough? She definitely has a shot at this title. With her 46.41 from SECs, she is now the 5th fastest 100 freestyler in history.

Siobhan Haughey has edged out her best time in the 100 so far this season, shaving off 0.19 seconds. While she is likely better at the 200 free and 200 IM (her other two individual events) than she is at the 100 free, Haughey is absolutely a favorite to be in the top 8, and depending on wheter she drops time or not, you there’s no telling how high up she could actually finish. She is, afterall, the 8th fastest performer of all time in this event.

Amy Bilquist has not yet been under 47 seconds flat-start in the 100 free, which pretty definitively seems to be a prerequisite for being in the title hunt here. However, Bilquist did split an absolutely incredible 46.30 on Cal’s 400 free relay at Pac-12s this year, a relay which broke the NCAA record. That time certainly points to Bilquist at the very least having the ability breakout in the actual 100 free itself. She’s already dropped a considerable amount of time this season, but she may have more in the tank waiting to be unleashed.

Veronica Burchill, Anna Hopkin, and Claire Adams are sitting in the 47s this season, and all have reasonable good shots at making the A final. All 3 of these swimmers have swum lifetime bests this season, with the caveat that Hopkin is competing SCY for the first time this season. Adams and Burchill came in 9th and 10th respectively in prelims last year at NCAAs, and have both been faster than those times so far this year.

Auburn’s Claire Fisch and Alyssa Tetzloff are also swimmers to watch out for in this event. Fisch is seeded 10th with a 47.48, while Tetzloff is 19th with a 48.03. Tetzloff came in 3rd in this event in prelims last year, and ultimately finished 7th in finals. She has not been super close to her best time of 47.17 this season, but if she can get back there, she has every shot in the world at returning to the A final. Fisch finished 48th in prelims of the 100 last year, and has dropped over half a second in the event so far this year. She added over a second in prelims last year, however, which she can’t do again this year if she wants any hope of coming back for finals.

Virginia junior Morgan Hill is seeded 9th coming into the meet this year with a time that would have come in 9th in prelims last year. She was 5th in the B final at NCAAs last year, and has already been faster this year than she was in the B final last year. Any drop at all in prelims this year should give an excellent shot at a top 8 finish. Hill won 2 races by .01 seconds at ACCs, so if the race is close, she’s shown the ability to get to the wall first.

Darkhorses: Julia Cook, Texas freshman – Cook came into the NCAA this year as the fastest 100 freestyler of the freshmen class, boasting a personal best of 47.82. Her best would seed her in the top 16, but her season best of 48.33 seeds her 24th. There is, however, reason to believe she hasn’t peaked yet this season based on her performances, so we can only guess as to what she’ll do at this meet. Despite her flat-start 100 free time being pretty far off her lifetime best so far this season, Cook did split an impressive 47.25 on the 400 free relay back at the Texas Hall of Fame invite. That split is an indication that we may see Cook swim much faster in the 100 than she has flat-start so far this season.

FYI, three (Bilquist, Adams, and Burchill) of the top eight seeds swam on the Carmel HS team that currently holds the Girls Public HS Record for the 400 freestyle relay.

Are you accusing Carmel of occult assistance? Seems possible…

We’re gonna see 45s from Weitzeil, Comerford, and Brown if she wants it bad enough

If she wants it bad enough?

I should have said three of the top eight pick, not seeds.