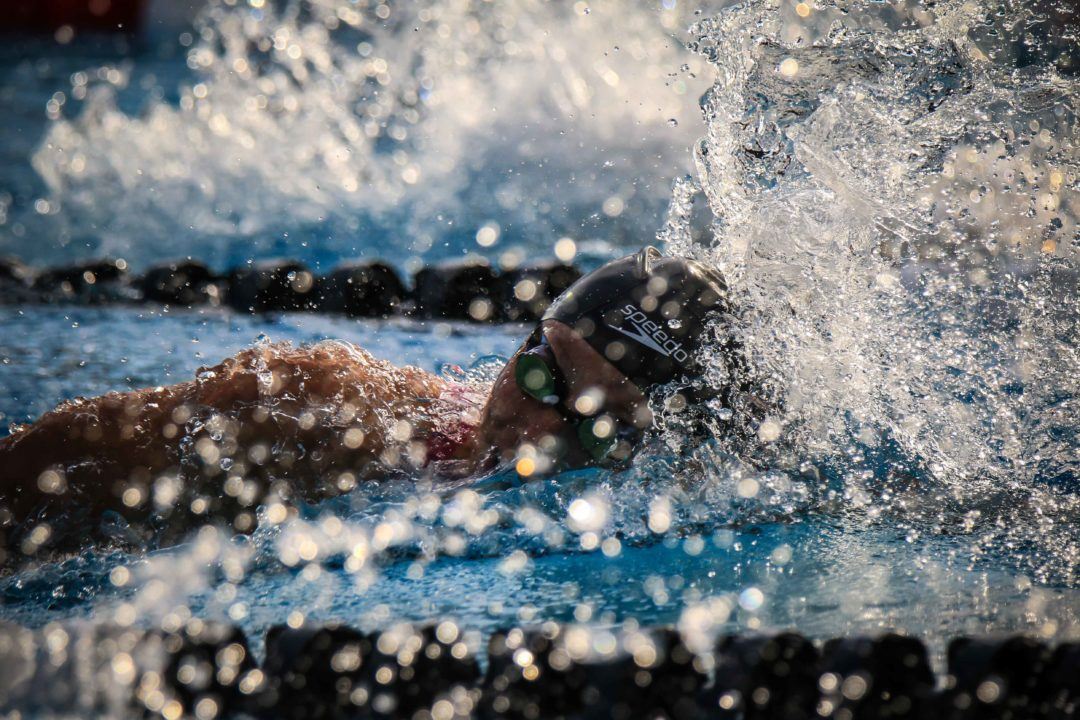 Hali Flickinger's gold in the 200 fly highlighted a night in which the Georgia post-grad group was seen everywhere. Archive photo via Jack Spitser/Spitser Photography

University of Georgia head coach Jack Bauerle has a reputation for focusing on long course success and a track record to back up that reputation. Eight former Bulldogs made the 2016 Olympic team, and recently we’ve seen several swimmers who’ve already had a good deal of success move to Athens to train. And while the Bulldogs tend to focus on the stroke 200s and IM, their accolades run the gamut of events.

While the current college team is at home in Athens gearing up for a dual meet against Texas tomorrow, the post-grad group (and one future Bulldog) was out in full force tonight.

The future Bulldog is, of course, Luca Urlando, who after a breakout long course season last year committed to Georgia as a junior and continued tearing up age group records during the fall, earning a Swammy Award as the 15-16 Age Group Swimmer of the Year. He earned his first PSS win ever tonight, with a 1:57.04 victory in the 200 fly. That’s his fastest time outside of last summer’s championship meets, and the Dart Swimming product projects to be at least an Olympic Trials finalist before he ever steps foot on Georgia’s campus.

In order to get that win tonight, though, Urlando had to beat a field that included three former Bulldogs, all of whom have international experience: Chase Kalisz, Pace Clark, and Jay Litherland. Kalisz and Litherland were 2016 Rio Olympians, and Clark was a member of the 2017 World Championships teams.

Pick an event tonight, and there’s a good chance that there was a Georgia post-grad somewhere in the top eight.

In short, all eight individuals listed as representing Athens Bulldog Swim Club made at least one A-final tonight, representing a grand total of 13 A-final swims over eight of the 12 individual events. And we haven’t even mentioned Melanie Margalis, a Georgia alum who represents her hometown St. Petersburg Aquatics, although she trains in Athens. She finished just behind Flickinger in the 400 free, and had also qualified for the 200 breast A-final this morning before scratching out of that.

It’s not just Georgia alum who are hanging in Athens. Missy Franklin opted to move there from Cal before she opted for retirement. Hinds is a 25 year-old Florida alum who’s not letting a little SEC rivalry get in the way of training with Bauerle. Wilson has a claim to the best Division III swimmer ever, wrecking records while at Emory. He also trained at Texas, including in the run-up to Rio, but he’s also made the change to Georgia.

Georgia’s certainly not the only place with a strong post-grad program. Cal has had a ton of long course success, although we tend to see more of their men stick around after graduating, and Indiana may be the hottest spot in the country, especially for sprinters and breaststrokers. But tonight, the Bulldogs were doing their thing across multiple events as they gear up for Tokyo, now just over a year and a half away.