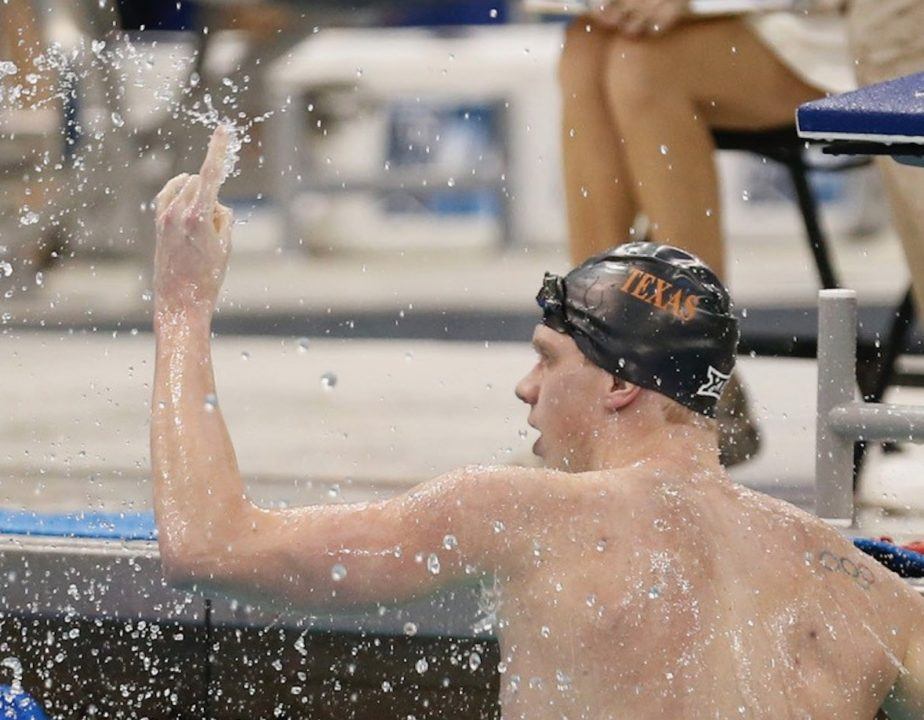 Over the last two years, Texas has brought in the #2 and #1-ranked recruiting classes, both centered around one event: the 200 free. Archive photo via Tim Binning/TheSwimPictures.com

Over the last two years, Texas has brought in the #2 and #1-ranked recruiting classes, both centered around one event: the 200 free.

This current freshman class included four high schoolers under 1:35.5 in that event (plus an upperclassmen transfer), and the class a year earlier had three under 1:36.0. That 200 free depth is going to be come in handy this year, as Texas looks to knock off two-time defending NCAA champs NC State in the 800 free relay.

Texas has the star power. Townley Haas is the best 200-yard freestyler in history, having gone 1:29.50 to win his third-straight NCAA title last year. He wasn’t quite on his game for this relay last year (leading off in 1:30.41) and will have to be at his best if Texas wants to beat the Wolfpack. Texas will return senior Jeff Newkirk, who split 1:32.5 last year but hasn’t looked great this season, going no faster than 1:33.5 so far. That’s why it’s going to be up to those two aforementioned recruiting classes to step up. Drew Kibler was the #2 recruit in his class with a lifetime-best of 1:32.66 coming out of high school. He’s already been 1:32.2 this year and could very well split 1:30-point if he’s on. Meanwhile backstroker Austin Katz was on the relay last year as a freshman, going 1:32.2 – he should only be faster in his sophomore campaign.

NC State only graduated one leg from their relay last year, but it was a 1:31.0 from relay hero Ryan Held. They return Justin Ress, who split 1:30.7 last year, plus 1:31.3 leadoff man Andreas Vazaios. Do-everything talent Jacob Molacek was 1:32.1 last year, and one logical choice to fill Held’s shoes is backstroker Coleman Stewart. He went just 1:34.4 individually at mid-season, but split 41.6 in a 100 free at NCAAs last year and has a strong enough 200 back to suggest he’s got a 1:32-low split in him. The only wrinkle is that NC State used Stewart on the other four relays at ACCs, leaving him off this one in favor of senior Noah Hensley, who split 1:34.0.

The other team to keep an eye on is last year’s runners-up from Indiana. They lose 1:29-leadoff man Blake Pieroni, but gained 1:31.1 talent Zach Apple in a transfer from Auburn. The other three legs (1:31.9 Mohamed Samy; 1:32.2 Vini Lanza; 1:32.2 Ian Finnerty) return, and if they don’t want a breaststroker holding down a leg, they’ve got a couple of young distance swimmers (Mikey Calvillo, Michael Brinegar) who probably don’t have the speed for a 200, but could show up with a big freshman taper.

Those three seem like the class and any of the three could conceivably break the NCAA record set last year by NC State at 6:05.31. Texas should be very much in the hunt for their own American record of 6:07.59 from last year. This event has gotten exponentially faster since it’s move to day 1 at NCAAs, and that trend should only continue this year.

The next tier of teams includes Florida, Cal and Missouri. Florida comes in with the nation’s top time this year, spurred on by a big performance out of their highly-touted freshman class. Trey Freeman led off in 1:33.83 and fellow rookie Kieran Smith was 1:32.0 on his leg at SECs. Freeman might have more time to drop (he was 1:33.0 coming out of high school). Junior Khader Baqlah is the true power of the relay; he split 1:31.6 last year at NCAAs. And former long course world junior record-holder Maxime Rooney has massive potential. He was a little disappointing in this event last year, splitting 1:33.2 and only going 1:34.3 individually at NCAAs. But he split 1:32.1 at SECs and looks as good as he ever has in his career.

Cal has one of the best individual swimmers in the field in Andrew Seliskar – he won a U.S. national title in long course this summer and this season has gone 1:30-point both from a flat start and a relay start. There’s a real chance he leads off in 1:29, putting Cal out in open water, much the way Pieroni did for Indiana last year. Cal returns 1:33.8 split Zheng Quah (who was already faster than that from a flat start at Pac-12s) and should swap out a couple of disappointing legs from last year. Sophomores Trenton Julian and Bryce Mefford are rising fast. Julian went a lifetime-best 1:34.1 at Pac-12s. Mefford has been as fast as 1:32.9 individually.

Mizzou had a stellar SEC showing, and has SEC champ Mikel Schreuders (1:31.2 this season) to lead off. Jack Dahlgren has been a freshman sensation, splitting 1:31.7 at SECs, and if he can back it up at NCAAs, this relay has two stellar legs. Depth will be an issue though – Giovanny Lima was 1:32.9 at SECs, but that’s an outlier swim compared to the four swims he’s put up between 1:34.2 and 1:34.7 between SECs and Mizzou’s last chance meet. They used 1:35.5 Kyle Leach on the end at SECs, but could probably upgrade to Sam Coffman, who split 1:33.4 at NCAAs last year.

There are a handful of teams vying for the final spots in the top 8. Louisville returns all four legs from last year’s 7th-place relay, including a 1:32.1 split from flyer Zach Harting. They also had two freshmen at ACCs outsplit what their two slowest legs went at NCAAs last year.

Stanford has highly-anticipated freshman Jack Levant, coming off a massive summer. He could pop a huge swim, and has already been 1:32.6 individually this year. They’ll get faster from Pac-12s, too, subbing IMer Abrahm DeVine in for one of their 1:34 legs.

Update: Levant is out of the meet for Stanford, which puts this relay in tough shape.

Harvard should get a 1:29/1:30 type leg from Dean Farris, and does return all four legs from last year. The problem is that the other four legs went 1:34/1:35/1:36, and Harvard will need more to make the top 8, even with Farris’s brilliance. Michigan can bookend their relay with mid-distance star Felix Auboeck and big-time freshman Patrick Callan. Both are elite talents, but project better to the 500 and up than the 200 and down, so their impact is somewhat limited. Ohio State nearly beat Michigan at Big Tens with a deep lineup and a 1:31.3 anchor split from standout sophomore Paul DeLakis. They need to improve their 1:35 leg from both Big Tens and last season to have a chance.

Arizona State should have been in the mix, but lost star Cameron Craig and several other key legs for various reasons this season. USC lost half their 2018 relay to either graduation or transfer. Georgia graduated two of their four from last year and don’t seem to have a ton of good options to replace them.

The race within the race: multiple men could be after Haas’s NCAA and American 200 free record, or Farris’s fastest relay split in history. Depending on who leads off and who swims from a flying start, Haas, Seliskar, Farris and even Ress or Apple could be after either of those marks: a flat-start 1:29.50 and a relay start 1:30.22.

Dark Horse: Virginia. The Cavaliers swam two freshman and a sophomore on last year’s NCAA relay under rookie head coach Todd Desorbo. That group appears to be growing together: Ryan Baker has already been 1:33.8 compared to his 1:35.4 leadoff a year ago. Sam Schilling split 1:33.8 at ACCs after splitting 1:34.9 at NCAAs last year. And Cooper Wozencraft went 1:33.8 individually and split 1:33.5 – he was 1:33.7 last year. If they can fill the fourth leg and drop some more time at NCAAs, they could be a suprise top 8 team after taking 18th a year ago.

Georgia will surprise people once again in this event. They never look great going into NC’s but somehow always manage a top 8

I’m curious about NC States 4th leg but not really worried. I think there three returning legs will be faster. Andreas 1:30.8 lead off , 1:31.2 is logical for molacek, and Ress is a god on relay anchors so 1:29 high is in sight. If they get a 1:32 mid to low they should win.

IU will be just as good or better

Does it matter that they’ll be in a different heat than the other favorites? I can’t decide. It could work either way.