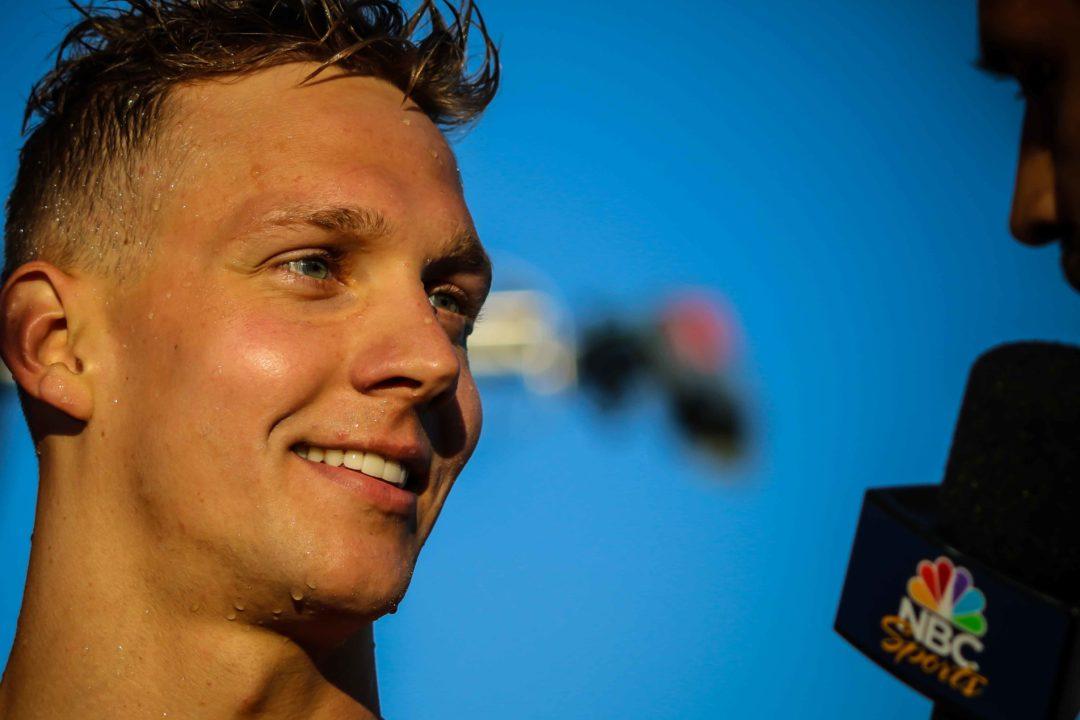 After Australia’s Matthew Wilson tied the World Record in the 200 breast semis, we’ll see both World Record holders competing in tonight’s final. Japan’s Ippei Watanabe shares that record with Wilson. Also in the mix is Kazakhstan’s Dmitriy Balandin, who won this event at the 2016 Olympics.

Another man with the potential to break World Records tonight is Caeleb Dressel, who missed the 100 free record by just 5 hundredths as he won gold in the event last night. Tonight, Dressel will swim semis of the 100 fly and 50 free, with only the women’s 200 back semifinals in between. However, Dressel did very well in winning this double at 2017 Worlds and was just 4 hundredths off Michael Phelps’ 100 fly World Record there. The 100 fly record is also in danger of being taken down by Hungary’s Kristof Milak, who smashed Phelps’ 200 fly World Record to win gold earlier in the meet.

Russia’s Anton Chupkov and Yuliya Efimova seek to defend their 200 breast titles tonight. Another defending champion is Evgeny Rylov, the heavy favorite in the men’s 200 back. Also in that 200 back will be the USA’s Olympic Champion Ryan Murphy, who is chasing his first individual medal of the meet. The USA’s Simone Manuel steps up to defend her 100 free title but will have her hands full against World Record holder Sarah Sjostrom and Australia’s Cate Campbell, who held that World Record before Sjostrom broke it in 2017.

The USA’s Simone Manuel gets it done again. Manuel flipped under World Record pace in 24.81 and held her lead over the final 50 meters, posting a new American Record of 52.04 to repeat as champion. Manuel is just the 2nd woman to repeat as champion in this race. The last time it was done was in 1975 when East Germany’s Kornelia Ender earned back-to-back titles. Australia’s Cate Campbell was a bit faster on the back half, but Manuel’s lead was too much to overcome as Campbell took silver in 52.43, out-touching World Record holder Sarah Sjostrom (52.46) of Sweden.

The USA’s Caeleb Dressel set his first World Record tonight. Dressel, who missed the World Record last Worlds by only 4 hundredths, cracked the record by tenths tonight in 49.50. The former mark was a 49.82 done by Michael Phelps in 2009. Dressel leads the way into finals by nearly a second and a half and now owns 6 of the 10 fastest times in history in this event. He’ll return to the pool shortly for semifinals of the 50 free.

The USA’s teenage standout Regan Smith broke the World Junior Record in prelims, but tonight she went straight for the World Record. Smith knocked almost 3 seconds off her lifetime best, blowing away the World Record in 2:03.35. That took down Missy Franklin’s former mark of 2:04.06 from her Olympic performance in 2012, making Smith the first woman to ever break 2:04. She touched the wall in her heat over 3 seconds ahead of Canada’s 100 back champion Kylie Masse (2:06.57).

Italy’s Margherita Panziera, who became the 5th fastest performer in history earlier this year, touched just behind Masse in 2:06.62. Winning the first semifinal heat was Australia’s Minna Atherton (2:07.38), a tenth ahead of Hungary’s Katinka Hosszu, the 200 IM champion here and an Olympic medalist in this race. Australia, Canada, and Hungary will all have 2 in the final. Kaylee McKeown (2:08.19) qualified 6th for the Aussies. Canada’s Taylor Ruck (2:08.42) and Hungary’s Katalin Burian rounded out the top 8.

One spot shy of the final was the USA’s Kathleen Baker in 2:09.68. Baker returned to competition this week after dealing with a rib injury this season, but hasn’t made the individual podium at this meet.

Caeleb Dressel topped the semis again, just 3 hundredths short of his American Record in 21.18. Dressel’s time is the 10th fastest performance ever. After the race, he said he was faster than he expected to be tonight, so he may have more in the tank for tomorrow. He was about half a second faster than his heat as Russia’s Vlad Morozov hit the wall in 21.65. Morozov looks to earn his first individual medal here after missing finals of the 100 free earlier in the meet.

Brazil’s Bruno Fratus won the first semifinal heat, clocking in at 21.53. Ben Proud, the 3rd fastest man ever in this event, touched just behind Fratus in 21.56. Japan’s Shinri Shioura was hundredths shy of his own Japanese Record to qualify 7th for the final. Michael Andrew (USA) snuck in at 8th in 21.77 and is still on track to make finals of all 4 stroke 50s at this meet. Only the 50 back remains.

Russia’s Yuliya Efimova became the first woman to threepeat in this event as she broke away from the field on the 2nd 50 to dominate in 2:20.17. She was nearly a second and a half ahead of the field. South Africa’s Tatjana Schoenmaker didn’t match her South African Record from semis, but still earned South Africa’s first medal in this event with a 2:22.52 for silver. Canada’s Sydney Pickrem earned her 2nd bronze of the meet with a 2:22.90.

Russia’s Evgeny Rylov and the USA’s Ryan Murphy battled again in the 200 back, with Rylov defending his title on 1:53.40. Murphy made a move on the 3rd 50 to close in on Rylov, but Rylov had the speed down the stretch to extend his lead again. He’s now the 3rd man ever, the other two being Ryan Lochte and Aaron Peirsol, to win multiple World titles in this event. Rylov was just 4 hundredths away from his best time. Murphy repeated as the silver medalist in 1:54.12.

The USA’s Jacob Pebley, who took bronze in 2017, was in the hunt for bronze as he turned for the final lap. He fell off the pace in the last 50, however, taking 6th in 1:56.72. Great Britain’s Luke Greenbank used his closing speed to take the final podium spot, touching in 1:55.85. Japan’s Ryosukie Irie, a multi-time World and olympic medalist in this event, picked up a 5th place finish in 1:56.52 behind Poland’s Radoslaw Kawecki (1:56.37).

Sweden’s Sarah Sjostrom set herself up well to go for her 3rd-straight title in this event. No one in the field was close to Sjostrom, who owns the World Record in this race. Her 24.79 tonight is a little over 3 tenths away from the World Record. Sjostrom owns all 10 of the 10 fastest performances in history. Tonight, her performance was the 5th fastest in history.

The Netherlands’ Ranomi Kromowidjojo is the 2nd seed for finals in 25.54. Kromowidjojo is the 2018 Short Course World Champion in this event and the 2017 Worlds silver medalist. American Record holder Kelsi Dahlia is the 4th seed in 25.59, just a tenth off her record. She took 2nd in the first semis heat to France’s Marie Wattel. Wattel’s 25.56 was a new French Record, breaking the mark formerly set by Melanie Henique at 25.63 in 2017.

The men’s 200 breast brought the 3rd World Record and the 3rd Russian victory of the night. Minutes after Efimova nabbed 200 breast gold, Anton Chupkov brought it home for Russia in the men’s race. Chupkov was in 8th at the halfway point, but put himself into position on the 3rd 50 to make his big move down the stretch. He closed in 31.89 to blow by the field en route to a 2:06.12 World Record.

Before tonight, Australia’s Matthew Wilson and Japan’s Ippei Watanabe shared the World Record at 2:06.67. Wilson, who set the mark in semis, was just a hundredth slower tonight with a 2:06.68 for silver. Watanabe’s 2:06.73 for bronze was the fastest he’s been since he set that former World Record back in 2017. Another Australian, Zac Stubblety-Cook, was just off the podium at 4th in 2:07.36. Behind him, Germany’s Marco Koch was just over a tenth shy of his German Record to take 5th in 2:07.60.

Team USA’s Andrew Wilson was out in 2nd at the halfway point, but couldn’t match the field’s back-half pace as he took 6th in 2:08.10. Kazakhstan’s Dmitriy Balandin, the reigning Olympic Champion in this race, finished 7th in 2:08.25. Sweden’s Erik Persson (2:08.39) nearly ran down Balandin on the back half.

Great Britain was out to the lead as Duncan Scott put up a 1:44.91, breaking the British Record in the 200 free in the process. Calum Jarvis kept them in the lead with a 1:45.58 on the 2nd leg, but the USA was closing in as Blake Pieroni split a 1:44.98. Australia pulled themselves into the lead on the 3rd leg, however, as Alexander Graham split a 1:45.05. Mack Horton then finished the job for Australia with a 1:44.85 anchor to win it. Australia won their first gold in this race since 2003 with a new Australian Record of 7:00.85.

Great Britain slipped back into 5th overall with a 7:02.04. It ended up being a battle for silver between the USA (7:01.96) and Russia (7:01.81). Aleksandr Krasnykh outsplit Zach Apple by over half a second on the 3rd leg, and while Townley Haas had the faster anchor leg for the USA, the Russians still came out ahead for silver. The Americans took bronze for the 2nd-straight World Championships.

Caught it without comments

Haha I like this a lot better than “first”

both , its easier to enjoy

World records for both, no need to pick 🙂

I’m a little surprised Australia is frontending the relay or was Horton foxing a bit this morning and is gonna drop a nice split? I guess it’s not like Kyle was impressive in the individual.

I did wonder this afternoon if they might try to get a lead out – even if they might put Chalmers up first – anyway we’ll see later how it turns out.

Yefimova win was bad and i not watch she race and podium. USSR hymn must banned. This communism symbol. I am not stand up russian hymn.

no worries – no need to watch