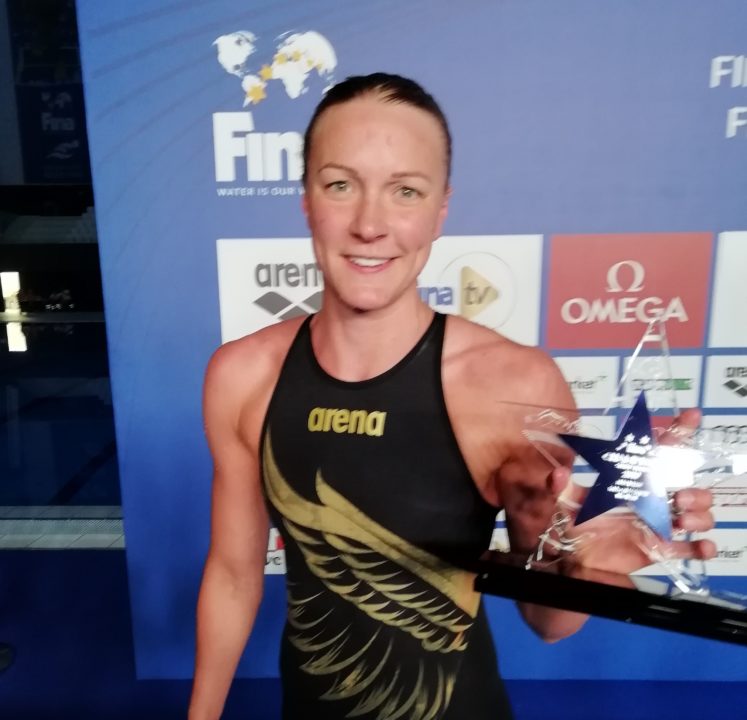 With 5 individual gold medals and a relay silver, Sweden’s Sarah Sjostrom dominated the earnings table at the second stop of the FINA Champions Swim Series in Budapest. Current photo via Adrian Mancebo/SwimSwam

With 5 individual gold medals and a relay silver, Sweden’s Sarah Sjostrom dominated the earnings table at the second stop of the FINA Champions Swim Series in Budapest. Sjostrom added $33,000 on Sunday to the $20,000 she had won on Saturday, bringing her weekend total to $53,000. Katinka Hosszu had a big second day with three individual golds of her own. She wrapped up the weekend with the second-highest total earnings for the Budapest stop, with $38,000. Russia’s Yuliya Efimova won all three of the breaststroke events over the two-day meet and added a third-place relay finish to bring her earnings to $32,000.

Once again, those swimmers who took home the most money were those who were invited to race multiple events. Katie Meili, Farida Osman, Penny Oleksiak, and Pernille Blume all cleared $20,000 for the weekend without winning an individual event, for example.

FINA has decided to award prize money to fourth-place relays and will retroactively include the mixed relays from Guangzhou. Originally, FINA had proposed $2,000 for the fourth relays but did not mention awards beyond third place in its final documentation. (We do not yet know how much money will be awarded for these relays but will update our tables when we find out.)

During last seven months by the end of May FINA will pay Sjostrom a half of a million dollars prize money. It isn’t that much if to compare to sports with large stadiums and almost 24/7 tv and other media coverage. But what makes FINA really different in this regard is that behind a few swimmers with more or less decent compensation there is a gap so huge that a level of earnings for the rest of swimmers is below poverty level in developed countries. Is it because the management of international swimming isn’t capable to make a sport of swimming a profession profitable enough for the middle level swimmer to support living. Or it is the specific of this… Read more »