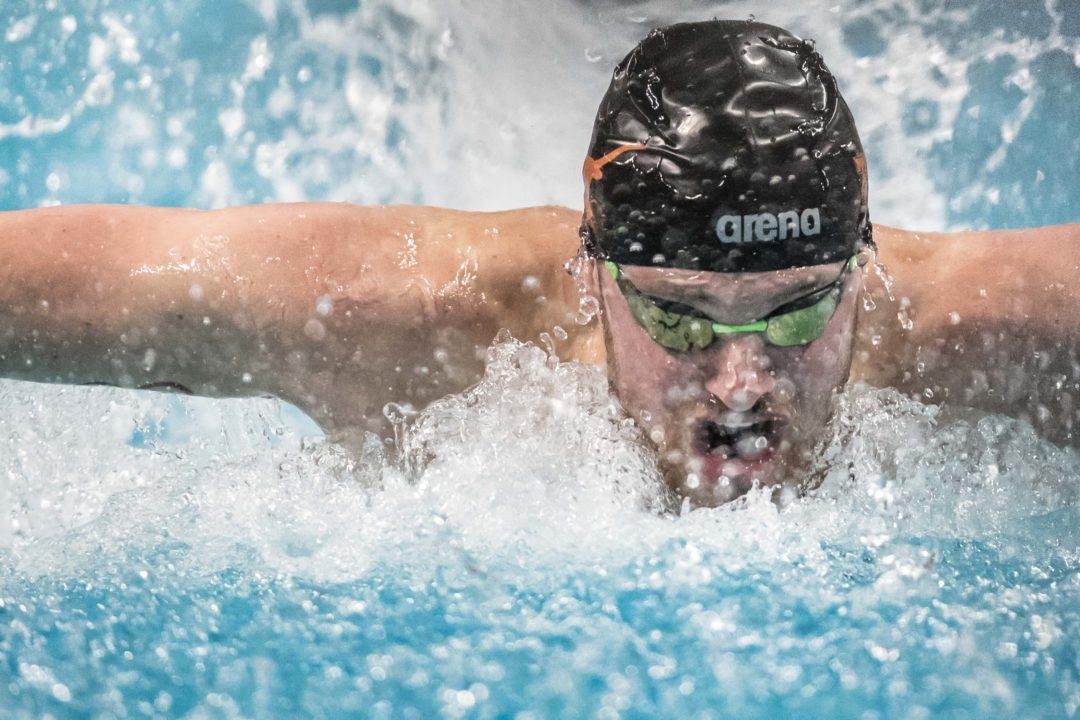 After going 51.00 earlier in the year, Jack Conger is poised to join the elusive sub-51 club at Nationals in the 100 fly. Archive photo via Mike Lewis/Ola Vista Photography

Last summer everything went perfectly for Caeleb Dressel in the 100 butterfly. After upsetting Joseph Schooling for the NCAA title in March, he lopped 1.35 seconds off his best time to win the event at U.S. World Trials in 50.87, joining a select few who had gone sub-51 since the super-suits were banned at the beginning of 2010.

After that swim, it was clear the Florida Gator would challenge for the World title in Budapest, but no one expected the performances that he had in store.

The then 20-year-old swam three of the fastest six swims in history from prelims to semis to finals, finishing with a time of 49.86 which was over half a second better than the fastest ever textile time (excluding his prelim and semi swims) and fell just .04 shy of Michael Phelps‘ world record from 2009. The field last summer was the fastest in history, including 2009, and Dressel still won by over three quarters of a second.

Last year was a bit of an experiment for Dressel and coach Gregg Troy in terms of how much rest to give Caeleb from Trials to Worlds, but they really hit the nail on the head. He did just enough to qualify in his primary events and left a ton of room for improvement when the big meet came around. We should see Dressel in similar form in Irvine, with somewhere around a 50-mid in the cards before he drops who knows what at Pan Pacs.

Last summer it was really a four horse race at Trials between Dressel, Tim Phillips, Jack Conger and Tom Shields for the two World Championship spots. This year, those three behind Dressel are in contention once again, but the only one who looks like he’ll have a shot at challenging for the win is Conger.

Having graduated from Texas after the 2017 season, Conger wouldn’t be tapering down in March for the NCAA Championships for the first time in four years. So instead, he and his Texas pro group teammates rested and shaved for the Atlanta Pro Swim, where he swam a lifetime best 51.00 in the 100 fly. That currently ranks him as the fastest American this year by nearly a second, and 2nd in the world. After missing the Olympic team in the event by .06 in 2016 and then the Worlds team by .03 last year, he looks like he’s finally going to bust through and join the elusive sub-51 club. Only eight men have done so since the beginning of 2010.

Phillips and Shields are relative veterans in this field, both 27, and are a bit of a question mark heading into Nationals.

Phillips’ in-season best of 52.88 is just .01 off his from last year, but he hasn’t raced nearly as much and was last seen at the Mesa Pro Series in April. He did show massive improvements from Atlanta to Mesa (March to April), which is a positive, but it’s unclear whether or not he’ll show up in the 51.3 form we’ve seen at the last two Trials, or if he’s been focused on things outside the pool recently.

After missing the World Championship team and then undergoing surgery at the end of last year, Shields has taken a new approach to training.

In an interview in May at the Indy Pro Swim, he spoke about doing things his way, an increased focus on the 200, and that every year he has it in the back of his mind that this could be his last (since graduating from Cal). He’s had a couple of 52-highs and a lot of 53s this year, which isn’t necessarily a bad thing as he also mentioned he was trying to figure out how to consistently be faster at the big meets than in-season, but just two years after swimming the Olympic final, is now far from a sure thing to make the Pan Pac team. This could be a make or break meet for him.

The biggest surprise in the event this year has been Michael Andrew. He hadn’t cracked 53 seconds since 2015 coming into the year, but now finds himself as the 2nd fastest American behind Conger at 51.86. This event does fall on a busy day for him, with the 50 breast and then the 50 back directly afterwards, but he has shown great ability in swimming sprints back-to-back (see the TYR Pro Derby) and looks like he fully intends to swim all three. If he can just take off a few tenths and get into that 51-mid range, he’ll have a great shot at 3rd with Phillips and Shields both up in the air.

Darkhorse: 19-year-old Ariel Spektor of the Bolles School Sharks dropped his PB by over a second in April down to 52.94, and is an outside threat to challenge the big names.

I think Giles Smith will be fast here could beat Andrew.

13
-5
Reply
Swimmer A
Reply to  Hswimmer

It’s awesome to see him still swimming. His second 50 looked really good in Columbus too.

Giles is such a great person. Best wishes to him!

Would love to see Held sneak into the final 8