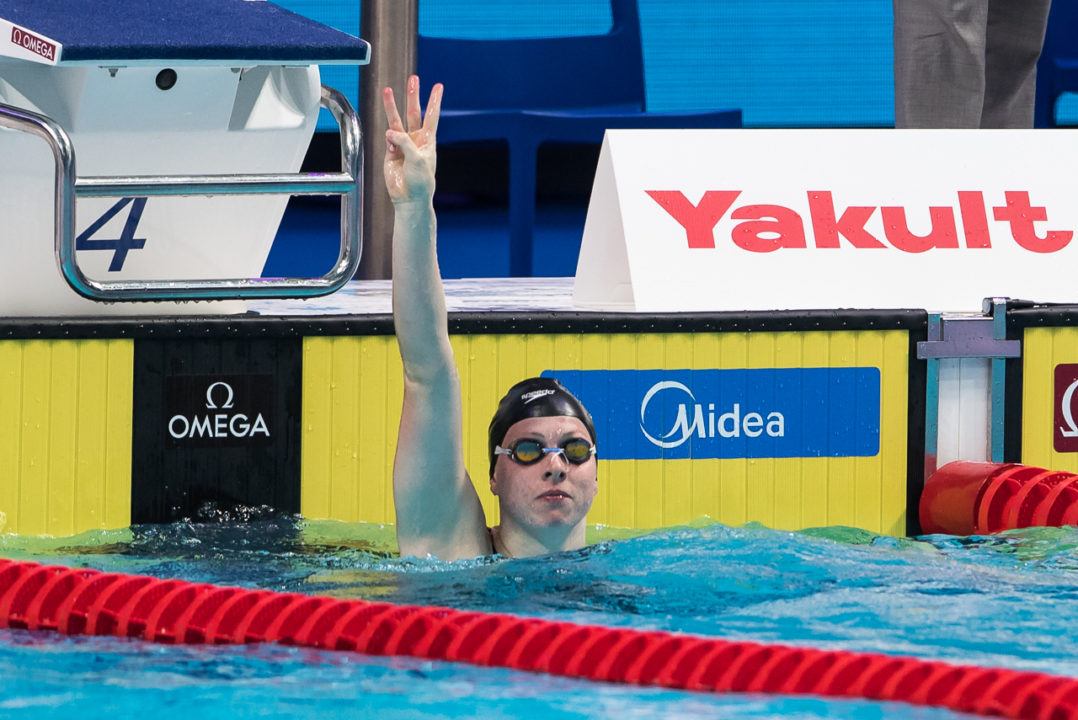 This race is Lilly King's to lose. Archive photo via Peter Sukenik/www.petersukenik.com

Lilly King of Indiana has owned the women’s 100 breast since she broke out with her performance in Rio, defeating Yulia Efimova in a spell-binding rivalry caked with doping allegations, ego, and fierce competition. On the American stage, she’s nearly a full second ahead of any other swimmer when it comes to best times, and it wouldn’t be surprising if King wasn’t on any big taper. She’s already been 1:05.61 this year, a time that would rank her 10th on the all-time, top performer rankings — 10th, if she wasn’t already 1st with her world record 1:04.13 from last summer.

We can cool it on the Efimova debacle for now; King and Efimova did partake in some one-upsmanship this summer from different meets, but they won’t face one another at a champs meet in 2018, with King going to Pan Pacs and Efimova to Euros.

Meanwhile, Katie Meili of New York Athletic Club looks to be #2 in line, in a 1-2 American duo reminiscent of Katie Ledecky and Leah Smith. King and Meili were gold and bronze, respectively, in this event in Rio, and Ledecky and Smith found themselves in those same podium finishes in the 400 free. Meili’s 1:05.03 from last summer ranks her sixth all-time performer, and while she’s been juggling training with law school at Georgetown, her 1:06.49 from the Austin PSS has her in great shape for a top finish.

If anyone is going to keep Meili from 2nd in Irvine, it’ll be Molly Hannis. The Tennessee post grad (TNAQ) has actually been 1:06.09 this year, the 2nd-fastest of any American in 2018. That was a best time when she swam it at the Atlanta PSS. Hannis is definitely known for being very fast in season, though, so she may not have more to go. We can’t forget her come-from-behind performance at 2016 Olympic Trials that earned her a ticket to Rio in the 200 breast, moving from 4th to 2nd over the last 50 meters.

This event, unlike the women’s backstroke, doesn’t have a young star who has a realistic shot at making Pan Pacs this year. Fourth in the U.S. rankings this year is Micah Sumrall (formerly Lawrence), a 2012 Olympian who was 1:07.51 in Atlanta. That’s exactly a second off of her lifetime best from 2014, and it’s a promising sign as she’s back from an extended break from the pool (which included her wedding).

Former Texas A&M Aggies Bethany Galat and Breeja Larson enter the mix, with Galat looking for a title in the 200. She’s so much better over longer distances, but was able to pull out a very strong 1:06.72 last summer, ahead of Larson’s 1:07.43. Larson is a 2012 Olympian, like Sumrall, but she’s still gunning for another chance (or more, if she makes top 2) to represent the U.S. in an international championship.

Though they have the experience, Larson and Sumrall have PRs dating back to 2012 and 2014, respectively, leaving the door open for fresh talent to rise and challenge them.

Collegians Miranda Tucker of Michigan and Olivia Anderson of Texas will look to drop time to score an international roster spot, as well as another former Aggie, Jorie Caneta. Tucker was 1:07.62 last summer, while Anderson and Caneta were bunched up at 1:08.25 and 1:08.27, respectively. Tucker was the only woman not named Lilly King to break 58 at NCAAs this spring, clocking a 57.98.

Teenagers Zoe Bartel and Emily Weiss were both under 1:08 last summer, with Bartel projecting more to the 200 breast and Weiss the opposite way– she’s more of a pure sprinter. Weiss was one of the first of the new wave of early commits, verbally committing to IU the summer before her junior year of high school. Can you guess whose path she’s following? Weiss knocked off King’s Indiana HS record as a sophomore and has taken it down to a 58.40 as a junior, notching a new national HS record.

Weiss certainly has the momentum as we head into the final stretch– she was 1:07.99 last summer, and has already been 1:08.03 this year without significant rest.

NOTE: This author initially wrote out a little blurb for Delaney Duncan to be the dark horse, only to find she’s not racing at Nationals.

Maybe at US Nats, but it looks like Efimova has the edge.

Yulia will kick butt, take no prisoners and finger waggle to the top of the podium this summer.

….Or get caught for doping again…apparently water can do the trick now

They should let her race in Tokyo. Russia borders the Pacific Ocean so why not.

LEN countries are not allowed to compete at pan pacs.

Where is Efimova training? Is she at Trojan with Meilutyte?

Alex Walsh is a dark horse here unless she really wants to focus on 200 IM since Cox is out.

I think Bartell will final