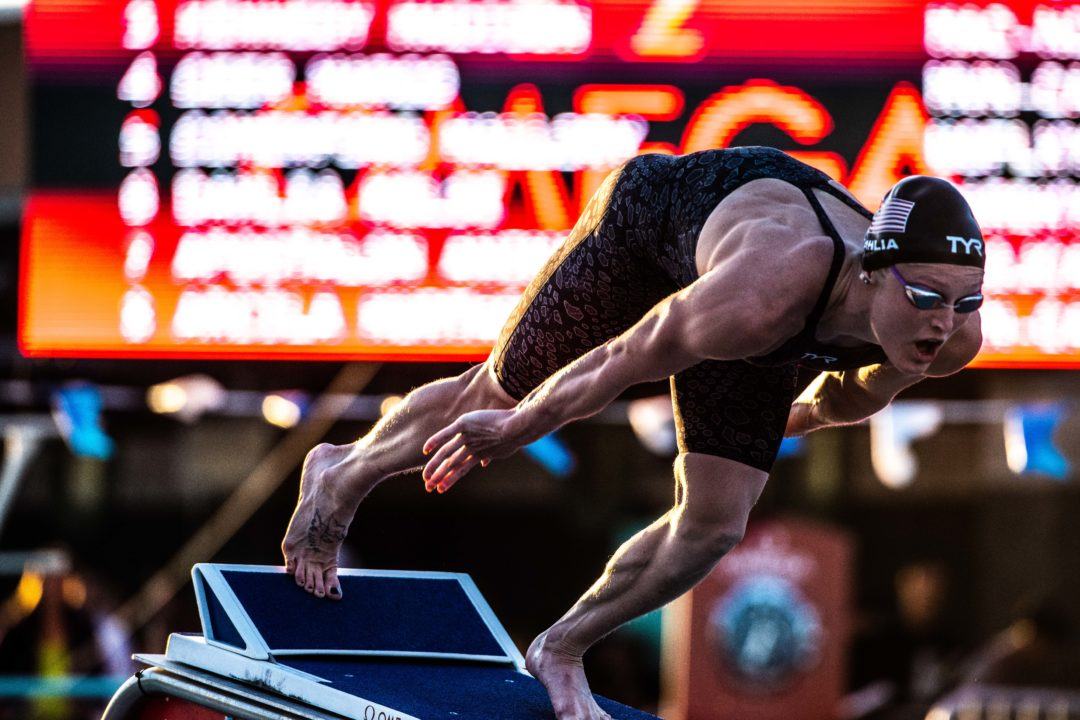 Kelsi Dahlia's 25.48 AR is in danger, thanks to, well, herself. Archive photo via Mike Lewis/Ola Vista Photography

This race is Kelsi Dahlia‘s (formerly Worrell’s) to lose. The 2017 U.S. Champion, Dahlia has taken over the role of America’s #1 flyer since it belonged to Dana Vollmer, and she is the American record holder in this race.

In the absence of Vollmer, from whom the latest word is that she “most likely” won’t swim Nationals while working her way back from the birth of her second child, there’s not a proven challenger for Worrell in this race and the spot on the 2019 World Championship team.

Hellen Moffitt finished 2nd in this race to Dahlia last summer at Nationals (26.19) with Kendyl Stewart taking 3rd (26.24). Moffitt and Stewart are both training with Team Elite – West, and they’ve been 26.39 and 26.45, respectively, this spring.

2nd this year out of the Americans, though, is IU post grad team member Amanda Kendall. Kendall has served a three-month doping suspension earlier this year, though her 26.07 from January, prior to that suspension, ranks 2nd behind Dahlia.

Though they’re both more of 100/200 butterfliers, Sarah Gibson and Katie McLaughlin are both ranked in America’s top 10 this year, with Gibson at 26.70 and McLaughlin at 26.75. McLaughlin, in particular, has been on fire this spring and her sprints have never looked better. If anyone is going to sneak up to challenge for a top three or four spot, it’s probably her or Mallory Comerford. Comerford’s 26.65 ranks her 6th among Americans in 2018, but it isn’t likely she’ll race this as she’ll probably focus on the 200 free on the same day of competition in Irvine. She also didn’t choose to race this event at last year’s Nationals, but if she wanted to, she’d be a contender for a top 5 spot.

Another sleeper pick is Erika Brown. The rising Tennessee junior had a breakout year in butterfly, going from a 55-second yards flyer before this season, to blasting the fastest-ever medley relay split (49.11). Her improvements are carrying over to LCM, as she’s been 26.64 in the 50 and 59.1 in the 100 already this spring, and she probably has more to drop.

This isn’t a big event for age group stars, although there are a few names to keep an eye on.

Emma Carlton of Bellingham Bay is 12th this year (27.06), ahead of Gator Swim Club’s Talia Bates (27.08) and Gretchen Walsh of Nashville Aquatic Club (27.14). Amalie Fackenthal of DART was 27.02 in 2017, while backstroke specialists Isabelle Stadden and Regan Smith could be dangerous, too.

Dark Horse: Maddie Murphy. The rising Cal junior has been 26.60, and she’s seen progression in her first two seasons with the Golden Bears.

Why call Regan Smith a “backstroke specialist”. It isn’t really accurate anymore. Look at her National rankings in the 100 and 200 Fly this year. Yes, she’s better currently (top 2-3)in backstroke. But she’s very very competitive in fly. She has a legitimate shot at top 3 in the 200 Fly unless, with 200 back next day, she waits to swim it at Pan Pacs or Jr Pan Pacs. I think she’s earned the right not to be pigeonholed as “just” a backstroker.

Never said she was “just” a backstroker, that was your word. I don’t think it’s off to call her a backstroke specialist — she’s an international medal threat in the backstrokes, or at least a finals threat. She isn’t so in anything else. Does her being a backstroke specialist mean she can’t be a fantastic butterflyer or IM’er or mid-distance freestyler? Nope, and I hope she can get to that elite level in other events.