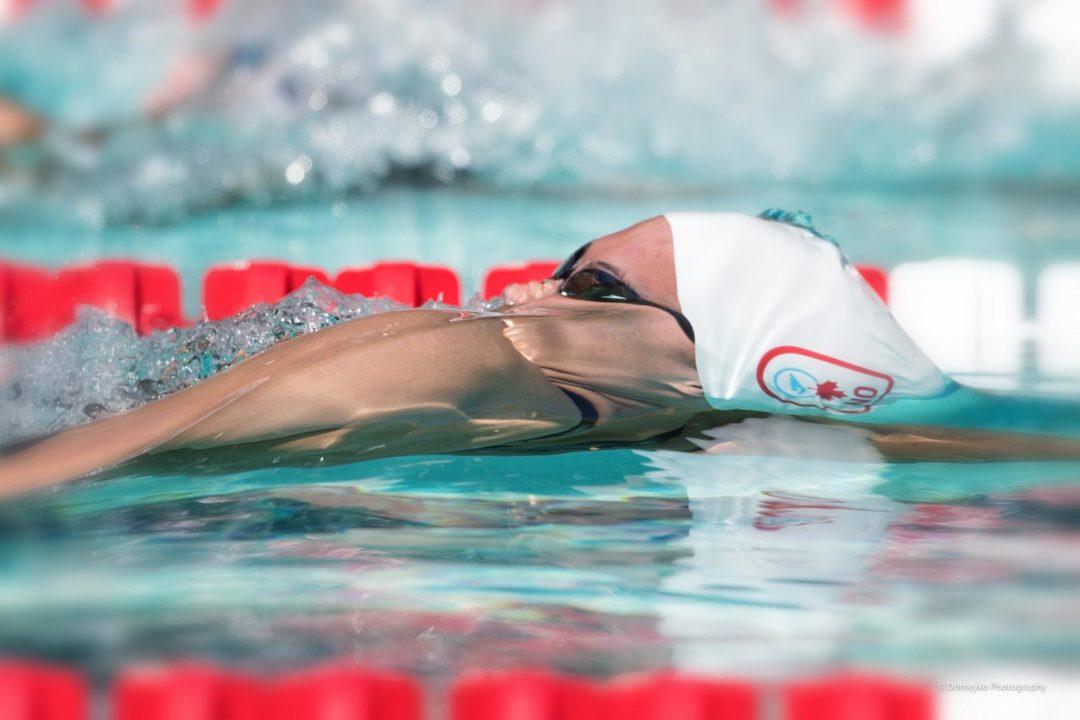 Kylie Masse spent a year and three days as owner of the 100 backstroke world record. Now, she gets to compete against her usurper to retake that throne. Archive photo via “Rafael/Domeyko Photography”

Kylie Masse spent a year and three days as owner of the 100 backstroke world record. Now, she gets to compete against her usurper to retake that throne.

Canada’s Masse went 58.10 at last summer’s World Championships, breaking a world record (58.12) that had stood since the fall of the super-suits in 2009. Masse has had a couple of solid 58-mid swims this year (including a win at Commonwealths), but hasn’t yet approached her own world record. That mark fell late last month when American Kathleen Baker went 58.00 in winning a thrilling U.S. National showdown.

Emily Seebohm is the lone holdover from the 2014 medalists. To show how much the world of backstroke has changed, the big story of 2014 Pan Pacs was Seebohm and Belinda Hocking beating Missy Franklin, who was struggling with back spasms. Seebohm returns after taking Worlds bronze last summer (58.59) behind Masse and Baker. She was second to Masse by just .03 at Commonwealths in the 100.

Those three are the presumptive medal favorites in the 100, though there are a few threats from the outside. Olivia Smoliga has proven a true speedster in backstroke, and was second at U.S. Nationals in 58.75. 16-year-old Regan Smith was third while setting a world junior record (58.83), and should be in search of another one. (Those two are also still battling for the second U.S. entry at 2019 Worlds and have every reason in the world to be primed for prelims of this event). Canada’s Taylor Ruck is better at the 200 but is rising faster than perhaps anyone on the planet at present and riding high on an unprecedented 8 medals at Commonwealths. Australia has its own youngster in Kaylee McKeown, who just turned 17 and comes in with a 59.62 seed. Japan, too, has a pair of sub-minute finalist contenders in Anna Konishi (59.62) and Natsumi Sakai (59.77).

In the 200, the race gets tight enough to make pacing and race strategy the key element. Masse leads this year’s world ranks with a 2:05.98 from Commonwealths. But the 18-year-old Ruck was just a half-second back (2:06.42) in that race and is dropping fast. Last summer, Seebohm won Worlds in 2:05.68, but she’s only been 2:06.8 this year and lost Commonwealths to Masse and Ruck head-to-head-to-head.

Baker was last summer’s bronze medalist at Worlds in 2:06.48 – she cut a small margin and tied with the rising star Smith for the U.S. National title last month in 2:06.43.

Smith was 2:07.19 last summer and traded the world junior record back and forth with Australia’s McKeown. Smith broke it in semifinals at Worlds, but McKeown roared back to go 2:06.76 while taking 4th in the Worlds final. Smith faded to 8th in 2:07.42.

That essentially sets up a six-way shootout for the win, with two swimmers each from Canada (Masse/Ruck), Australia (Seebohm/McKeown) and the U.S. (Baker/Smith) coming in with lifetime-bests under 2:07 and season-bests under 2:08.

Think you could be underestimating Seebohm. Anyway, we shall see.

The three at the top of the 100 are all legit, I’d say the best three in the world and arguably the three best in history. The six at the top of the 200 are good enough to maybe make this the deepest event at Pan Pacs. Just because we can only pick three medalist (and one winner) doesn’t mean we think poorly of anyone in the field.

Everyone in the field is going to break the WR. How can you not see this Jared

PVDH – I think it’s a given that they’re all breaking the world record. The deeper analysis needed here is that they’re all going to win the race. Not in a tie, each individually, faster than everyone else.

Baker took it out fast and opened a gap on Smith and Smoliga, and that was the difference in the race.

Masse is really good in the last 25 meters.

It’s going to be a pack of whirling arms coming down the stretch with 5 or more girls in the 58s or better.

Masse is gonna need to speed to challenge Baker. Baker was out .9 under Masses world record pace in Irvine