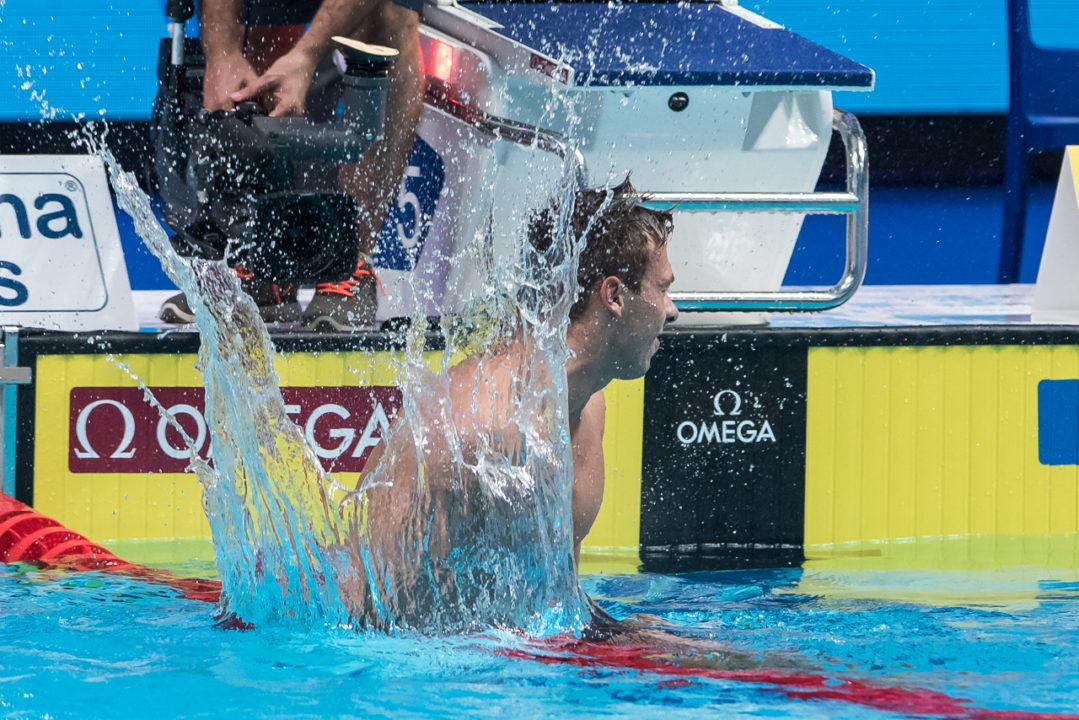 The reigning Olympic and world champion in the men's 1500m freestyle, Gregorio Paltrinieri of Italy, exerted his dominance over the field on night 2 of the 2018 Mediterranean Games. Archive photo via Peter Sukenik/www.petersukenik.com

Although Italy still has a very comfortable lead in the overall swimming medal table, several nations stepped up on day 2 to put some hardware counts on the board. With 1 day of swimming competition remaining, Greece jumped ahead of Serbia to hold the 3rd place position.

Greek athlete Christou Apostolos topped the men’s 100m backstroke podium, earning the gold in a solid 54.68. That gives Apostolos his 2nd medal after having won bronze yesterday in the 50m back. For Apostolos, his mark of 53.82 from Marseilles back in April remains as his season-fastest.

Greece picked up another gold in the form of Kristian Gkolomeev‘s win in the 50m fly. Gkolomeev fired off a speedy 23.53 to check-in with the 16th fastest time in the world. Abdelrahman Elaraby of Egypt touched in 23.69 for silver, just .05 ahead of Italy’s Piero Coda (23.74). Coda won the men’s 100m fly gold medal on night 1.

Egypt’s Farida Osman fired off a new meet record in the women’s 50m fly, clocking 25.48 to represent the only swimmer under the 26-second threshold. She won this same event at the 2013 edition of these Games. Touching the wall in 26.21 was Italy’s 100m fly winner from last night, Elena Di Liddo, while France’s Marie Wattel claimed bronze in 26.48.

There was a surprise winner in the men’s 100m freestyle, as Ossama Sahnoune of Algeria surged to the wall first in a new national record. The 25-year-old touched in 48.00, a mark which overtook his own previous personal best and NR of 48.33 set at last year’s World Championships, His time in Budapest fell just short of making the final, positioned as 9th after semi-finals.

Remarkably, Sahnoune’s time now situates him as the 6th fastest swimmer in the world this season, ranking above the likes of Scotland’s Duncan Scott, South African Chad Le Clos and Olympic champion Kyle Chalmers of Australia.

Sahnoune proved too fast for the Italian duo of Alessandro Miressi and Luca Dotto who rounded out the top 3. Miressi earned a silver medal in a time of 48.56, while Dotto collected bronze, just as he did in the 2013 version of these Games, in 49.20.

After a quiet night 1 in which she finished with a silver medal in the 800m free while settling for 7th place in the 400m IM, Spanish flag bearer Mireia Belmonte cranked out a big 2:11.66 to win the women’s 200m IM handily this evening. Leading from start to finish, Belmonte easily held off Turkish athlete Viktoria Gunes, who touched in 2:13.19 for silver. Italy’s Anna Pirovano was 3rd in 2:13.21.

Belmonte’s outing tonight was just slightly off the 2:11.31 registered at the Malaga Open this Spring, a time that sits as 15th among the world rankings this season.

Another Spaniard earned gold tonight in the form of Jessica Val. The breaststroking ace upgraded her silver medal from 2013 to a 100m breaststroke gold tonight, finishing in a new meet record time of 1:07.19. Italy’s Arianna Castiglioni opened with the fastest first 50, splitting 32.09 to Val’s 32.33, but couldn’t hold on and settled for bronze in 1:07.85. Splitting the two was Spain’s Maria Garcia, who captured silver in 1:07.58.

Perhaps the swim of the night, however, belonged to Italy’s Gregorio Paltrinieri, the reigning Olympic champion and world champion in the men’s 1500m freestyle. Already having registered an elite time of 14:50.35 at Italy’s Spring Nationals to entering this meet ranked 4th in the world, the 23-year-old attacked his race in Tarragona, crushing a new season-best of 14:46.25.

His effort tonight would have slid into the bronze medal position in Budapest and rockets the Italian up to #2 in the world rankings only behind Germany’s Florian Wellbrock who notched 14:40.69 in April.

@Loretta
Florian Wellbrock was in Sweden when he went 14:40 but he is German