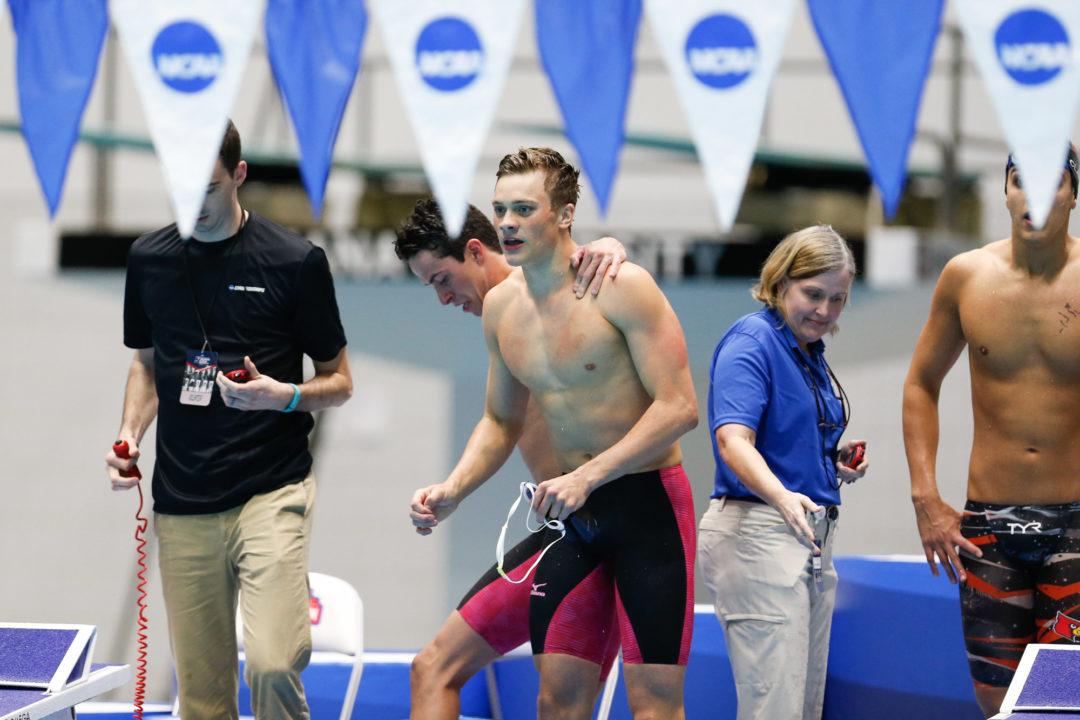 A fully healthy and on-form Shebat would be a slight favorite to win this race, but with questions looming about his injury, it brings him back to the field. Archive photo via Tim Binning/TheSwimPictures.com

Cal’s Ryan Murphy has left his mark on NCAA backstroke, and while he was off of his best times at last year’s NCAA Championships, he still slid under 44 seconds in the 100 back and took the national crown. 2nd last year was Texas standout John Shebat, who clocked a 44.35 as a sophomore in last year’s final.

Shebat was tabbed the early favorite for this year’s national title, but missed a string of dual meets late in the regular season with an injury. He still came back at Big 12s with a 45.76 in this race, which qualified him for NCAAs, and he currently sits 14th in the country. A 45.76 is well off of his time from last season, but we all know better than to doubt an Eddie Reese NCAA taper, and Shebat has proved his worth. His missed meets and the undisclosed injury that he’s been dealing with do make this a cloudy prediction– but what’s the fun in predicting a race with a clear favorite?

Three relatively new faces come into play this year– NC State sophomore Coleman Stewart, Grand Canyon junior Mark Nikolaev, and Indiana freshman Gabriel Fantoni. Stewart was as fast as 45.73 at NCAAs last year, where he qualified for the B final, but he’s seriously upped his game, registering a 44.54 to win the ACC title in February. Maybe more importantly, Stewart managed to get faster from ACCs (where he went 45.99, discounting a 45.6 time trial in an empty pool) to NCAAs (where he went 45.73).

Nikolaev joins Stewart under 45 (they’re the only two swimmers under 45 this season so far) at 44.71, and this year he was GCU’s very first NCAA D1 individual qualifier, as this is GCU’s first season in Division 1. Fantoni, a freshman at Indiana, sits third nationally with his 45.17.

A fully healthy and on-form Shebat would be a slight favorite to win this race, but with questions looming about his injury, it brings him back to the field. This year’s new faces, along with the more experienced backstrokers who return from last year’s A final, will make this one of the most exciting and competitive races this week.

UGA sophomore Javier Acevedo is fourth this year with a 45.26, followed by two USC backstrokers and then two more freshmen. Trojan first year Robert Glinta (45.29) and Ralf Tribuntsov (45.32), a senior, are right there in 5th and 6th. Next are freshmen Austin Katz (45.34) of Texas and Nick Albiero of Louisville (45.42).

It’s Glinta’s first season in yards and he’s excelled– meanwhile, Katz and Albiero have both seen big drops in their first collegiate seasons after enjoying a couple of years as heralded high school standouts. Tribuntsov brings in a lot of experience, and he was 44.76 last year at NCAAs. In fact, Tribuntsov is one of just four returners from last year’s A-final, as half of the field graduated. Besides the Trojan and Shebat, just NC State senior Andreas Vazaios and Alabama senior Luke Kaliszak are back. Vazaios (45.63) and Kaliszak (45.68) are seeded 12th and 13th, respectively. Vazaios was 45.26 at NCAAs last year and Kaliszak was 44.91.

Arizona State sophomore Zach Poti (45.43) and Utah senior Paul Ungur (45.52) have enjoyed successful seasons thus far, and after their women’s team had a strong showing at NCAAs, UVA sophomore Joe Clark will vie for an A final appearance as the 11th seed (45.54).

DARK HORSE: Senior Anton Loncar of Denver. As a junior last year, he was the highest mid-major finisher with a 45.40 to touch 2nd in the B final and 10th overall. His 45.92 this season ranks him 18th in the country.

I hope Shebat can show up when it matters. Such a great season last year, but he’s been very disappointing thus far. Prove all of the haters wrong, Mr. John Shebat!

I agree. I think Katz will A-Final as well, but he’s certainly a much stronger 200 backstroker than 100.

Though I would love for NC State to have an event winner in Coleman…I feel Austin will have developed his speed so much this year that he could get the Gold.

In Florida, he trained distance and was a 400 IM, 200 Back machine. I think at Texas he is being utilized in the sprints more.

Vote Up1-5Vote Down Reply
Am I right? Or am I right?

Austin Katz is from Sarasota, Florida… his club team focused more on distance swimming. I believe they are taking about the right brother.

You are absolutely correct!

Cal’s gonna get killed in backstroke this year…..weird.

especially because they recruited two of the nations top backstroke prospects

Thats what makes it extra funny.

Could see Katz and Carr, both freshman from the top 2 schools in this A final. I think Carr will come up big for Cal and they need him to

If cal was focusing this year the same way people suspect Texas to have focused then we could see big swims from all the bears come Wednesday. Carr is going to need to make a significant jump given the depth of the field, not impossible but it does raise concern that he is seeded as far down the list as he is.