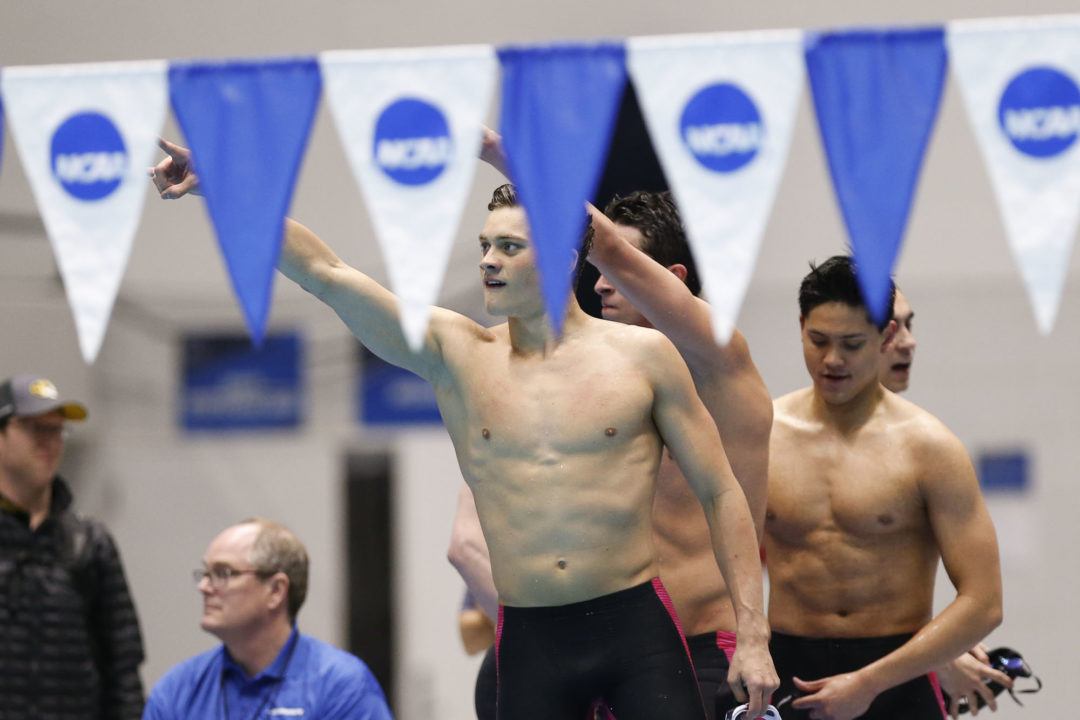 6 different programs have season-best composite times that add up within a second of one another in an event that could turn the tides of the entire meet. Current photo via Tim Binning/TheSwimPictures.com

Arguably, the Texas Longhorns’ current run of domination really got rolling  three years ago when they won the 400 medley relay to cap off the first night of NCAAs.  Sure, they’d already won the 200 free relay and the 500 free earlier that evening, but it was the epic come-from-behind victory over the Cal Bears that showed that Texas had come to play.  They followed that up solid victories the next two years, with Cal coming in 2nd both years.  However, Texas has lost Will Licon on breaststroke and Jack Conger on free, and Cal has lost Ryan Murphy on backstroke, while other teams have improved, meaning that this event is much more wide open that it has been in years.

To give you an idea of just how close this event is, here’s a comparison of what we could find for the best times (either flat or relay start) by the likely swimmers of six different teams:

The Indiana Hoosiers sit at the top of the psych sheet, thanks their 3:01.30 from the Big Ten Championships that’s one of the fastest times ever.  Ian Finnerty, Vini Lanza, and Blake Pieroni all return from last year, while backstroke, up to now their weak leg, relatively speaking, was shored up by the arrival of Gabriel Fantoni, who’s been 45.17 this year.  With a time that’s over two seconds faster than any other team’s this season, it’s very tempting to go ahead and pencil the Hoosiers in as the favorite here.  But, last year they were also seeded 1st, then their middle two legs swam a combined one second slower at NCAAs than they did in February, and that, along with other teams substantially improving on their seed time, saw Indiana end up finishing 6th.

The next-fastest time this season belongs to the Cal Bears, who swam 3:03.01 at Pac 12s. As we mentioned, they also loss a substantial piece in Ryan Murphy.  Once a strength, the backstroke leg now becomes the Bears’ weakest leg, with freshman Daniel Carr‘s best time of 45.93 about two seconds slower than Murphy’s time over the past few years.  Another freshman, Ryan Hoffer, went 45.58 over two years ago as a high schooler, but we haven’t seen him swim backstroke much at Cal this year.  Relay options abound for Dave Durden: either Connor Hoppe or Andrew Seliskar should go sub-51 on breaststroke, with Seliskar swimming the leg at Pac 12s, but Hoppe handling it the past two year at NCAAs.  Matthew Josa has split 44 multiple times on butterfly, although Justin Lynch is available as well.  Michael Jensen anchored last year, but the aforementioned Lynch or Hoffer should also be able to give Cal a 41-low leg.  Any of those arrangements should easily put the Bears into the 3:02-low range, with, a sub-3:02 swim certainly possible, and maybe even likely.

The 400 medley is the relay that NC State has tended to emphasize the least at NCAAs over the past few years, but Ryan Held‘s swimming this at ACCs this year could signal a shift in strategy.  The Wolfpack’s seed time of 3:04.24 from ACCs included Andreas Vazaios over Coleman Stewart on backstroke, but Stewart had a breakout meet at ACCs, ripping a 44.53 in the individual event.  Newcomer Jacob Molacek is a former national high school record holder in the 100 breast, Held is a sub-45 butterflier, and Justin Ress split an eye-popping 40.87 on the 400 free relay that set the American Record last month.

Florida is another squad with plenty of options.  They used a lineup of Bayley Main, Caeleb Dressel, Mark Szaranek, and Jan Switkowski at SECs last month, where they combined for a 3:04.55 that puts them 4th on the psych sheet. Yet, they’re capable of a much faster time.  Freshman Michael Taylor went 45.53 at Florida’s Last Chance meet, which would be a substantial improvement on Main’s 46-high in the relay.  Dressel was faster his on record-setting flat start, and Switkowski has been a bit faster on free.  Remember that Dressel now holds the American Record in breast, fly, and free, and Szaranek and Switkowski are so versatile that Gregg Troy could certainly do some mix-and-match here.

Southern California took 4th place last year with a 3:02.20 effort, and return all four swimmers this year.  There’s a little uncertainty, as Robert Glinta could replace Ralf Tribuntsov on backstroke, and Carsten Vissering spent a the first part of the season studying abroad.  Still, you should expect solid performances from the front half, and with Olympians Dylan Carter and Santo Condorelli holding down the back half, there’s no reason the Trojans shouldn’t be right around the same time as last year: they’re seeded 5th at 3:04.95 and last year they were seeded 9th at 3:04.51.

For the want of a breaststroker…
the  title was lost

Okay, so that’s not how the old saying goes, but it could be the story for the Longhorns this year.  Last year, Will Licon ripped a 49.75, one of the fastest splits ever, but with Licon out of eligibility, Texas doesn’t have anyone who’s been within two seconds of Licon’s time.  Senior Austin Temple did break 52 on a relay start as a freshman, but hasn’t made NCAAs, or come close to that split, since then.  From Meet Mobile and Texas social media, it appears that the Longhorns are bringing along junior breaststroker Casey Melzer as an uninvited relay-only swimmer.  Melzer’s best flat start is just under 53, and he split 52.50 at last December’s Texas Hall of Fame.  That’s a 2.75s difference, while Cal was only 2.29 seconds behind last year.  Still, the rest of the Texas squad is strong enough that there is a chance that the Longhorns could overcome that gap.  While John Shebat sat out several meets this year with an injury, he went 44-mid in the backstroke last year.  Joseph Schooling split 43.6 on the fly leg last year after splitting 43.3 in 2016.  Tate Jackson broke out with a 41.27 in the 100 free at Big 12s last month, while veteran Brett Ringgold split a 41.23 on the 400 free relay while appearing to be unshaved.  Even if Shebat is off, some combination of a slight drop by Melzer, Schooling matching his best time, and Jackson or Ringgold going 41.0 could keep Texas in the running to defend their title in this event.  They’re currently seeded 9th with a time of 3:05.71 from the Big 12 championships.

One of those six teams is almost certain to win, but there are several other times that will vie for a spot in the championship final.  Texas A&M, Louisville, and Virginia all are seeded with 3:05s, all teams had impressive conference championship meets, and all of their women’s teams had great meet at last week’s NCAA championships.  Stanford is only seeded 10th, but returns all four swimmers from last year’s squad that finished 7th at NCAAs.  Missouri is seeded 11th, and has looked better than expected after losing three swimmers from last year’s 3rd place team.

Darkhorse: You can’t count out any team that has a breaststroker who can go 50-mid, as does Tennessee in Peter John Stevens.  If he and the rest of the legs can match their best times, the Volunteers could find themselves right on the bubble of the championship final, or at the top of the consolation final.

Maybe one of the best relays of the meet. Definitely the one I’m most excited for.

Even darker horse pick: Grand Canyon. I won’t eat anything crazy, but I pick them to make the top 8. I also tweeted a while back that IU will win this event AND Ryan Held will split a sub 40 (because they won’t make top 8, will explain if it happens). One tweet has certainly aged better than the other one, but I still think all three predictions can come true.

What about the 800 FRR, they’re loaded with 200 freestylers and don’t need him.

I mean if he does put him on the 800 free relay, this is the relay that I think he would drop

They need him here. They got the A cut in the 400 FR without him midseason. Between Rooney, Baqlah, Szaranek, and Switkowski, I think they could make the A final in that one. If they use him in the 800, I’d leave him off the 4Free.