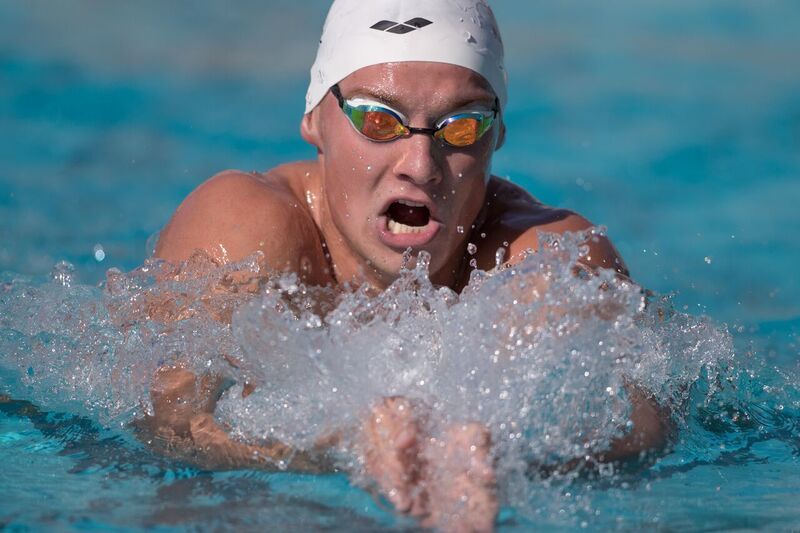 Swimming it for the first time at NCAAs, Andrew Seliskar is in the hunt for the 200 breast NCAA title. Archive photo via “Rafael/Domeyko Photography”

For the first time in six years, the men’s 200 breaststroke appears to be wide open heading into the NCAA Championships. In 2012, an Arizona freshman by the name of Kevin Cordes finished 3rd in an very tight final won by Louisville’s Carlos Almeida. After that he owned the event for two years, winning in both 2013 and 2014 by over three seconds. Heading into his senior year as the big favorite once again, Texas sophomore Will Licon pulled off a shocking upset to win the title by .05.

Licon then took over the mantle, dominating the event the next two years with emphatic wins by 1.2 and 3.3 seconds respectively, both in NCAA and American Record fashion. Now with Licon gone, there’s no clear favorite. And beyond that, half of last year’s A-final were seniors, and a total of 7 out of the 16 finalists. The door is open for someone to smash through and make a name for themself.

Looking back at our pre-season picks, there were two favorites heading into the year (though there was hardly a consensus): Carlos Claverie of Louisville and Mauro Castillo Luna of Texas A&M. Given they were the top two returning finishers from last season (Castillo Luna was 3rd, Claverie 5th), it made sense. However, they come into the meet seeded 5th and 10th, with plenty of big (and a few surprising names) above them. That being said, both men still have a chance, but so do a lot of swimmers.

Castillo Luna is likely being overlooked with new and interesting names atop the rankings such as IM specialists Andrew Seliskar and Mark Szaranek, but the Aggie senior has consistently dropped time from SECs to NCAAs each of the past two years, including going from 1:54.4 to 1:52.0 last season. On top of that, this year at SECs he was 1:52.1, making it look like a 1:50 is in the cards for him.

As for Claverie, he’s also consistently improved from conference to NCs, but the drops have been minimal. Unless he’s saving something big this year, his ceiling looks to be around 1:52-mid, which will get in the A-final for sure but won’t get him the title.

Seliskar and Szaranek will swim this event for the first time at the NCAA Championships. Seliskar, who was 1:52.2 in high school, has opted for the 200 fly in years prior, but after putting up an impressive 1:53.05 at the Georgia Invite, dropped a 1:51.30 at Pac-12s to solidify his spot as a threat in this race. In both his freshman and sophomore seasons he consistently dropped time from Pac-12s to NCAAs, putting him in the conversation to go 1:50.

Szaranek has a much smaller sample size in this event, swimming the yards version of the event only four times heading into this season (with a best of 2:01.96). Finally cracking the two minute barrier at the Purdue Invite in 1:55.7, he unloaded a 1:51.86 in February to win the SEC title over Castillo-Luna. Indications from SECs (from interviews, not quality of swimming) show the Florida men, specifically the seniors, didn’t taper much and are saving everything up for a big NCAA showing. After stepping up and tying Licon for the 200 IM title last season, he’s proven to swim big when it counts and has a legitimate shot at the title.

Though some of these guys have a shot to hit 1:50 (or lower) at NCAAs, only one man in the field has ever gone the time. Indiana junior Ian Finnerty exploded for a massive personal best at Big Ten’s in 1:50.78, knocking nearly four seconds off his best time coming into the meet of 1:54.43 (he was also a PB 1:53.22 in prelims). Finnerty has added from Big Ten’s to NCAAs in all six of his events throughout his first two years of college, making him a skeptical pick to be in the mix for the win. That is especially true in the 200, where he’s added an average of about 4 seconds from conference in his two NCAA swims. Even if he adds two seconds he’ll be in the A-final, but we’ll need proof early in the meet that he’s on form before we put him any higher than that.

Along with Finnerty, the Big Ten showed some great depth in this event with six different swimmers cracking the 1:54 barrier. Minnesota’s Conner McHugh unloaded a big best of 1:51.41 to sit 3rd in the country, while Finnerty’s Hoosier teammate Levi Brock had an unbelievable breakout meet to take 3rd in 1:52.78, knocking over four seconds off his best and qualifying for his first NCAA Championships as a senior. It’ll be hard for them to go much better after such big drops, but equalling their times should get them in the A-final. Joining them sub-1:54 was the Michigan trio of Jacob Montague, Tommy Cope and Charlie Swanson. Montague got a second swim as a freshman last year, placing 11th, while Cope got all the way down to 1:52.9 in prelims at Big Ten’s for a big best time. Montague and Cope will be in the fight for an A-final slot, while Swanson, primarily an IMer, should make the consols.

Purdue senior Marat Amaltdinov was the Big Ten champ last season and 7th at NCAAs, but was just 8th at conference this season. He’ll need to get back down into the 1:52s, which he was twice last year, in order to get back in the A-final.

There are plenty of others in the mix, including last year’s 6th place finisher Nils Wich-Glasen of South Carolina, Cornell’s Alex Evdokimov who was a consolation finalist last year but landed a big best at Ivy’s, and up-and-coming Louisville freshman Evgenii Somov. Jonathan Tybur of Texas A&M, Caio Pumputis of Georgia Tech and James Guest of Georgia are also right there having all been 1:53-mid this year.

Darkhorse: Though Alex Evdokimov did drop a personal best of 1:52.28 at the Ivy League Championships, he added a bit of time at NCAAs last year. He’ll be right on the cut line for the A-final.

Ian Finnerty has a PB and Seasons best of over half a second or more above the rest of the field and hes not even predicted to get Bronze?

I think Finnerty will be dangerous this year. He was always a speed guy and didn’t have a great 200. Now that’s changed in a major way, which makes him a different swimmer this time around. It will be interesting, but Licon’s record is safe.

explanation for that is in the article

Those two sentences plus this one took me roughly 15 seconds combined to type.

Wait, SwimSwam has articles? I was always under the impression the site was just a collection of headlines with comment sections underneath?

Just look ag Finnerty’s past NCAA results and you’ll understand. He has added quite a bit of time each year but hopefully he won’t this year.

Must be very frustrating for him…perhaps he need not shave for Biggie 10s NEXT YEAR.

Why isn’t Ian Finnerty faster??? I assume Finnerty has FINS, because this is Animal Planet, right? I haven’t been this disappointed since I read an article about Caeleb Dressel, and there were NO wedding dresses!

44
-4
Reply
Sccoach
Reply to  JP input is too short

8
-10
Reply
The Dressler
Reply to  Stankgal

I understand we all like Dressed here. But come on. I mean Farris is in a different league let’s not kid ourselves.