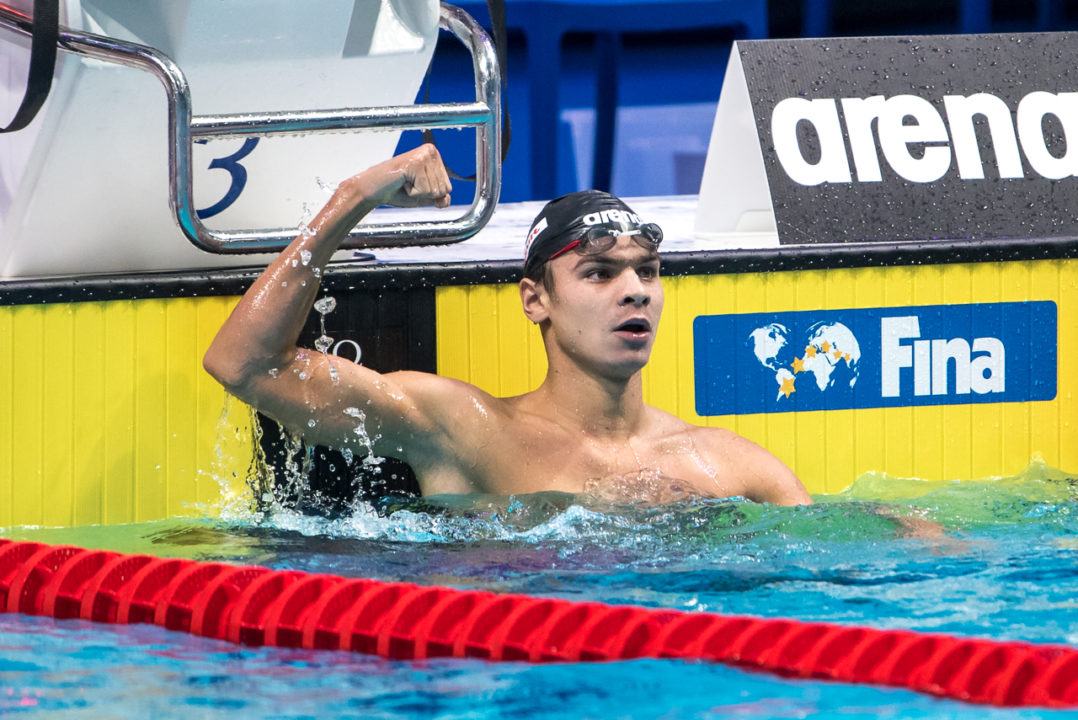 Evgeny Rylov is the reigning World Champion in the men's 200 backstroke. Archive photo via Peter Sukenik/www.petersukenik.com

It’s safe to say that no one stroke is dominated by a single country as much as the Russian men tower over the field in the men’s backstroke events at the upcoming European Championships.

They only had one male backstroke medal at last summer’s World Championships, where Evgeny Rylov won the 200, but their depth in the events worldwide is one that can only be challenged by the United States. No European country comes close.

So far in the 2017-18 season, six of the top eight Europeans in the 50 back are from Russia, same with five of the top seven in the 100, and while it lacks the depth of the other two, they still hold the top-2 in the 200, including the reigning World Champion.

Similar to the Pan Pacific Championships, where a country can enter any number of swimmers in an event but only two can swim the A-final, there can be up to four entries per country in an event at Euros, but only two can advance out of the preliminary heats. That sets up a bit of a domestic preliminary battle between the Russian athletes to ensure they advance.

Rylov is the undisputed favorite in both the 100 and 200, having been the fastest European both this year and last in the events.

The 21-year-old surprisingly didn’t swim the 100 individually last summer in Budapest after taking 6th at the Olympic Games in Rio, but did lead off the Russian medley relay in a time that would’ve been good for 4th (52.89). This year he threw down a personal best of 52.67 at the Russian Championships in April, where he got by a stacked field that included Kliment Kolesnikov (52.97), Grigory Tarasevich (53.48) and Nikita Ulyanov (53.60).

Those will be the three that join Rylov in the event in Glasgow, as they hold down the 1st, 2nd, 3rd and 6th seeds. Kolesnikov, just 18, poses the biggest threat to Rylov for gold, having broken the SCM world record back in December.

Also a contender in the 100 is Romania’s Robert Glinta, who’s coming off a successful freshman year at USC. After missing the 2017 World Championships due to medical issues, he’s been on fire in 2018, winning an NCAA title with the Trojans in the 200 medley relay, recording a 5th place finish individually in the 100 back, and then this LC season has posted lifetime bests in both the 50 and the 100. He comes in ranked 3rd (this year) in the 100, and would have to be the favorite for bronze (especially with #4 Tarasevich and #6 Ulyanov not likely to make it out of the heats). His countryman Daniel Martin had an impressive showing at the European Junior Championships, getting down to a 53.50, but won’t compete here. Other entered swimmers sub-54 this year include Apostolos Christou of Greece, Kacper Stokowski of Poland, Thomas Ceccon of Italy, and Shane Ryan of Ireland.

In the 200, there’s a little more of a gap from Rylov to the field.

After winning the World title last July in a new European Record of 1:53.61, he’s already been within a tenth of that with his 1:53.71 in April. Kolesnikov comes in ranked 2nd this year with a 1:55.83, and knocked his junior world record down to 1:55.14 in Budapest to take 4th at Worlds, but no one’s touching Rylov here.

There are a host of others who can challenge Kolesnikov for silver. Poland’s Radoslaw Kawecki is the three-time defending champion, and has consistently performed on the world stage with a pair of LC World Championship silvers in the event and three straight SC World titles. Lithuanian Danas Rapsys got into the final in Budapest with a lifetime best of 1:56.11, and is the third fastest on the continent in 2018 with a 1:56.84. Christian Diener (GER) and Matteo Restivo (ITA) are also under 1:57 this season, and Adam Telegdy (HUN) and Hugo Gonzalez (ESP) were last year.

With Rylov not swimming the 50, Vladimir Morozov takes over his spot as the 1A to Kolesnikov’s 1B in that race. He broke the Russian Record in April in 24.35, and Kolesnikov wasn’t far behind in 24.46. The Russians are set up well to go 1-2 in all three back events, with Kolesnikov the likely runner-up in all of them. Though, like the 100, this one could go either way. They will have to deal with Sergey Fesikov and Ulyanov in the prelims though, who are the 4th and 5th fastest Europeans this year at 24.79 and 24.83 respectively.

Trailing them is Glinta, who went a best of 24.78 this year, along with Frenchman Jérémy Stravius (24.85) and Diener (24.98). Looking at times from last year, Ryan, Apostolos, Israel’s Jonatan Kopelev and Hungary’s Richard Bohus are also in the mix having been sub-25.

Wouldn’t count out Ryan in the 50. He looked very strong at the Irish trials and didn’t swim the 50 there. He could really challenge for a minor medal. Also wouldn’t sleep on Ireland’s Connor Ferguson, he’s been 25 a few times this year and with a well timed taper could make either of the 50 or 100 back finals.