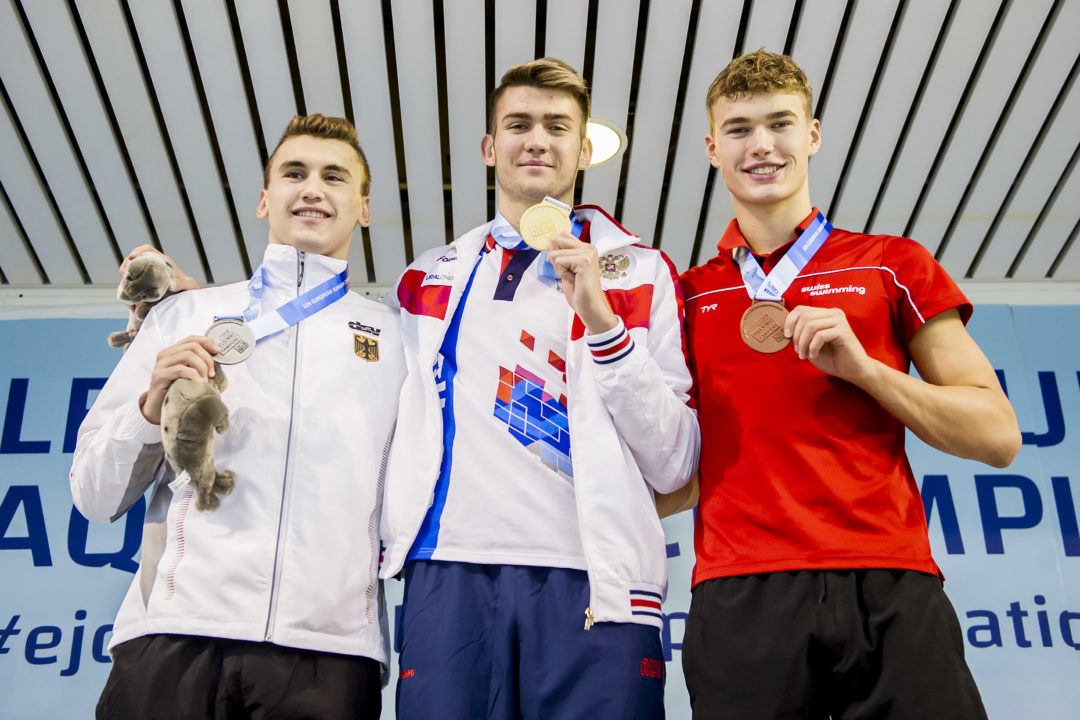 Russia’s Kliment Kolesnikov broke two Championship records on day 4 en route to win a pair of gold medals. The 17-year-old set a new best mark in the 50m backstrok with a time of 24,52 and also improved the meet record in the 200m backstroke to 1:55,83. Kolesnikov improved his season-best of 1:55.91 from the Russian Championships, moving up one spot to 5th in the world rankings.

Sweden’s Björn Seliger took the top seed for the semi-final in the men’s 50m freestyle, clocking 22,68. With his personal-best time of 22,33, he also was on top of the start list coming into the meet. The aforementioned Kolesnikov qualified through to Sunday’s semi-finals in 22.68 (the semi-finals and finals will both be swum in tonight’s session as book-ends to the individual events).

15-year-old Anatasiya Shkurdai touched the wall with the fastest time in the women’s 50m butterfly. The Bulgarian was clocket at 26,84 (personal-best: 26,35). She is also the youngest swimmer who made it into the 50m fly semi, another race where both semis and finals will be raced in the same session.

At Olympic Games, the exhausting 400m IM are swum on the first day; the young European men had to handle it on the 5th day of competition. Russia’s Maksin Stupin set the fastest time in the heats, clocking a 4:20,67. His lifetime-best was recorded with a 4:16,90 at the 2018 Russian National Championships.

The Russian women again lead the field with the fastest time in the 4x200m freestyle relay, posting a 8:10,91. They were followed by Spain an Germany.

The German men swam the fastest time in the 4x100m medley relay, ahead of Italy and Russia. The German and the Russian team are the most successful relay swimmer so far at this Championships:

Milak won 200 free and 100 fly wire to wire within 15 minutes on the last day. Unbelievable!

He will be even better at Euro Champs… 1.47.1/51.7 double a few minutes apart is mad at any age… he just did it as a teenager without a full taper!!

Just watched the medal ceremony. Kesely went 1:57.75 in the 200 free relay anchoring the team to the top. That will be fine in Glasgow, too.