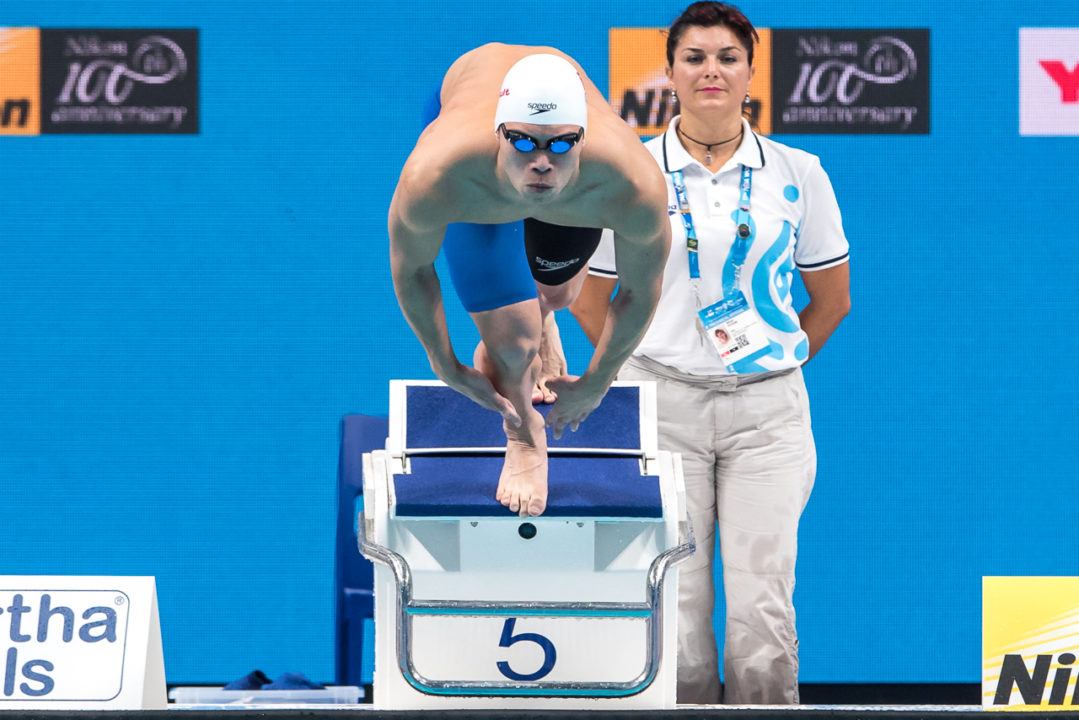 Li Zhuhao powered himself to a sub-51 split on the fly leg of the Chinese medley relay, giving the nation a new continental record en route to gold. Archive photo via Peter Sukenik/www.petersukenik.com

While competing in the final event on the final day of the 2018 Asian Games, the Chinese men’s 4 x 100m medley relay scorched a new Games Record, Chinese National and Asian Record to cap off a historic meet in Jakarta. The foursome of Xu Jiayu, Yan Zibei, Li Zhuhao and Yu Hexin combined for a speedy effort of 3:29.99 to overtake the previous Games Record of 3:31.37 held by China, as well as the 3:30.19 Asian continental record held by Japan.

Below are the comparative splits between the previous Asian Record and this new sub-3:30 swim by China.

The backstroke legs were fairly similar between the old and new mark, separated by just .20, but the disparities grow from there. Yan’s breast was actually slower than Koseki’s, but Li’s fly split dipped well under the 51-second barrier.

For the old Asian Record holders of Japan, they, too, cracked off  a new National Record with their silver medal-garnering effort of 3:30.03. The combination of Ryosuke Irie (52.53), Yasuhiro Koseki (58.45), Yuki Kobori (51.06) and Shinri Shioura (47.99), too, dipped under the old Asian mark while also clocking a shiny new Japanese National Record. This was the same foursome of swimmers who originally notched the previous Asian Record at the 2017 World Championships and tonight, they lost to China by just .04.

Only Japan and China have won this event at the Asian Games, with tonight marking China’s 3rd victory since the competition’s inception. Japan has won on the 13 other occasions.

How about Japan losing this race at Pan Pacs and at the Asian Games by a combined 0.09 seconds.

U.S. needs to bring it’s A game and nothing less to Tokyo. Rest of the world is catching up.

Dressel was obviously not at his A game

Agreed, but even with Dressel at 100%, that doesn’t leave a lot of breathing room with the Chinese, Japanese and British. Imagine if the British produced a 52 backstoker. That could put them in the 3:27-3:28 range

Nick Pyle’s still a Junior and went 54 mid this year.

U.S. needs a 58 in the 100 breast again, and a 58 that performs that way on relays (looking at Cody Miller 2016). I have faith that in 2 years there will be someone capable of doing so because the men’s breaststroke events have gotten so competitive. The U.S. also has a huge group of 100 freestylers coming in that could push someone back down to 47 mid flat start, 46 high relay exchange.
China’s team is very young, so they could still see some big drops. GBR of course has a potential 56 low split from Peaty which is basically a 2 second gap on anyone else. Strong back half with Guy/Scott as well. They are a 52… Read more »

the breast part was not in a A game as well ……

Very likely that the breast leg is still not at its A Game at next year’s World Championships. And who will swim the free leg for US next year? Can 30-year-old Adrian do it again? Or can we trust Pieroni or Apple, whose consistency is still a questionmark?

Great Britain’s backstroke leg is a big problem. It’s difficult for Peaty, Guy and Scott to drop a large amount of time as they are already very fast. They need a good backstroker if they want to be more competitive in this event.
Russia can still make great progress in this relay since their backstroker and flyer are pretty young. But they should tell Chupkov not to swim 1.00 again or just put Prigoda in.
China and Japan are both very good, and it seems their swimmers can do better in relays than in individual events.
Their free legs are relatively weak, so the backstrokers, breaststrokers and flyers need to create a big advantage for the free… Read more »

Their (Chinese and Japanese) free legs are relatively weak?
It depends..: Yu Hexin for China was capable of a 47.38 in the 400 free relay and Matsumoto for Japan swam a 47.65.
Both young swimmers and both probably improving in next two seasons.
Considering the powerful Russia, Great Britain and Australia (and I’ve a dream about Italy, but some young talents must show their whole potential) the men 400 medley relay could be EPIC come Tokyo2020, and Usa have really great opponents.