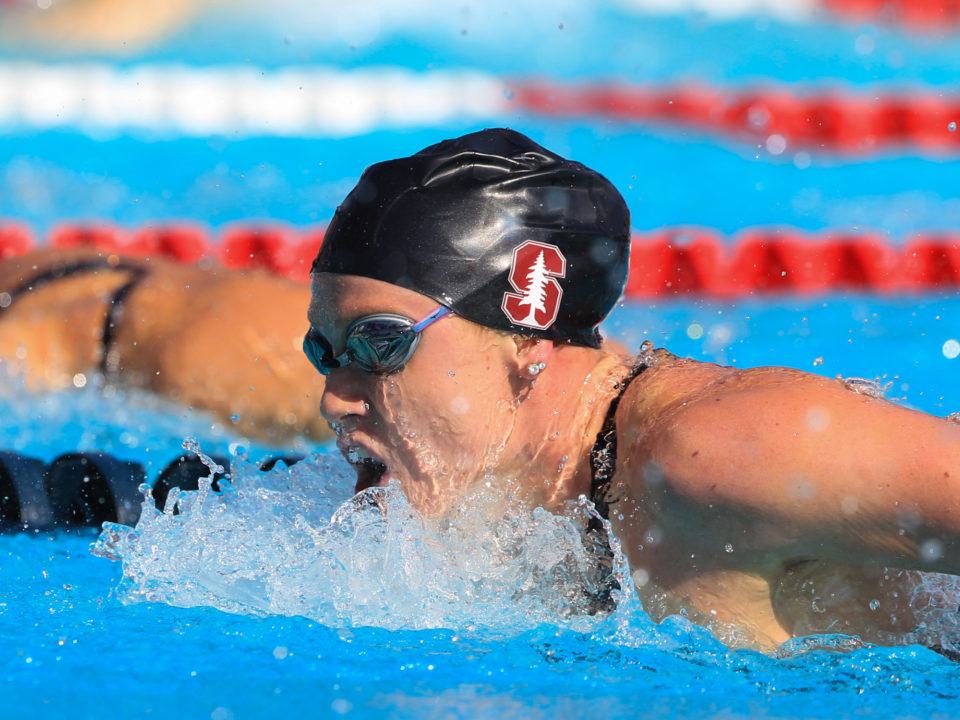 Ella Eastin and Stanford chase a third-straight NCAA team title. Who are the top challengers? A conference rival you probably saw coming and a couple more teams you might not have. Archive photo via Tim Binning/TheSwimPictures.com

The Division I NCAA swim season is underway, and that can only mean one thing: the return of SwimSwam’s Power Rankings!

We started this process with preseason ranks we published early in our College Preview magazine, then used to count down our College Swimming Previews series on the web. These rankings are a bit different, in that they average out the ranking ballots of five of our top college swimming reporters periodically throughout the NCAA season.

Stanford has won two straight NCAA team titles, and despite the losses of some huge names to graduation and/or the professional realm, they remain our consensus #1. Check out our full ranks below:

New staff is bringing great energy that wasn’t there before. The freshman class is sneakily good, and Valerie Gruest being back on the roster gives them a probable mile scorer to go along with big points from diver Olivia Rosendahl. -KO

Mizzou only graduates the freestyler from both scoring medleys. They’ve also got Annie Ochitwa, one of the best versatile sprint relay pieces in the NCAA. -JA

No individual scorers graduated, and Arizona had a great showing as a team at Summer Nationals. Factoring out seniors increases their returning points haul pretty significantly. And the relays mostly finished just on the wrong side of the scoring line last year – it won’t take much improvement to drastically change the Wildcats’ relay scoring output. -JA

We don’t have any idea what new coach Yuri Suguiyama‘s first year in Wisconsin will look like. But Beata Nelson is a pretty safe bet to put up big individual points and carry a couple relays. -JA

You can’t overstate the loss of sprint star Liz Li. But Freya Rayner is about as good a replacement as you can hope for, going 22.0/48.4 as a freshman. -JA

Yeah, the cupboard is bare on the men’s side, but don’t sleep on Auburn’s women, who return six potential scorers (when factoring out seniors). Aly Tetzloff could be one of the best (and least talked about) sprinters in the country. And Julie Meynen was so much better on relays (47.7 split) than she was individually (48.7, 27th place) that it’s fair to suggest she could well outperform her sophomore individual score. -JA

Injuries clearly wracked this team a year ago. But a healthy Ky-Lee Perry plus top-tier recruit Emma Muzzy, transfer Kay Sargent and Swedish breaststroker Sophie Hansson could mean a ferocious comeback for the hungry Wolfpack. -JA

When you rescore 2018 NCAAs without seniors, Kentucky returns the 10th-most points in the nation. That’s not a perfect predictor, but does show Kentucky’s returning strength. Asia Seidt keeps getting better and better. -JA

It’s tough to rank this group, which is powered by a highly-talented but unproven (at the NCAA level at least) freshman class. Is former #1 overall recruit Eva Merrell healthy? Just how many star freshman flyers will this program have? There’s a high ceiling, but a lot to prove for this group early on. -JA

We’re not going to know exactly what USC has until January, with top prospect Erica Sullivan sitting out the fall semester and a few other key pickups transitioning to short course yards. Transfer Courtney Caldwell could be a massive get, if she’s recovered after an injury-riddled season with NC State. -JA

One of the best diving groups in the nation, complemented by a great breaststroker in Lindsey Kozelsky and the support pieces to put together some outstanding medley relays. They’ll need a big year from the free relays (and to find a new butterflier), but there are big points to be had from this roster. -JA

Sure, the Wahoos graduated a lot of points and key relay legs from Caitlin Cooper and Jen Marrkand. But at what point do we start trusting coach Todd Desorbo more than the questions his team faces? UVA overperformed expectations by a country mile last season, and another top 10 finish in 2019 would only add to the growing buzz in Charlottesville. My head says I ranked Virginia where the numbers say they should be (12th). My gut says that’s too low, and I might be changing tunes in a hurry by our next rankings. -JA

If the medley relays hadn’t been a whirlwind of errors, Tennessee might’ve been 5th in 2018. Then again, they graduated their breaststroker, so its hard to project those medleys scoring what they hypothetically could have in 2018. Still, a year of experience in the spotlight is going to help this upstart roster. -JA

Lilly King is still the heart and soul of this team, and who can’t get behind that much confidence and swagger? Doesn’t hurt that she outsplits the entire nation by multi-second margins on the breaststroke leg of both medleys, either. Bailey Andison is an impact transfer. And the young additions to the sprint group (22.1/49.5 Ileah Doctor and 22.5/49.7 Julia Wolf) should pay dividends on relays. -JA

A&M graduated a lot, but they’ve already proven they’re a reliable program that creates NCAA scorers and doesn’t rely too heavily on a few top swimmers. They get the benefit of the doubt despite not returning a ton of points. -JA

Louisville was scheduled to return all 20 relay legs, before rising junior Rachel Bradford-Feldman was missing from the 2018-2019 roster. Mallory Comerford is one of 3 serious candidates for NCAA Swimmer of the Year (Ella Eastin, Taylor Ruck) -BK

The Longhorns have steadily built up a deep roster and their sprint-heavy freshman class is a boost individually and for relays. -KO

Our consensus #3 team, Michigan returns a very strong core and supplements with an internationally-accomplished freshman class. The Wolverines are well-rounded enough to have five great relays despite graduating key pieces. And Siobhan Haughey is next-level good. -JA

After Stanford’s Simone Manuel and Katie Ledecky turned pro early, Cal had an avenue to a 2019 team title. Kathleen Baker doing the same later in the summer made that road much tougher. -BK

Prospects look a lot different with Baker out of the mix, but Cal still has plenty of talent. Abbey Weitzeil could be the best sprinter and relay hero in the NCAA. Katie McLaughlin has been getting better and better since her 2016 neck injury. -JA

That graduating class (Manuel, Ledecky, Hu, Howe, Engel, Cook) should be downright roster-crushing. But for Stanford, it just means the best recruiting classes of the last several years have more opportunities to shine. 48.2/1:44.7/4:36.6 sophomore Lauren Pitzer has barely gotten any NCAA relay swims. 3:59 IMer/4:37 freestyler Brooke Forde was basically an afterthought on this roster as a freshman. Last year, Stanford was leaving 48-lows off their 400 free relay, 22-lows off their 200 free relay and a 1:40 off their 800 free relay while still winning all three. This is the best roster in swimming right now, and while there are a lot more question marks than a year ago, it’s impossible to pick anywhere else at the moment. -JA

Love these lists and would also love to see a ranking of college coaches/coaching staffs. Would be fun to see the experts’ picks!

Anyone know what happened with rachel Bradford-Feldman

I think they standing are sleeping on Georgia. I understand that it is relying on ALOT of new talent, but I couldn’t see themn outside top ten with all the top recruits and transfers. Eva is the biggest question but even discounting her you have the Dakota Luther,Oliva Carter, Madison H, Callie Dickson and the breastroke transfer. I mean I think they won’t loose any relays points if anything gain points in medleys and maybe the freestyle ones two. 1:44or 1:45 is Eva, Dakota and Olivia in the 200 free. Plus they have a few returns that can step up. Veronica burchill/Caityln C, whohas dropped massive time from highschool, really been stepping up and in addition to Courtney Harnish and… Read more »