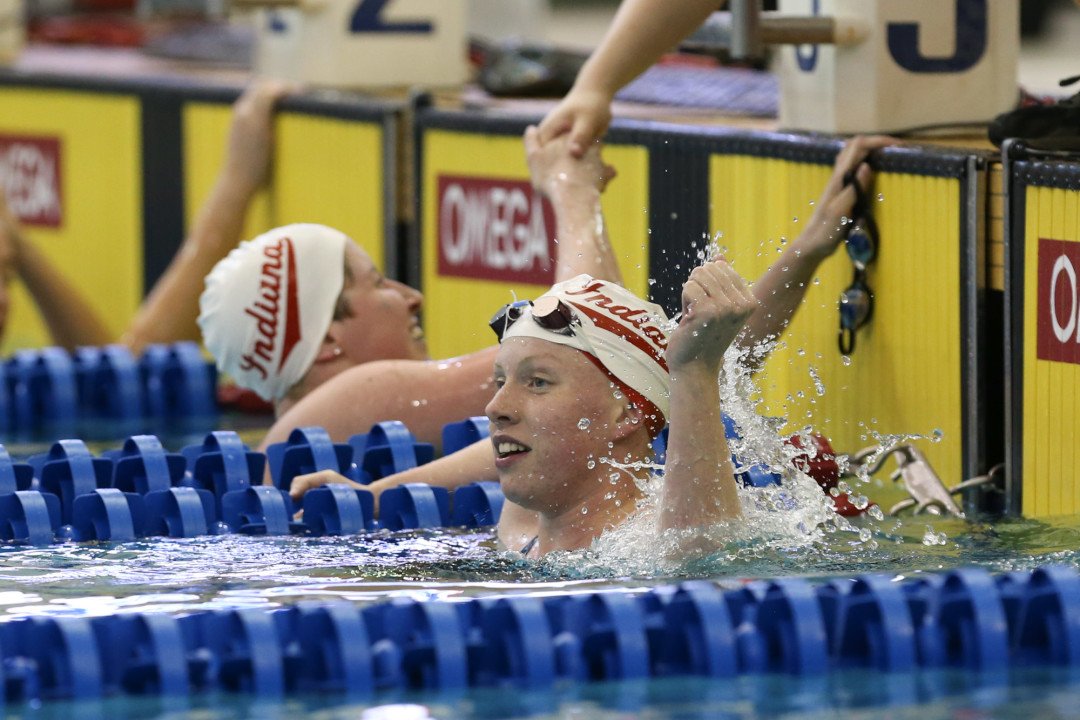 Indiana's Lilly King will be chasing her own records in tonight's 100 breaststroke final. Archive photo via Tim Binning/TheSwimPictures.com

The Big Ten Women’s Championships continue to bring the heat on a busy weekend in college swimming, with Lilly King breaking the first American record of the 2017 collegiate postseason. King went 56.30 to cut a half-second off her own American and NCAA 100 breast records.

Day 3’s Finals session at the 2017 Big Ten Women’s Championships will feature a record watch Indiana sophomore Lilly King. After breaking the pool record in prelims in 57.46, she’ll be chasing her 56.85 from last year’s NCAA Championships in finals. Remember that her 25.55 breaststroke split from Tuesday is half-a-second faster than she was on the medley relay at NCAAs last year, when she set that record.

After placing 2nd in the 100 fly at each of the last 3 Big Ten Championship Meets, Indiana senior Gia Dalesandro had her 100 fly breakthrough on Friday. There, she took the title in 50.45 to knock off defending champion Liz Li (50.90) and take the Big Ten Conference Record.

Dalesandro was out fast, and was the only swimmer in the field to split under 24 seconds opening. The time is also the fastest in the country this season, and is faster than anybody aside from the now-graduated Kelsi Worrell swam at NCAAs last season.

Ohio State’s Lindsay Clary made seniors 2-for-2 to start the session. She swam a 4:04.09, which is within half-a-second of her winning time from last year’s meet.

Ohio State will graduate Clary after this season, but the IM group remains strong for the Buckeyes. Meg Bailey took 4th (4:08.35) and Kathrin Demler took 5th (4:09.74) in the race.

Michigan sophomore Siobhan Haughey successfully defended her 2016 title to lead the 200 free, taking down conference and meet records in the process. Haughey was 1:42.49, cutting a half-second off her overall conference record from a year ago. She also broke her own meet record, swimming a full second faster than she was at this time last year. And completing the trifecta, Haughey took out the 1:42.84 pool record set by Olympian Allison Schmitt back in 2010.

Wisconsin’s Cierra Runge was second in 1:43.78, coming up with her second silver medal in as many days in her first year in the Big Ten. The former Cal All-American is turning out to be a huge pickup for Wisconsin, which runs 2nd in team points at the moment.

IU currently leads Wisconsin by 38 and Michigan by 54. Minnesota is 4th, 87 points out of third and only 20 ahead of Ohio State.

Indiana’s Lilly King came through once again with a massive 100 breaststroke swim, smashing American and NCAA records with a 56.30 and coming as close as anyone in history to the first 55-second 100 breast ever on the women’s side.

King, already the first-ever under 57, cut a half-second off her best time, which still stood as the Big Ten record of 56.85. Bear in mind that King was just 57.35 at this meet last year before cutting that half-second at NCAAs. King continues to break new ground in the breaststrokes and is the runaway favorite to win the NCAA title.

King’s swim overshadows what were two great swims by Minnesota’s breaststroke duo. Freshman Lindsey Horejsi was 58.90, a season-best and only about four tenths off her lifetime-best. Meanwhile Kierra Smith broke 59 for the first time ever, going 58.95 for third. The Gophers also had Rachel Munson (1:00.65, 7th) in the A final.

Michigan had Emily Kopas (59.54) in the A final and Wisconsin had Maria Carlson (1:00.36) as the top four teams continued to jockey for position. IU’s lead is down to 9.5 above Michigan. Wisconsin sits 3rd, 45 points out of the lead and 48 points ahead of Minnesota, with Ohio State falling back towards the field in 5th.

In one of the tightest races we’ve seen so far, Minnesota freshman Tevyn Waddell won the 100 backstroke over Michigan’s Clara Smiddy by just .02 seconds with a huge last lap.

It was a good event for freshmen, with Wisconsin rookie Beata Nelson going 52.18 for third place. Nelson was just .02 behind the leaders at the halfway mark and led the field with 25 to go. Wisconsin also got big points from Jessica Unicomb (52.63 for 5th), while Minnesota’s Zoe Avestruz placed 4th in 52.49 and Michigan’s Gabby DeLoof went 52.96 for 7th.

Indiana did have two A finalists, but lost their team points lead to Michigan. The Wolverines are now up 3.5 on IU, as the top two have put some distance between themselves and the field. Wisconsin is 42 points ahead of Minnesota for third.

Minnesota’s Yu Zhou won her second diving gold of the week and the 6th overall of her career. Yu swept the diving events last year and is a perfect 2-for-2 this season, scoring 413.65 on 3-meter to take gold. Yu also won 1-meter and 3-meter in her first season competing, 2014-2015. That means Yu is the three-time consecutive conference champ on both springboards and will go for another sweep on tomorrow’s platform event.

Minnesota had 3 of the top 4 finishers, with Sarah Bacon scoring 384.30 for third and Lexi Tenenbaum 378.95 for fourth. In the mix was Nebraska’s Anna Filipcic, who scored 387.35 and finished second overall.

A big point swing pushed the Golden Gophers up to third, ahead of Wisconsin by 31. Michigan still leads, expanding their margin to 12.5 over Indiana. The Hoosiers are 31 ahead of Minnesota with one event remaining tonight.

The Badgers went 1:27.90 to win a thrilling come-from-behind victory without even using their best swimmer on the anchor leg. Chase Kinney swam second for Wisconsin, splitting 21.47. Interestingly enough, Ohio State countered with the exact same strategy, using Zhesi Li second and getting a blazing 21.07 split. But Wisconsin still had Marissa Berg for the anchor. Berg – who was only 22.5 in the individual 50 free earlier this week – went Super Saiyan on the anchor leg, splitting a killer 21.97 to run down Ohio State and pick up the win for Wisconsin by .09.

Michigan was third overall with a 1:28.37. Siobhan Haughey was 21.77 and Gabby DeLoof 21.89 for the Wolverines, who head into the final day of action leading team scores by 14.5 over Indiana. IU was fourth in this relay at 1:30.41. Holly Spears split 22.3 on the anchor leg, and breaststroke superstar Lilly King was 22.6 to help out the relay.

Where is BSnoodgrass for IN this yr???? Thought she was bk from redshirting last yr??? I thought u saw her swimming some dual meets earlier in the yr???

She quit swimming??? She just tried to make OLY team I thought???

Conlict with Looze led to her early retirement. I can’t elaborate on the personal details. I hope she enjoys retirement and her future endeavors!

Who has the LD on Snodgrass???

Where is Hannah Burvill (Brit swimmer for IA)? She was actually doing well. Can someone explain to me how Mich St and IA have had the same coaches for 10-20 yrs, have never finished top half on women’s, and only finished top half a handful of times on the men’s side?