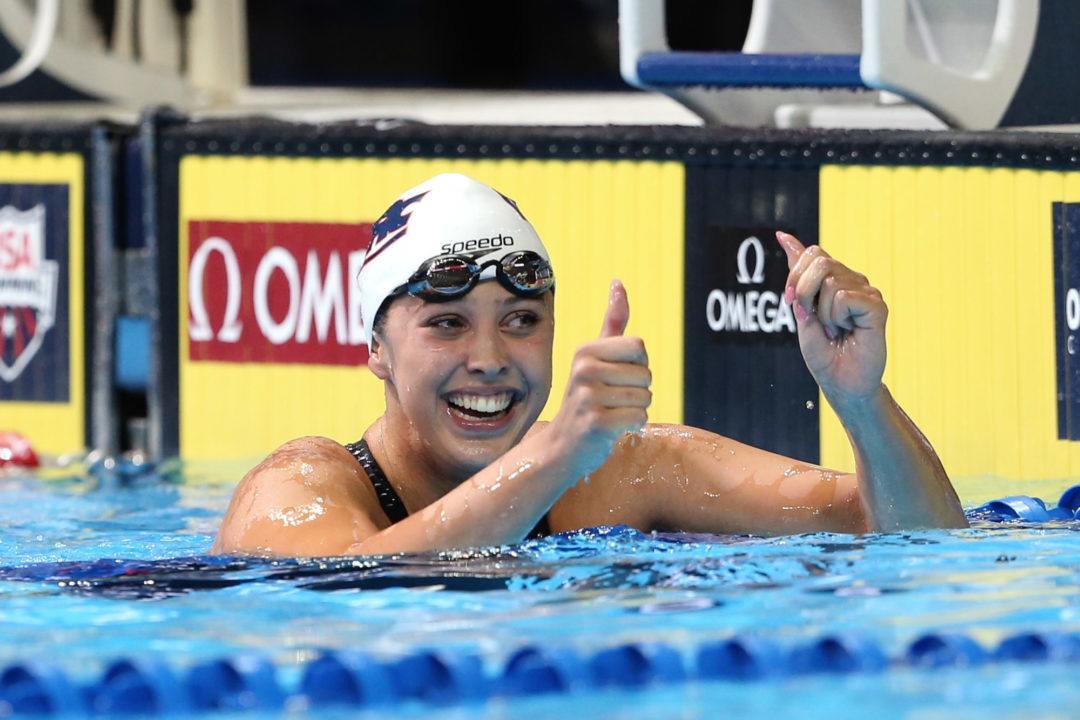 Coming in off her Olympic silver in the 100, Kathleen Baker is leading a wide open field of backstrokers jumping on a rare chance to swim the 50 LCM. Current photo via Tim Binning/TheSwimPictures.com

Wordplay aside, the three-year break traditionally offers a chance for a big breakthrough from a sprint-oriented stroke swimmer. Despite the historical success of American backstrokers, (notably Natalie Coughlin, Missy Franklin, Kathleen Baker, and Maya DiRado), the U.S.’s lack of focus on the 50 stroke events means the country isn’t quite up to standard in the world rankings. Natalie Coughlin’s LCM American-record 27.51 from 2015 only makes her the 14th-fastest swimmer in history. The 2017 World Championships represent a real chance for an American to step up and change the team’s reputation in the event.

Though she hasn’t swam the 50 since Rio, Olympic silver medalist Kathleen Baker is the swimmer to beat. Baker’s 28.28 50 split from her silver-medal 100 back performance in Rio would have been fast enough to win the gold at U.S. Nats in 2014. Her personal best is an untapered 28.18 from the 2015 Mare Norstrum – Monte Carlo.

Ali Deloof will put up a strong fight against Baker. Deloof hasn’t swum the 50 this year, but her 28.03 from the 2016 Charlotte Pro Swim makes her the 8th-fastest American in history. She is the swimmer with the fastest personal-best in the field.

Her personal best is a 28.3, but, by all accounts, the 50 back should hit the sprint/stroke sweet spot for Olivia Smoliga. Like most Americans, the new Georgia swimming alum has never had the chance to hone in on the 50 back. But her prowess in the 100 back combined with her sprint skill ought to combine for a lethal 50. Just two weeks ago, she put up a 28.44 at the Charlotte UltraSwim, missing her lifetime best (28.34, 2013 Charlotte Grand Prix) by just a tenth untapered. Importantly, Smoliga also had the quickest SCY relay lead-off at NCAAs this year, a 23.52 to outswim the entire field from the B final.

In a similar vein, Ally Howe of Stanford hasn’t swam the long course 50 back since 2015 (29.27). However, her Pac-12 100 back this February that destroyed a historic 15-year-old mark has proven her to be an absolute backstroke powerhouse. Her opening split on that swim was a 24.12 that would have held with most of the lead medley relay swimmers at NCAAs.

In April, rising senior Hannah Stevens of Mizzou put up a 59.40 to become the fifth-fastest 100 LCM swimmer in the world this year and the 10th-fastest American 100 swimmer in history. She hasn’t swum the 50 long course since 2014, but her April 50 split was 29.14 going out. That should translate to a quick 50 this week.

The fastest American swimmer this year is 19-year-old NC State swimmer Elise Haan, who went 28.43 in the 50 back at the Charlotte UltraSwim. That weekend marked her first time under 29, so she could be a real wild card coming into Nationals next week.

Also in the mix should be Cal’s Amy Bilquist and Clara Smiddy of Michigan. Smiddy was 28.68 at the Charlotte Pro Swim, and Bilquist’s 100 strength should translate to a finals spot in the 50.

It will also be interesting to see how 15-year-old age-group all-star Alex Walsh shapes up in the 50 back, an event she hasn’t swum in a year. Walsh, a high school freshman, went 52.8 in the 100 SCY back at Tennessee States this year.

Ariola may be a contender with her 28.9 from jr worlds in 2015 and her very recent progression in sprinting

Vote Up4-2Vote Down Reply
Don\'t Worry About it