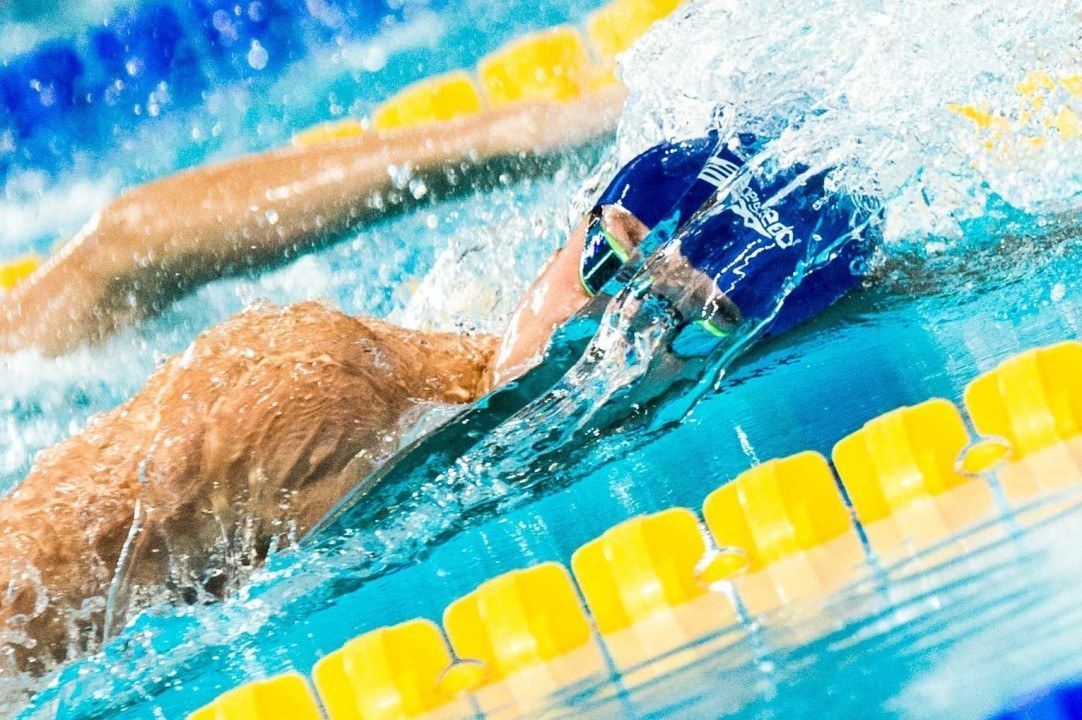 One of the prime events of these British Championships, the men's 200m freestyle, will see reigning world champion James Guy defend his title against Duncan Scott, Mark Szaranek and Max Litchfield, among several other contenders. Archive photo via Mike Lewis/Ola Vista Photography

Swansea’s Aly Thomas was able to successfully defend her 100m butterfly title, firing off a new personal best in the event. Prior to this meet, Thomas’ personal best sat at the 58.66 she rocked for the win at the 2016 edition of this meet, but she surpassed that already with her morning swim of 58.49.

Tonight, the now-7th fastest British performer of all-time dipped beneath the 58-second threshold in spades, stopping the clock at a mark of 57.85. Even with that fantastic swim, Thomas falls just .04 outside of the consideration mark for Budapest. But, her 2:07.87 200m butterfly silver medal-winning swim did fall under the consideration time in that event on day 3.

Isle of Man’s Charlotte Atkinson already scored the 200m butterfly and 50m butterfly victories, but threatened in this sprint race tonight up through the last 25m. Her morning swim of 58.55 already earned a new Isle of Man record and Atkinson outdid that swim with an even faster 58.22.

Bronze went to Atkinson’s Loughborough teammate Rachael Kelly. Although she fell down a spot from her silver medal from last year, she improved her 2016 time from 58.72 to 58.41.

Loughborough surged to amother top finish tonight, led by European Games champion Luke Greenbank and his mark of 1:57.67. Right behind was Joseph Hulme pumped out a new personal best to earn silver in 1:58.63. Both men improved upon their morning swims, but were well outside the British consideration standard for the 2017 World Championships.

For Greenbank, his string of 1:57-point swims is frustrating for fans who remember his 1:56.89 whopper of a race back at the 2015 inaugural European Games, a time he hasn’t been able to match since. Post-race, the 19-year-old stated that he was ‘disappointed’ with that time.

In what some may say was a surprise result, Siobhan-Marie O’Connor was denied her 2nd consecutive title in this race, with Sarah Vasey charging to the wall first by just .02 of a second. The reigning national record holder O’Connor had claimed the top seed in the morning with a swift 1:06.91 to represent the only sub-1:07 swim of the morning and dropped the 100m butterfly final to focus just on breaststroke tonight.

However, it was Loughborough’s Vasey who was able to hold on to her stroke against a tightening up O’Connor and just out-touch the Olympian to win in 1:06.78. That lays waste to her own personal best of 1:07.32 notched at the Luxembourg Euro Meet earlier this year, so quite the time drop for Vasey here in Sheffield.

But, as with Vasey’s, O’Connor’s time of 1:06.80 is also under the British consideration standard for Budapest and should be enough to get both women on the World Championships roster. For perspective, Vasey and O’Connor would have finished 6th and 7th, respectively, in the Rio final in the women’s 100m breaststroke with their swims tonight in Sheffield. Although, their times barely crack into the world’s top 10 this season.

The 200m breaststroke gold medalist here, Jocelyn Ulyett, who won that event in a new national record, touched in 1:07.24 in this 100m distance for bronze.

His starts and underwater are incredible. He came up head and shoulders ahead of Barrett who isn’t a slouch on the start.

Third fastest textile time ever I thinks. Govorov has competition

First time of the week I’m watching the live stream. Great quality and free. If French swimming could do the same. Unfortunately TV rights prevent that. Cool to watch a little bit of fast swimming in that very political day in France. Can’t wait to see what Scott and Guy have in store in the 200 free.

It’s great apart from the guy doing the poolside interviews, who I can only assume has no swimming background whatsoever…

It is a great improvement on what we used to have – no coverage at all. It also seems like the graphics and camera angles are being tested out this week as they keep changing from session to session. I’m liking the finishing flashing up on each lane with names next to them.

your politics is even worse than having Trump as President