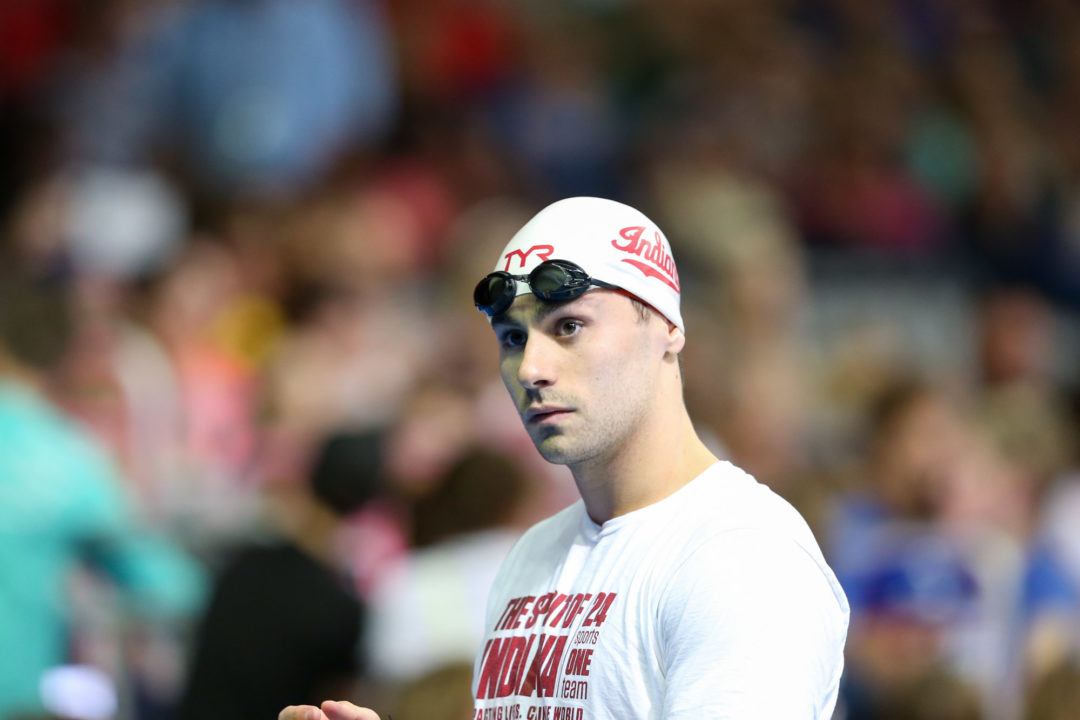 Blake Pieroni is leading the charge for the Indiana Hoosiers. Archive photo via Tim Binning/TheSwimPictures.com

Much like the Minnesota women had their conference win streak cut short last year, this may well be the year that the Michigan men fall short of a Big Ten crown. Hit hard by graduation losses, as well as losing 2016 top 8 B1G finisher in the mile Ian Rainey, who transferred to NYU, Michigan is not heading into the conference champs with the same chip on its shoulder.

Meanwhile, Indiana is trending up– and fast. Their freestyle depth is unmatched in the conference, and has grown considerably since just a couple of seasons ago. American Olympian (we have to specify, since the IU roster fields Olympians from multiple nations) Blake Pieroni will be a star to watch next week, as he’ll look to defend his conference titles in the 100 free and 200 free. IU has the means to take control of the Big Ten this season, and they’ll be coming in hot after an undefeated dual meet season, which included a win over defending NCAA Champions Texas.

The team battle will likely be a prime matchup between IU and Michigan, but that doesn’t mean there won’t be plenty of other fantastic races to tune in for next week. Northwestern’s Jordan Wilimovsky is another Olympian who is prepping for big swims at B1G’s, as he’ll try to reclaim his conference crown in the mile after destroying the Big Ten record in 2015 prior to his redshirt. Meanwhile, Shane Ryan is back from his year off while competing for the Irish Olympic team, and he’ll be a huge plus for Penn State as a favorite to win (at least) the 100 back.

Indiana – Blake Pieroni (junior freestyler) Ian Finnerty (sophomore breaststroker), Ali Khalafalla (junior freestyler), Marwan El Kamash (senior freestyler), Vinicius Lanza (sophomore butterflier) — This team’s freestyle relays are unbeatable, and they should be hard to catch in the medleys, too. IU is stacked, locked, and loaded and they are going to have a massive points haul in the diving events, too. Watch for any (or all) of the guys mentioned above to win an individual event next week.

Michigan – Tristan Sanders (junior backstroker), Evan White (junior IM/fly), PJ Ransford (junior distance freestyler), Paul Powers (junior sprinter), Miles Smachlo (freshman butterflier) — Powers is ready to defend his 50 free title from last year, and while they haven’t really come around yet this season, Michigan is still a deep team in most every event. The anticipated freshman class is key– if they have a great meet, the Wolverines could make things interesting for IU.

Michigan State – Jon Burke (senior distance freestyler), Alec Kandt (senior breaststroker) — Kandt has been a revelation in the breaststrokes for MSU (see: third place B1G ranking in the 100 breast). Michigan State has several names popping up in the top 25 of multiple events, which will bode well for them as they try to move up from last year’s 10th place finish.

Northwestern – Almog Olshtein (junior sprinter), Jordan Wilimovsky (senior distance), Justin Hanson (sophomore butterflier) — NU had zero freshman come in this year, but they got back Wilimovsky, who is one of the biggest stars in the conference.

Ohio State – Matt McHugh (senior backstroker/butterflier), Josh Fleagle (senior sprinter), Brayden Seal (junior distance freestyler) — Back from a redshirt year, Fleagle will do for the Buckeyes what Pieroni does for IU– lead the charge in the sprint free. McHugh is a proven juggernaut, and this is another strong OSU team that’s defined by having a huge team.

Penn State – Shane Ryan (senior sprinter), Matthew Stasiunas (senior distance freestyler), Joao Cervone (sophomore freestyler) — Shan Ryan is Penn State’s saving grace. He’s back from a year off and he hasn’t been shy this year, posting the top time in the conference in the 100 back which is also the only sub-46 performance yet this season (45.75).

Purdue – Steele Johnson (sophomore diver), Marat Amaltdinov (junior breaststroker) — Two-time NCAA champion Steele Johnson returns from an impressive summer in Rio to lead a formidable diving crew at Purdue. Amaltdinov is the defending 200 breaststroke champion who will ensure that the Boilers rack up some points in the pool.

Olympians Blake Pieroni and Shane Ryan will face off in the 100 free next week– Ryan the 2014 B1G Champion and B1G conference record holder (42.08) and Pieroni the defending champion. The two could push each other under 42, which would break Ryan’s record and send a warning to the rest of the nation come NCAA’s. Meanwhile, there are plenty of other horses in this race, including, but not limited to: Wisco’s Clifton and Pinfold, OSU’s Fleagle, Minnesota’s Becker, and a slew of IU sprinters.

Relishing in a year without Wilimovsky, and taking advantage of a poor (or just unrested?) race by Wisconsin’s Hutchins, Michigan‘s PJ Ransford took off for the B1G title, winning in 14:36.61. Ransford won by a landslide, as Hutchins touched in 2nd at 15:00.80. This year, though, things are different. Most obviously, Wilimovsky is back, and Ransford and Hutchins will likely be playing catchup on him. Intriguingly, Hutchins blitzed Ransford at NCAAs, going 14:33.09 to Ransford’s 14:51.51. This should be Wilimovsky’s race, but taper schedules always have some agency, especially in the longest event in college swimming.

Michigan‘s Dylan Bosch graduated after winning this event last year, leaving fellow Wolverine Evan White as the top returner. IU’s Ian Finnerty, Vini Lanza, and Pieroni will have some stake in this event, however. Additionally, IU’s Vini Lanza has already broken 1:44 this season, making this a deep event with no real favorite.

Michigan might still be the favorite, but not by much. They had a huge win last season, but still haven’t cemented their breaststroke leg since Bruno Ortiz’s graduation 2 years ago. Indiana might have that fly leg they’re looking for in Lanza, and their best relay this year is already almost a full second ahead of their time at B1Gs last season. You can’t count out OSU, either, who lost only their breastsstroker from last season’s relay.

Indiana is incredibly powerful in freestyle, which is perhaps the best strength to have in a championship format given the number of events in which freestyle is swum. An Olympian-heavy team, the Hoosiers don’t have any pressing issues in their lineup, though breaststroke talent Cody Taylor is no longer on the roster as of last month.

Despite IU’s rise to power, Michigan will not go quietly. Their freshman class, if it can deliver, will put depth questions to bed and bring in lots of individual scoring, while their stars are still capable of pulling in large contributions. They might not take the B1G title, but they shouldn’t slip past 2nd place– Ohio State just doesn’t have enough scoring bodies to combat Michigan.

The fun battle to watch could shape out to be the fight for fourth, which looks to be between Minnesota and Wisconsin. Neither team lost a big-time star from last season that can’t be replaced, while both teams have fairly strong freshman classes. If anything is a predictive tie breaker, it’s the fact that the Gophers won their dual against Wisconsin by 70 points.

Blake Pieroni and Ali Khalafalla are not breaststrokers. Although I don’t doubt they can swim breaststroke, they primarily sprint freestyle. Great breakdown though! Love these type of articles!

I wouldn’t be totally surprised if Blake does in fact swim 100br at conference though. He hasn’t exactly nailed the 200IM the last two years and he has gone low 54s un-rested and un-shaved in the 100br. He’s actually not a bad breastroker. But your point is valid, he is mainly a sprint freestyler. And Khalafalla is anything but a breastsroker.

Thanks for catching that, it’s been fixed!

200 free and 100 breast are back to back though, that would be an exceedingly ambitious double.

You are right, didn’t consider.

I feel like having the 100 breast right after the 200 free on Friday would be a tough double, especially considering he’d have the 200 free relay later that session.

Ortiz was not a graduation for Michigan last year (but the year before), so they won’t lose on their breastroke leg of the medleys.

Actually, they’ll likely improve on that leg as freshman Montague may be faster than senior Klein, who was the breastroker last season.

Anyone seen a psych sheet?? Meet starts tomorrow. Ohio State is the host.