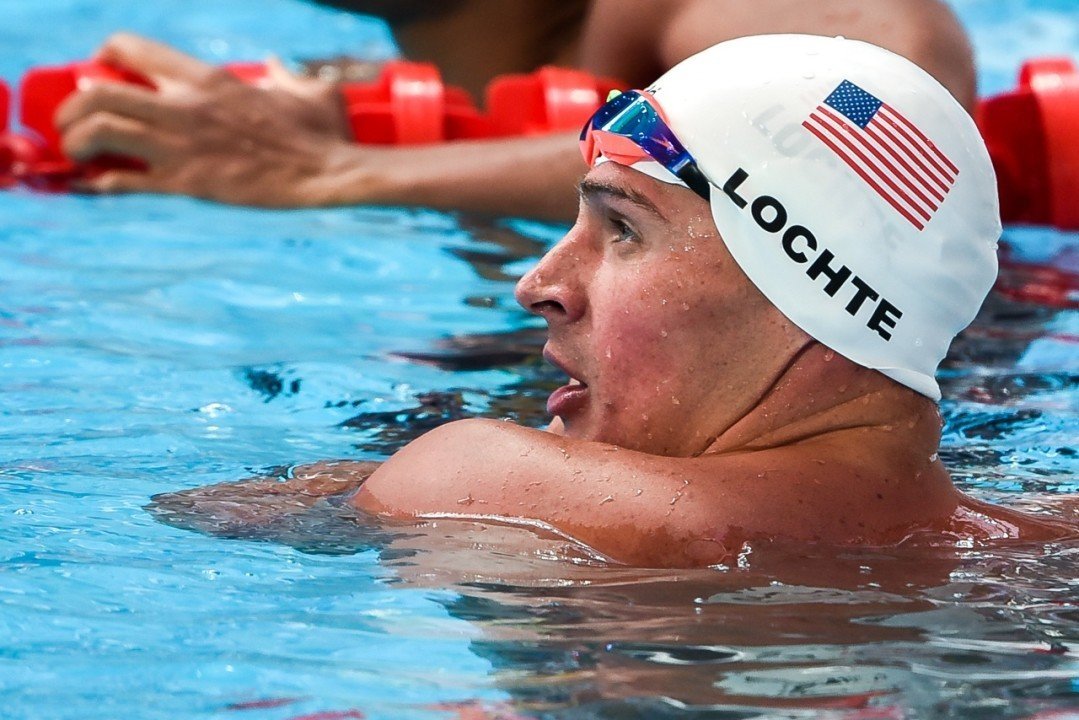 Ever since Lochte won gold in the 400m IM at the 2012 London Olympic Games, he hasn’t had a single international medal in the event. In fact, he hasn’t even competed in the event internationally since London. His lack of international appearances in this event beg the question of whether or not the 31-year-old Lochte will swim it at trials.

Considering the fact that he posted a very strong 4:12.66 at the Arena Pro Swim Series at Austin, he’s definitely in the running to make the Olympic team in the event, it just depends where is focus lies. His win in Austin was the first win he’s had in the 400m IM since 2013. Lochte loves to race, and he’s proven time and time again when he steps up on those blocks he’s ready.

Tyler Clary at Duel in the Pool (photo: Mike Lewis)

Clary trains with Lochte at SwimMAC Carolina with head coach David Marsh, and has been targeting this event throughout the last quadrennial. Last summer he finished fourth at the World Championships in this race. Besides his silver medal at the 2014 Pan Pacific Championships, Clary hasn’t exactly been the medley stud the United States is used to seeing in the hindsight of the Michael Phelps–Ryan Lochte battles of the past.

The 400m IM has still proven to be one of Clary’s best events over the best quadrennial and once that he’ll likely target for Rio.

Having both Phelps and Lochte step down from the 400m IM over the last four years has given way to a new king of American medley, and his name is Chase Kalisz. The Georgia swimmer finished third last summer at the World Championships just ahead of Clary, and has proven to be one of the top IMers in the world since taking silver in this event at the 2013 World Championships.

Kalisz is a world contender, there’s no doubt about that. He was a 4:12.80 already this season at the 2015 Winter Nationals, a stones throw away from Lochte’s leading American time. If Lochte doesn’t swim this race, Kalisz is the favorite ahead of Clary. He’s proven his speed this season and over the last quadrennial.

Younger athletes from the NCAA knocking off the older American veterans should be one of the most enticing storylines of the 2016 U.S Olympic Trials. Just like several other events, the 400m IM is no different and features plenty of new blood that will be in the running to make the team.

With the breaststroke speed that Prenot has, he’s a dangerous threat to both Lochte and Clary whose strengths lean more towards fly, back and free.

Another top breaststroker swimmer with a killer IM is Will Licon out of Texas. Licon finished second to Prenot in the 400 IM at the NCAA Championships this season, throwing down a swift 3:37.40. But Licon elected not to enter the event at Olympic Trials, instead focusing on the 100 breast on the same day.

Prenot could ultimately go that way, too. He’s entered in both the 400 IM and 100 breast, but could still scratch one or the other closer to the meet. For now, we’re including him in our picks, as the 400 IM seems like a better shot at an Olympic berth than the 100 breast.

Jay Litherland hails from the University of Georgia where Kalisz trains and has already shown some very impressive performances as a member of the US Junior National team. Litherland took home a gold medal in the 400m IM at the 2015 World University Games, and was the third ranked American in the event at the completion of last season. His time ranked him seventh in the world overall. Just like Prenot and Licon, Litherland has the chance to overthrow Lochte, Clary, or Kalisz.

Litherland’s Georgia Bulldogs teammate Gunnar Bentz is another rising young talent. Bentz was 4:14.16 at Nationals last summer and should be right in the hunt for a finals spot with his unique blend of versatility and endurance.

Andrew Seliskar is the last remaining collegiate swimmer that could really make a stand in the 400m IM. Seliskar was an age group standout and is now one of the top all-around swimmers in the NCAA. He boasts a 4:16.06 personal best in the 400m IM from the 2014 Junior Pan Pacific championships. He’s been a 3:37 in yards and will be up there to make the final and fight for a spot on the team.

The Up and Comer

Highschool senior Sean Grieshop of Nitro Swimming has proven to be very, very quick in the IMs. His 400m IM personal best sits at a 4:15.67 from last summer’s World Junior Championships where he took home the gold medal. He’s proven his speed and he’s proven that he can throw it down when it counts.

The main  swimmer who kind of eschews these categories is Wisconsin alum Michael Weiss. He’s a few years removed from the college ranks, but isn’t yet as established as Lochte or Clary. But the 25-year-old Weiss has a lot more youth than the veterans and quite a bit more experience than most of the youngsters. He swam a lifetime-best 4:12.00 at World University Games in 2013, plus competed at Pan Pacs in 2014 and Pan Ams in 2015. He struggled some in this event at Pan Ams, but could still be a finalist if he gets back to his 2013 form.

Chase kalisz will make the team.

Kalisz and Lochte (if he swims it), otherwise that second spot is up for grabs.

I don’t disagree with the picks, just curious why you think Gunnar Bentz is going to go slower at finals than he did last year at Nats?

Yeah.. Not to mention slower than he went at juniors in 2013 as well. Bad prediction IMO.

I feel like Kalisz will make the team. Prenot will be first, Kalisz second. I think Lochte will swim the event, but he’ll be upset by the youngsters. 400 IM is too grueling an event for his age.

and how is doping in that sport?

True- cycling has a lot of doping problems, but both the young guys and the older guys do it! So that doesn’t really have do do with the age of the winners.