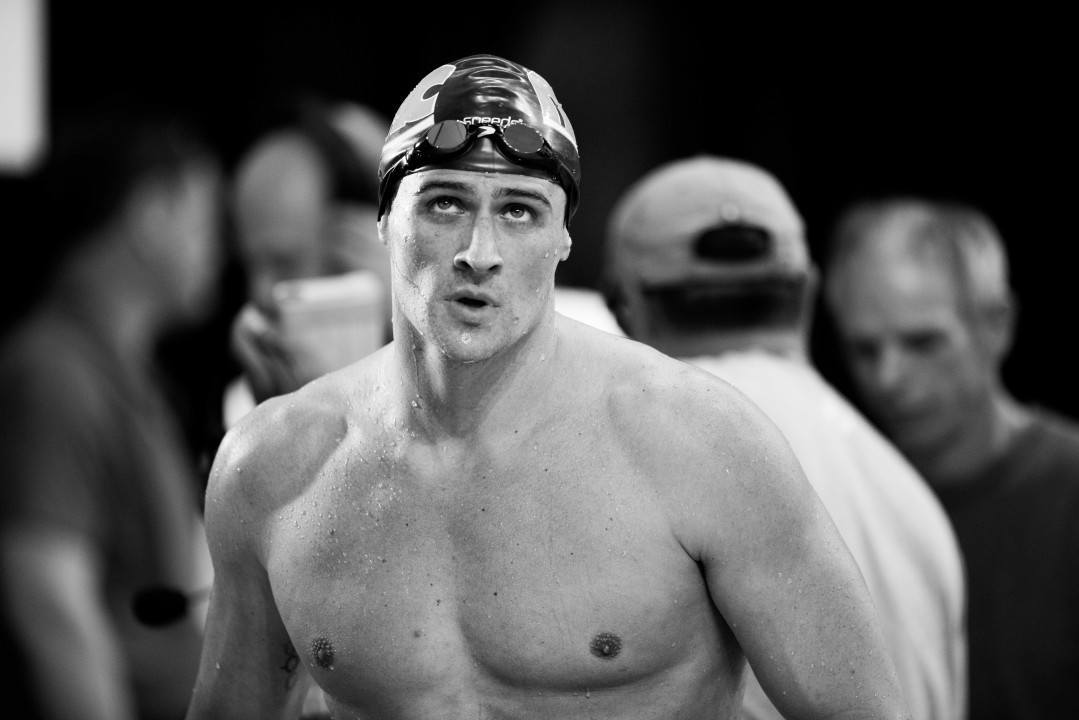 Pair that with the fact that the Americans were podium-less in the men’s 200m freestyle individual event in London, after seeing Michael Phelps reap gold in Beijing, and this longer sprint freestyle event is somewhat of a wild card worldwide in terms of players ready to take the Olympic gold individually and on a relay level.

However, from an American point of view, it is extremely encouraging that the nation’s 4th place finisher in the men’s 200m freestyle event at the London Olympic Games, Ryan Lochte, managed to fire off a time within half a second of that 2012 mark while competing at the FINA World Championships last summer.

At 31 years of age, Lochte is still going strong, as evidenced by his 1:45.36 in Kazan, although he would wind up in 4th place and off the podium. Lochte holds the United States’ fastest 200m freestyle since 2013 with that outing and represents one of just two men from his nation to clear the 1:46 mark since London.

The fastest swimmer since 2012  is former North Baltimore Aquatic Club-turned-Trojan Swim Club athlete Conor Dwyer, who clocked a 1:45.32 at Worlds in 2013. In London, he contributed heavily to the United States’ winning 800m freestyle relay, nabbing a 2nd leg split of 1:45.23 after throwing down 1:45.52 in heats. Most recently, Dwyer was 1:45.41 at the Pro Swim Series meet in Santa Clara, his fastest swim in the event since 2013.

But going without gold is much the story of this individual 200m freestyle event for the American men now that 2-time Olympic medalist in the event, Michael Phelps, seemingly has foregone the race on an individual level and is instead focusing on his fly and IM events for Trials and Rio. We’ve left him off our rankings in light of his most likely relay-only target in this event in Omaha.

With Charlie Houchin and Ricky Berens both having been a part of the men’s 800m freestyle relay and having since retired, along with an unknown status surrounding heats swimmer in the London relay, Matt McLean, any number of the young crop of U.S. freestyle talent can step up and snatch a spot in the top 12 at Trials.

Pleasanton Aquatics’ World Junior Champion in the event, Maxime Rooney, has soared to the top-tier in this event on the U.S. senior level, taking the national title in the 200m freestyle in San Antonio last summer in an incredibly fast time of 1:47.10. At just 17 years old, Rooney is still growing and getting stronger, which makes significant time drops a reality from one major race to the next. Dipping beneath the 1:47 threshold, as we’ve predicted, is completely within reach for this kid and we see him likely to notch a spot on the 800m freestyle relay, at bare minimum.

Reed Malone has done nothing but improve in his years at USC, and has proved himself a relay stud in the NCAA. Malone is also no stranger to long course, having put up a couple of 1:47s  to win gold at the World University Games last summer and competing as part of the American 4×200 free relay at Worlds in Kazan.

Jack Conger and Townley Haas also will go to battle in this highly competitive event, with both Texas athletes sitting strongly in the 1:47-mid range.  Haas’s improvement in the NCAA this year (which crested with the fastest flat-start and relay-start 200 frees in history) probably give him the edge. Haas will be coming off the 400 free a day earlier, though, and Conger should be fresh for the 200, so there’s certainly a possibility the Longhorns swap spots.

Another young stud towards the end of our top 12 predicted finalists is Mission Viejo’s star Grant Shoults, a possible sleeper in this race. Having fired off a 1:48.10 opening split to his squad’s 800m freestyle relay in addition to finishing as runner-up behind Rooney in the individual 200m freestyle event (1:48.42) at last year’s World Junior Championships, 18-year old Shoults has high-pressure experience and is on the cusp of at least a 1:47-high race.

Also in the mix in our projected top 12: Wisconsin pro Michael Weiss and Texas Longhorn alum Michael Klueh were both part of the World Championships relay last year, and Weiss had a big 1:46.1 split in prelims to earn a spot in the final.

Meanwhile back in the U.S., Badger Swim Clubber Zane Grothe and Indiana Hoosier standout Blake Pieroni were each dropping absurd amounts of time at U.S. Nationals. Grothe dropped from 1:50.3 to 1:47.1 and Pieroni cut from 1:48.8 to 1:47.3 as the two took second (Grothe) and third (Pieroni) behind Rooney.

Aside from our top 2 picks in Lochte and Dwyer, the remainder of the 10 selected athletes we predict to finish in the top 12 are all separated by just over a second based on their best times since 2012. That speaks to the depth of this event for the stars and stripes, but also speaks to the fact that there’s no stand-out ace up America’s sleeve, such as Japan’s Kosuke Hagino or Britain’s James Guy.

American men will need to not only throw down near lifetime bests to capture even a relay spot, but they’ll need to also throw down the hammer in Rio to be internationally competitive both on an individual and relay level.

Agreed with that – the fastest 200 freestyler in Usa right now is Dwyer – he has seriously put the gears in mode “super drive- come and catch me if u can ” . Dwyer first at Omaha in a 1.44 high – Lochte second but might get challenged by some guys like Rooney , HAAS of course , McLean is coming back as well , Conger or Grothe .

Swimmers from Trojan don’t drop a ton of time at taper meets, so I’m not sure what to expect from Dwyer. The last time he was in this position, he was swimming at Gator, and they always drop a chunk of time at Trials and then more time again at the Olympics. It’ll be interesting to see what he does. I think his 200 will definitely be better than his 400.

lovely joking prediction – Nobody will touch the Usa on that relay – Oho – Not this year . Sorry

Agreed with Ervin us will be close to under 7:00 and will win by 1 or 2 seconds

Yang has chickened out of most of his races since Worlds with a “heart problem”. Funny how heart problem could be code for steroids.

Since this would be Phelps’ first event (days 2-3) of the meet, and also not conflict with his other events, I believe that he will swim the 200 all the way through to and including the finals. I also predict he will finish in the top 3. If he finishes in the top 2, and makes the team in his other events, he will drop the 200 free at the end of the trials — as he did in 2012.

There is a lot to be said about making the team early. And I believe that’s what he will do by swimming the 200 free.

The big Phelps conflict would be the 200 free final and 200 fly semifinal on day 3 with only three events in between. That would be a rough double, but it all depends on what Phelps feels he can and can’t do physically in Omaha.

Phelps should be able to qualify for the 2 fly finals either way…right? Though that double could end up tiring him out for the rest of the meet, so. Could go either way.

It’s certainly possible. He’s Michael Phelps – no one comes out ahead betting against him. But that 200 free/200 fly double is no joke, especially at age 31. I think that’s why we saw Phelps talk about trying to earn a 4×200 free relay spot in Austin. He’d prefer to not swim that double in Omaha if he can avoid it.

Wouldn’t Phelps’s in season times from this year (from the pro swim series meets) be enough to make finals in Omaha? It doesn’t matter what he qualifies in, he just needs to make top 8. Then he can worry about the win the next night.

I don’t think Michael has to do squat at Trials to be on that relay. If he is on the team, he will be on that relay!!!! Remember who the head men’s coach is!!? He will chose that event if he has a better shot to medal than 2fly

The 200 Free is Phelps ace in the hole. I bet he races prelims, semis & finals and makes our Olympic team. He should be fine with doubling the 200 FR Final & 200 FL Semi Final in the same session. They are 3 event apart and the timeline moves slowly with the walk outs, intros, breaks for commercials, and award ceremonies . My guess is if/when MP qualifies individually in his primary events 200 FL, 200 IM & 100 FL, he’s likely to withdraw from the 200 FR like he did in London. But the 200 FR is his safety net & will be his first opportunity to get on Team USA.

Jared Anderson has pointed out that there is a minor conflict (for Phelps) on day #3 of Trials between the Final of 200 free and the Semi-final of the 200 fly (separated by only 3 events).

I submit to you that if Phelps is even mildly intimidated by the Trials’ 200 free final /200 fly semi (where he only has to finish in the top 8), then he has no business even considering the Olympic 200 fly/800 free relay combo six weeks later.

That’s a valid point, too. My gut tells me he’ll wind up crushing both swims at Trials, and we’ll all be left wondering why we doubted Michael Phelps in the first place. But it’s still hard to always project superhuman results for a 31-year-old swimmer in some of the most brutal doubles in the sport.

I agree that he might chose the 2free over the 2 fly. He indicated in one of his FB live convos that is looking at trading a couple events but will see how he feels leading up to Trials. He isn’t trading out 100 fly or 2im so that leaves 200 free and 2fly. Flyers might be celebrating!!!!